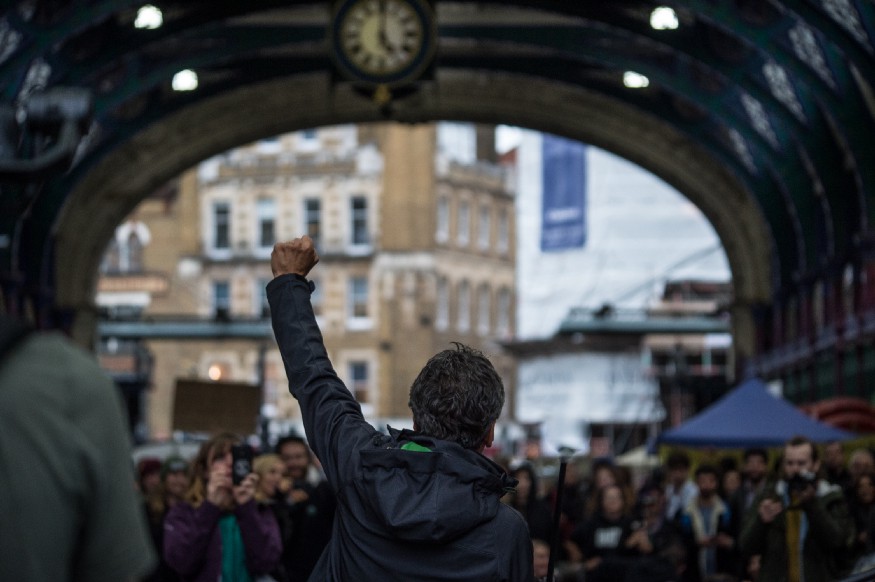 The Autumn Rebellion saw a huge increase in numbers since the last big rebellion in April. Many of these supporters found themselves on the streets on 7th October protesting, for the first time in their lives, for a reality we can no longer ignore: the animal and climate emergency. Hear from two first time rebels who joined Animal Rebellion on day 1. Myra tells her story of an emotional march to Smithfield Market and being inspired by George Monbiot’s powerful speech. Jennifer gives a passionate account of finding her voice in solidarity with like minded people, who want to put the environment and animals first and transition to a plant based society.

REFLECTIONS OF A DAY TRIPPER

7th October 2019 isn’t a day I’ll forget in a hurry. In the run-up to the Rebellion I was struggling to know what to do. I felt pretty sure I wasn’t up for camping in the street or being arrested. But how could I ignore this important movement, calling for the changes closest to my heart — a world in which animals are treated with respect and all of us are kept safe from the worst impacts of climate and ecosystem breakdown?

I decided to book a train ticket and get myself to London for the day. I feel privileged to have been part of the day that set up the first fruit and veg market at Smithfield. Will we one day see only plant products on sale in the famous old market? I hope so.

I arrived in London, travelling from West Yorkshire, in time to join the rebels gathering in Russell Square. There I met up with Sara and Kerri from Manchester Animal Rebellion — very happy to have found them in the large crowd there. I also bumped into someone wearing the same boots as me, from Will’s Vegan Shoes (other brands of vegan footwear are available)!

After a couple of short speeches, some practical advice and singing practice, we set off on our march to Smithfield Market. Along the way we sang and chanted while people in office buildings stopped work to watch and take photos.

As we approached the market I began to feel quite emotional. I wasn’t sure whether we were about to enter a place where we would be surrounded by meat, but that wasn’t the case. No meat was evident that afternoon. We took up our place in the arcade that runs through the building. Work began on setting up the market stalls, and later stocking them supplies of beautiful fruit and veg. Meanwhile at the other end, live music was played. It was an international event. I met people from Croatia and from Italy. There were some very young children there, a reminder of why we are doing this — to try to ensure a safe future for their generation.

I was so busy helping to pile vegetables on the market stalls that I missed the start of George Monbiot’s speech — I’m afraid I abandoned the task when I realised he was speaking. I’d heard him speak before and knew we could expect something special from him, and he didn’t disappoint. He spoke of the centuries and millennia of conditioning we have to unlearn in order to accept the necessity for a world which is not shaped by animal agriculture. From classical and renaissance literature through Romantic poetry to children’s books, we have grown up in a culture which presents the rural idyll as something to yearn for. The innocent picture of people and farm animals living in harmony. The truth of animal agriculture, we now all understand, is very different. Examples of the disastrous nature of livestock agriculture and fishing came thick and fast in a fact-filled and inspirational talk.

George reminded us of the damaging environmental impact of livestock, whether farmed indoors, or in free range systems. Run-off from free-range farming causes harmful algal bloom in rivers. Sheep farming uses twice as much land as the UK’s entire built environment while producing just 1% of the nation’s food. Meat products from local farms may well come from animals fed soya from Argentina. Blue Planet 2 alerted us to the horrifying impact of plastic in the oceans without pointing out that most of that plastic comes from the fishing industry.

We know about the Sixth Mass Extinction that we are in the midst of. George has renamed it the First Mass Extermination, because extinction sounds like something that just happens. What is happening now is something we have done.

Monbiot was followed by Dominic Dyer, CEO of the Badger Trust, who spoke passionately about the cruelty and obscene ineffectiveness of the badger cull.

Later came a talk by another icon of our movement, Chris Packham. I’m sad to say that I had left before he spoke but his talk, as well and George Monbiot’s and Dominic Dyer’s, can be found on Animal Rebellion’s Facebook page.

There was just one arrest during Animal Rebellion’s day at Smithfield Market — of the person who scaled the market building to fly the banner heralding the arrival of Smithfield Fruit and Vegetable Market. Although it all happened in a place where the bodies of innocent victims of the agriculture industry are taken for sale, it was nonetheless a joyful day, looking toward a better future.

Events became more sombre during the night, long after I had left, as the deliveries of meat began to arrive. A funeral procession was held in memory of the animals, and this can also be seen on the Facebook page.

My thoughts now, in the comfort of my Yorkshire home, is with the brave rebels who have taken up their positions at Westminster. The police have warned that anyone protesting other than in Trafalgar Square risk arrest, so it remains to be seen how long this rebellion will hold its ground.

With the news dominated by Brexit this vital act of rebellion for the future of our planet is not receiving the coverage it deserves but with right on our side we have to remain hopeful that people in power will hear and act in time.

I’ve been vegan for 4 years, and vegetarian many more — a long period of time for anybody to be in a frustrating minority when it comes to ethical common sense. As anyone who eschews consuming the fruits of exploitation, my diet has been called extreme, ridiculous. And so I have taught myself to sit down and shut up. We see injustices — every day — committed by our nearest and dearest, and if we speak out, we are preachy and self-righteous. I have kept quiet and laughed along all my vegan life.

And so I cautiously shuffled into Russel Square yesterday, unsure what to expect, but with the heavy anticipation of knowing that something big was brewing. And I was not prepared for the overwhelming emotional journey that I would undertake. For the first time, I was surrounded by those who actually care, about the devastating effects of animal agriculture. I was no longer alone, defending an unpopular pipe dream to friends who think a legitimate response to global deforestation is ‘but, bacon! LOL’.

We left Russel Square, and soon the chants and songs I had self-consciously muttered along to, I was yelling proudly to an exuberant crowd as the drums beat and the flags announced to the world that change was coming. I had expected jeering, and dismissal, but the lone egg that bounced off the pavement by us somewhere around McDonalds was nothing compared to the peace signs, dancing and waves that poured down from the office blocks where workers watched us pass. At these first suggestions at the mainstream acceptance of veganism, I was overcome.

But we are here to disrupt, and so we chose a junction, and en masse we sat to halt traffic and shout out our cause. Here, my first act of civil disobedience. A quiet came over us, in stark contrast to the raucous energy of moments before. Hundreds of rebels fell silent, as a single voice softly sang a song of liberation. It was a very poignant moment. I reflected solemnly on the suffering of animals and of Earth, and the magnitude of the challenge we faced.

And then we marched on, and I stole a glance at the buses who had been stuck waiting, at the reactions of the public whose day we’d frustrated. I tried to convey my apology, and expected to see anger. I did. But amid the frustrated masses, people smiled. They knew. And now, so did I.

Reaching the market, our immense symbol of hope for a new world, I was unprepared for the stench of the blood. I spoke to a girl who wept as we committed to grin and bear it in the name of all we were trying to achieve. But it was the positivity, not the negativity, that changed my whole identity as a vegan human being.

Because stripping Smithfield Market of its cruelty, didn’t mean stripping its identity. We aren’t here to end the meat industry, just to change its ingredients. We don’t want to see farmers desolate, but to see them thriving, producing the wonderfully varied food of a sustainable society.

I think veganism has this image of trying to tear down parts of normal culture, and from a carnivorous perspective it seems insane, over-the-top, extreme. But what could be more everyday, more representative of the elegant simplicity of a plant-based food system, than a market reimagined? How much plainer could we show the world that our vision is not extreme, militant nor insane, but simply beautiful?

Until every cage is empty.

Until the consumption of meat is called barbaric.

Until global deforestation is halted, and ecosystems thrive.

Because another world is possible. And we are unstoppable.

Eyewitness Rebel Stories: Speak Up and Be Heard!
Scroll to top