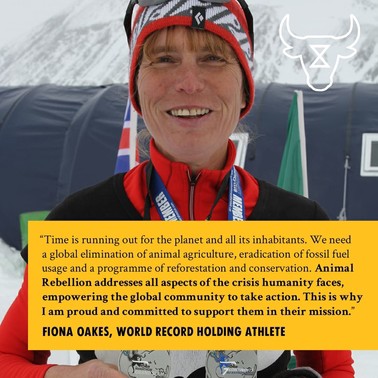 Fiona Oakes is nothing short of true inspiration.

As a teenager, a knee condition left Fiona without a kneecap. In and out of doctor appointments and surgeries, Fiona was told that she would not be able to walk soon.

Without coaches who believed in her ability to run because of her plant-based lifestyle; without any professional knowledge of marathon running; and whilst caring for hundreds of animals, Fiona became a world-class runner with marathon records in every continent.

Why does Fiona keep running?

Her drive to run marathons does not stem from a desire for running. It comes from a deep-rooted passion to show that a plant-based lifestyle is enough to do anything.

In 2002, television and radio were the main sources of media attention. She saw how Paula Radcliffe was doing well and getting television recognition for breaking records for women marathon runners. So, Fiona decided she would show the UK that “ long term plant-based is in no way prohibitive to achievement even in, what was considered at the time, the toughest endurance event in the athletic calendar.”

Fiona set a new world record at the Marathon Des Sables — one of the most extreme races in the world. You can watch her journey in the film documentary, Running For Good. The marathon is the equivalent of 6 back-to-back marathons over 6 days; and crosses 250km of sand dunes, mountain ranges, dry lakes, and abandoned villages. The temperature in the Sahara can reach up to 50C and people have died during this race. All of this and without a kneecap.

Her drive? The animals.

Though you would think that someone setting marathon records across the globe wouldn’t have time for anything else, Fiona is the carer of over 550 animals at the Tower Hill Stables Sanctuary, founded in 1996. Its mission is to “provide care and a forever home to animals in need.”

“There are dogs used for fighting, rescued chickens, pigs, lambs. Hundreds of curious and timid eyes watched us approach. From Highland Cows to Polo horses, Fiona shared with us their history, their personalities, and stories behind their journey to the sanctuary.

We had long conversations about their [animals] relationship to the local vets. The cost of taking care of so many beautiful beings is high, so it’s a very interesting relationship between a sanctuary and the vets compared to the relationships they would have with farmers. The biggest costs of keeping the sanctuaries running are for feed and for veterinarian care. When you see all the horses and cows, you truly understand the scope of the project.”