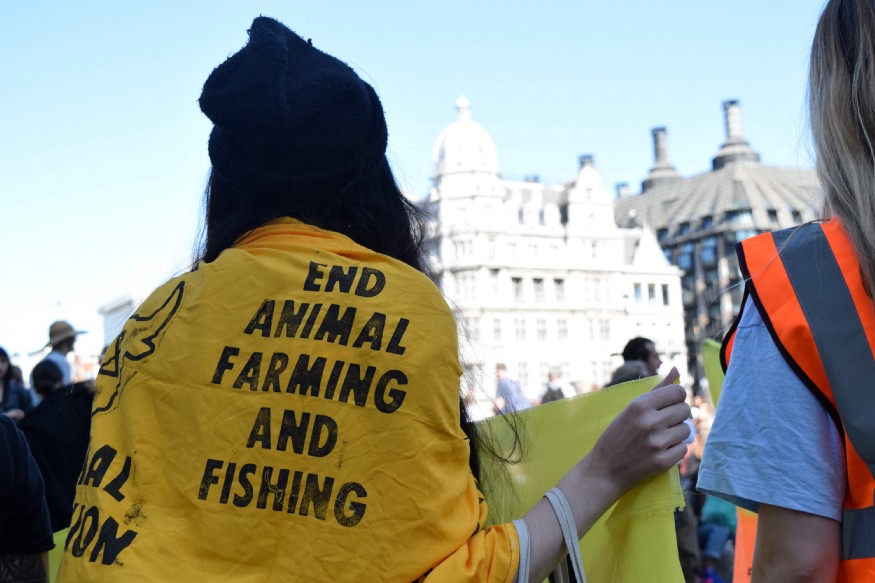 In mid-Autumn, when the evenings grow darker and temperatures fall, Animal Rebellion wants you to leave your safe and cosy homes to spend several nights camping on London’s streets. Yes, there’s a certain romanticism about abandoning the comforts of ‘normal life’ and committing to the cause for a few days. ‘Drastic times call for drastic measures’ and in our most fervent fantasies, we’re all hypothetically willing to partake in such noble but extreme acts.

Even though we’ve been promised a peaceful and joyful time — of community-building and self-development, social activities, training, talks and entertainment — and water, food and toilets too — however vibrant, colourful and playful the site may be, this is by no means another Vegan Camp-Out.

Taking part in a protest is a daunting prospect. That it involves camping in the middle of a major city — all the while being scrutinised by the press, public and police — makes it even more so. Thankfully others have gone before us . And the experiences of those plucky past rebels provide lots of opportunities for learning, motivation and reassurance.

Below are some recent examples to get you in the spirit for our occupation.

In May 2010, a peace camp known as Democracy Village was established in Parliament square. Its initial aim was to protest the British government’s involvement in Middle Eastern conflicts, but it soon morphed into a broader anti-capitalist demonstration. Within two weeks a few tents had become 30, as activists embedded themselves on the grass, defying city bylaws which prevent encampments around Westminster.

The site was well-organised during the eighteen months it managed to resist eviction. A 24-hour information desk provided visitors with leaflets detailing the different groups and interests represented in Democracy Village. Residents created a vegetable patch and planted sunflowers, strawberries and an oak tree.

A large central tent was used for meetings, talks and workshops. Banner-making also took place there — several colourful banners were dotted around the site, highlighting various causes which included everything from the evils of globalisation to climate change. Another tent acted as a communications hub, enabling residents to access the internet whilst inside.

Numerous useful items were donated or procured from nearby skips, such as a wooden cabinet for locking away valuables, comfortable office chairs and pallets to pitch tents on so they avoided contact with the wet ground. Some protesters even had mattresses to sleep on.

Residents wore thick jumpers, fleeces and hiking boots and they would often gather around braziers at night for extra warmth. Eight compost toilets ensured those living at Democracy Village could remain there regardless of nature’s calls. Though, being in central London, people could easily access local pub, cafe or restaurant facilities if they wished to freshen up.

Democracy Village had a kitchen too and protesters would take turns to collect food items, water and other necessities from establishments close by.

Those who occupied the site spoke fondly of being surrounded by London’s beautiful architecture on all sides. And the setting took on a certain unrivalled charm as the sun set each night and the stars descended over their makeshift home.

What started as a demonstration in support of the Occupy Wall Street movement quickly transformed into a large-scale campsite outside St Paul’s Cathedral.

Around 2,500 people originally planned to occupy the London Stock Exchange on the 15th of October 2011. Anticipating the disturbance, police prevented demonstrators from reaching the site, forcing crowds to amass near the cathedral steps. That night an estimated 150 people set up a camp that became a permanent fixture for the next four months.

In the days following October 15th, more people relocated to the site and pretty soon a festival atmosphere emerged as those who had braved the cold weather started organising for a longer stay.

Tarpaulin shelters were erected to protect campers from strong winds. A fully compliant kitchen was established and, like at Democracy Village, protesters brought wooden pallets to the site for insulation. Protesters replaced pegs with gaffer tape and heavy objects — including leftover bundles of the Evening Standard — to keep their tents upright and stable on the concrete floor.

A cafeteria area located next to the kitchen provided space for people to eat, as well as acting as a drop off point and storage area for donations. Donations were key to the camp’s upkeep. As well as food and water, these included finance (cash and cheques), camping equipment and even toys and nappies for children and babies.

Other dedicated areas included an entrance and welcome desk, a first aid tent, a library, a university with a daily lecture schedule, a legal advice centre and a recycling point. As the camp swelled to circa 300 tents, the City of London was forced to provide recycling bins and portable toilets.

While 300 people moved permanently to the Occupy camp, the site swelled to over 1000 activists during the day. Teams were established to manage various aspects of camp logistics. They included a food team, as well as art, entertainment, cathedral liaison and media — the latter had access to a large ‘tech tent,’ which by the end of the occupation resembled the inner workings of a television station.

A camp meeting or ‘general assembly’ took place each day at 7 pm. Up to 500 people would attend and discuss strategy and actions moving forward. Music, dancing and singing was a constant feature, and a football match would often take place between camp residents and city workers who had come to debate with the demonstrators.

Despite the onset of winter, those who participated in Occupy London remained undeterred as they became absorbed in the emotional, transformative and spiritual atmosphere. And almost ten years later, the movement still runs projects and events in and around London. A documentary about the protest and its legacy was released last year.

Who else better to take inspiration from than our own ally, Extinction Rebellion? Animal Rebellion is committed to following XR’s demands and they were active on London’s streets only a few months ago.

Many came prepared for the planned two-week obstruction with tents, gazebos and other camping gear, along with a whole host of protest paraphernalia such as banners, costumes and chalk, as well as potted plants and trees, a mobile stage and a skate ramp.

While XR rebels embedded themselves at these sites, as well as pitching tents on Hyde Park, Marble Arch became the base camp for operations. Like Democracy Village and Occupy London, the site included information stalls, an area for donations, food kiosks and regular craft workshops. Clothing lines for dirty laundry were erected too, as the square was transformed into a temporary home.

Protesters chalked nearby roads in bright colours, planted flowers and came together to plan actions around the city. A local choir and a Morris Dance Troup performed at the site, and talks were delivered by XR and teenage activist, Greta Thunberg.

An Easter Sunday service with readings and singing was delivered by Green Christian. And that night trip-hop pioneers, Massive Attack, surprised rebels with an impromptu DJ set. The camp was disbanded after 10 days, but 48 hours later a stencilled image appeared on a nearby wall, believed to be an endorsement by iconic graffiti artist, Banksy.

Hopefully reading about the experiences of others has helped calm your nerves and inspired you to act.

Remember, Animal Rebellion’s October action is transformative — and just like past demonstrations, we’ll be creating a space together with a DIY ethos to show what is possible and provide you with all the support you’ll need. Have fun and be joyful!

The more people willing to stay for 24- hour cycles the better, but turning up for one night and taking part is just as helpful.

If you’re willing to join the protest from the 7th, it’s essential that you come prepared. There are plenty of ideas above for what to take with you in October. And Animal Rebellion kindly provide a long list of protest supplies to consider bringing along. If you haven’t seen this yet, here it is — the key message is ‘think reusable.’ Of course, some of the items on the list depend on what role you’re thinking of playing.

See you on the streets!

Preparing for a Peaceful Rebellion: What You Really Need to Know about Protesting Overnight on the Streets of London
Scroll to top
PLANT-BASED FUTURE ACTIONS HAPPENING NOW!