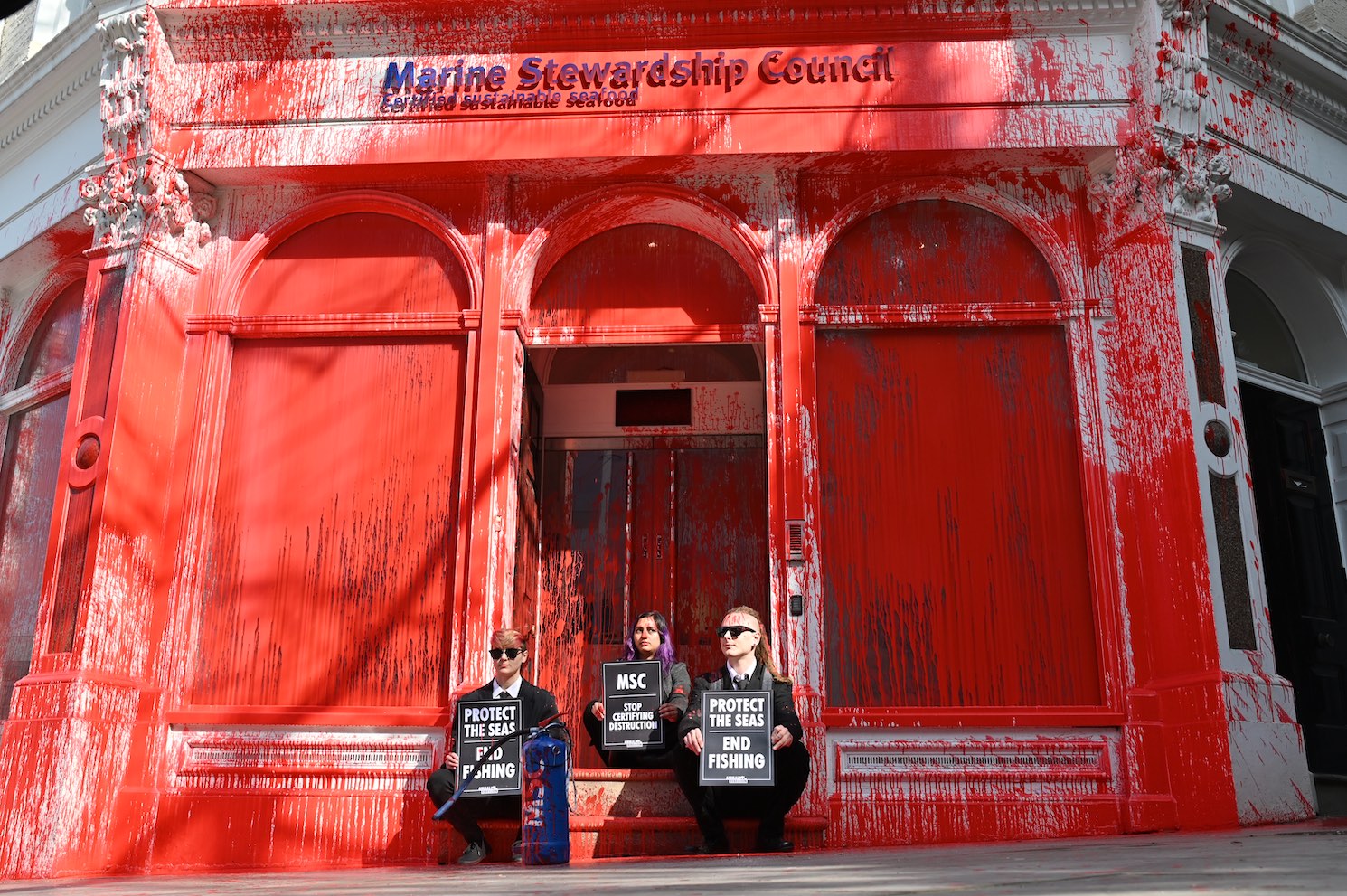 Four people have sprayed the headquarters of the Marine Stewardship Council (MSC) blood red, to call on the organisation to stop certifying the fishing industry and support a just transition to sustainable industries.

Orla Coghlan, a spokesperson for the organisation who attended the action today, said: “Evidence has shown that our oceans could be empty as soon as 2048 because of fishing. The MSC has a responsibility in their claims to be sustainable. They have a duty to revive the ocean when species are going extinct. The solution to fishless seas and ocean acidification is obvious: the government and the Marine Stewardship Council need to fund a just transition from fishing to sustainable plant-based agriculture, such as seaweed and legumes. The MSC are responsible for ensuring ‘sustainable’ fishing, however scientific evidence has shown that it is not possible to sustainably fish in our seas.”

Animal Rebellion demands that all MSC certified fisheries stop fishing immediately in order to reverse the depletion of our oceans. They also demand MSC to stop handing out ‘ecolabels’ to supermarkets and fisheries that have been proven to contribute to marine destruction.

This protest follows increased scrutiny of the Marine Stewardship Council following the 2021 film Seaspiracy, which exposed troubling systemic flaws in the labelling scheme. The film, which was released a year ago this Thursday, pointed to the inherent conflict of interest involved: the MSC is funded by the licensing fees paid by certified fisheries and supermarkets, a model that other labelling schemes such as RSPCA Assured and Red Tractor also adopt.

In 2016 a leaked report from WWF who co-founded the MSC in 1997 pointed to “troubling, systemic flaws,” in the certification scheme while last year the director of the WWF Mediterranean marine initiative stated that he “would not trust all of the fisheries to be sustainable.”

“Despite increasing warnings of imminent climate catastrophe, these certifiers continue to promote these destructive industries.” Said Animal Rebellion spokesperson, Harley McDonald-Eckersall. “We’re here today to demand that they stop the hypocrisy and stop condoning an industry that is destroying the planet and killing the animals they claim to protect. A fully just, sustainable plant-based food system is the only way forward.”

Animal Rebellion is demanding that the Marine Stewardship Council stops all fishing in its fisheries and stop handing out ‘ecolabels’ to supermarkets and fisheries that have been proven to contribute to marine destruction.