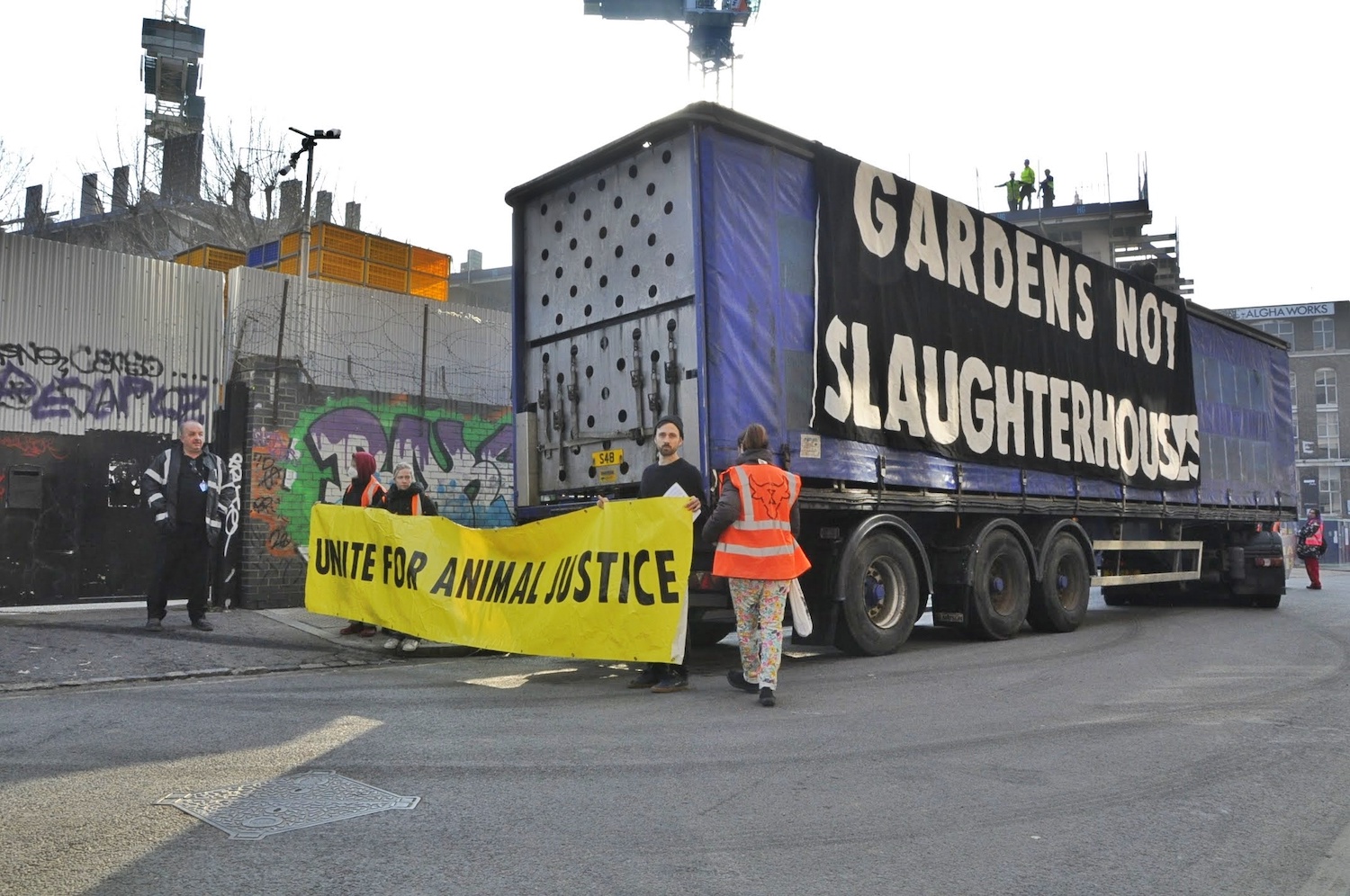 Animal Rebellion campaigners are calling for an end to the last slaughterhouse in London in a protest against climate change and animal suffering. Early this morning, Gardens Not Slaughterhouses campaigners blocked the trucks coming out of the Kedassia chicken slaughterhouse in East London, disrupting its operations. The protestors have climbed an empty truck, preventing it from leaving. Those involved said that they waited for the chickens to be taken inside before blockading the entrance so as to not prolong their suffering, but are now disrupting the operations of Kedassia slaughterhouse.

Miranda Whelan, a spokesperson for Animal Rebellion, said “We need to build a just and sustainable future by replacing slaughterhouses, which kill gentle and intelligent animals and damage the environment, with community gardens. Gardens improve the wellbeing of the local people and allow them to grow healthy, sustainable food. We are demanding that Kedassia shut down and let this land be used for something that will benefit the whole community.”

Animal agriculture contributes at least 18% of global emissions, 70% of agricultural emissions and up to 80% of global deforestation. Slaughterhouses also use high amounts of water – ‘between 6 and 30 cubic metres per tonne of product.’ Today’s action is part of a campaign to demand that it be replaced by a community garden, amidst local efforts to make London greener and more sustainable.

Every year in the UK, 950 million of the 1.1 billion land animals killed for food are birds. Kedassia, a slaughterhouse on Smeed Road in the borough of Tower Hamlets, kills thousands of chickens every week. Poultry slaughterhouses release large amounts of waste into the environment, found the Food and Agriculture Organisation, contaminating lands and and surface waters, causing a serious human-health risk.

Bel Jacobs, a local resident, said “I’m a mother and I know that our kids need a space to learn how to grow vegetables, not kill birds. Community gardens would give us a much-needed green space and a social hub where everyone can meet and connect.”

The protestors ensured that no chickens were inside the truck when it was stopped, to avoid prolonging the birds’ suffering.

Animal Rebellion is a mass movement using nonviolent civil disobedience to call for a just, sustainable plant-based food system. To find out more about Animal Rebellion visit our website: https://animalrebellion.org/