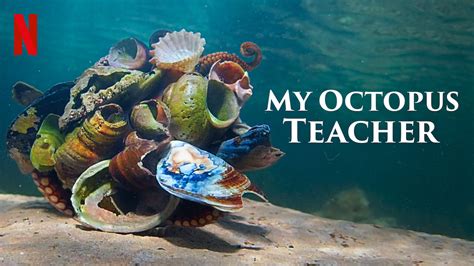 Finally, you see her. She is looking at you. Cautious yet curious – you are a new creature in her world. An orphan, she goes her own way, creating ever-changing costumes to fit the various situations she finds herself in, navigating her complex environment. Nobody taught her how to behave, yet she thrives, learning quickly.

She innovates. When you first encountered her, she was so shy she hid herself beneath an improvised shield. Discreet, she scrutinised you with one of her keen eyes. Always eager to learn, perhaps she wondered: are you a threat?

Plunging in clear water to clear your mind from the chaos of the world, and here you are – meeting her. Entering her world of mesmerizing colours and diverse communities. Slowly, you build trust with her. Day by day, you both become closer. You let her hold your hand…

She becomes your teacher.

As she is an octopus and you are a human, she teaches you how to relate to other creatures. You slow down to notice the traces of each and every animal1, the diversity of the environment. In the three dimensions of the South African ocean, you learn to reconnect with your own inner animal as the rift between the animal and you narrows. You discover that you too belong to the natural world.

She was striking, a tiny creature full of wonderful arms, and you became enthralled. Because she was the only one of her species, she stood out and you saw her as one of a kind. You saw schools of fish since you conceptualised them as a group, not individuals. You perceived the individuality of this octopus.

You spent time with her, got to know her and her temperament. Through your daily encounters you created a cross-species bond like you had never encountered before. She was living in such a different world, she had neurons in her arms, no bones, and still she was witty. How strange is it that you had to dive so far away from your comfort zone to connect with another animal to such a deep extent?

From over 20 years of filming documentaries, and living in a divide between most humans and other animals, between our civilisation and what we distantly call « nature », Craig Foster became depressed. The documentary maker was scuba diving into the eerie forests of kelp to heal his soul. Deep under the sea, the octopus taught him he was part of the natural world. For she has purpose, can fear and love, she is an actress in her environment. My octopus teacher, a 2021 Oscar winner documentary, tells their story.

« A lot of people say an octopus is like an alien. But the strange thing is, as you get closer to them, you realize that we’re very similar in a lot of ways. » Craig Foster

Octopuses have an exquisite ability to camouflage and communicate through their skin coloration and changes in texture and shape. After she disappeared for several days, Foster acted like a detective and investigated where she could live, looking for traces of her movements. When finally he spotted her, it is as if he had metaphorically rejoined « nature » and the animal kingdom; he was embedded in the environment. He was not a visitor anymore when she chose to develop a bond with him.

We are a social species where trust is deeply important. Cephalopods live very different lives from ours, swimming, alone, dying at one year old, before their babies hatch. Yet we share with them this curiosity for another being, a capacity to learn and be playful. What is more beautiful than the trust and curiosity of another being that experiences the world through a strikingly different nervous system?

His deepest joy is feeling the trust of the octopus, this tiny wild mollusc, towards him.

This film shows that if humans can relate to a mollusc, then surely we could relate to pigs, chickens and fishes who have far more similar nervous systems to us and who, like us, can feel emotions.

From a distance, we only see a school of fish, a flock of sheep or a factory farm full of chickens. Yet far from being a mass of indistinguishable creatures, animals are individuals. This intuition has often become lost by the human domination of other animal species, the disconnect from the natural world and consistent exploitation of animals for money. Yet, we can rekindle it. We all share emotions, the possibility to move and make decisions, and the desire to live. Each animal wants to be free of suffering. Should we kill animals who want to live when we can thrive on plant-based food ? Absolutely not.

Let’s switch the narrative from resources to conscious beings.

Increasingly, movies portray animals as relatable characters with goals and aspirations, while keeping them different from humans. “Babe” pioneered the representation of farm animals with a piglet making decisions and, crucially, making friends. In “Finding Nemo”, we root for a father clown fish as he embarks on a quest to rescue his son. In “Spirit: Stallion of the Cimarron”, a horse refuses to let go of his hope to find back his freedom and loved ones. These movies depict animals as creatures who differ from one another, who forge relationships and memories through painful and happy moments.

We need more trust, compassion and empathy. We can learn so much by simply slowing down and observing closely. The octopus taught us friendship extends across the frontiers of species. If we can relate to a mollusk, surely we can relate to animals who have a spinal cord, such as pigs or salmon. We need to reconnect with other animals and see them as individuals rather than concepts. Let’s learn from individuals from other species.

On the 31st of October, the COP26 started, the UN Climate Change Conference which aims to speed up changes we must implement to meet the goals of the Paris Agreement. Despite causing at least 18% of global greenhouse gas emission, animal agriculture and fishing are rarely challenged,  or even mentioned in the COP26 goals. The governments can choose to transition away from a system that kills billions of animals and destroys the planet and build a just and sustainable plant-based system. You can join on the ground or remotely. We need everyone to rise as massive waves to create a kinder, more sustainable world!

Volunteer to help build the rebellion.

1: Here « animal » to refer to non-human animals that feel emotions (scientific evidence are compelling for birds, fish, mammals, reptiles and cephalopods) to make it more accessible and easy to read.

Read our article about climate justice: Why Animal Agriculture must be on the COP 26 agenda
Take our rebel quizz to find what team would fit you best!
How does one octopus teach us to reconnect with animals?
Scroll to top