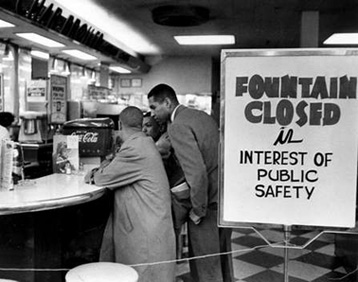 During the civil rights movement, people organised and defied the unjust laws that separated Black people from equal freedom and rights with white people. The racist laws included affected all elements of society. They included the segregation of public transport which meant that Black people were often obliged to sit at the back of the bus, even when the front was empty and were forced to give up their seat for white customers. A young girl rebelled, refused to give up her seat and was arrested however due to her youth and status she was largely ignored. She wasn’t alone though.  A movement was growing and, soon after, a woman, Rosa Parks, took nonviolent direct action  by refusing to give up her seat on a bus for a white person. She was also arrested but this time  her actions sparked uproar and people boycotted the buses, organising amongst themselves to travel to and from work by creating taxis among themselves. Their rebellion and economic pressure made the bus company face a dilemma.

This story is one of many examples. The civil rights Movement, votes for women, the independence of India, the end of the Apartheid… If you remove direct action, arguably none of these would have happened or certainly not as fast. Throughout history, people have disobeyed unjust laws to push the creation of just laws. We can learn from their successes.

What is non-violent direct action (aka NVDA)?

NVDA is bold, disruptive, and makes change happen. It is a form of civil disobedience, which means people taking direct action are prepared to face  consequences such as arrests. NVDA aims to hold accountable the government and organisations that hold a high amount of financial and political power. NVDA is organised, well-planned and creative. People put justice and freedom at the centre of the debate by putting their skills, time and energy into crafting a media-catching action. Crucially, a variety of roles support the rebels who are able and willing to break unjust laws, so that people from all walks of life can help build impactful nonviolent direct actions. No matter how much time you have, you can find a role within the movement.

NDVA is one theory of how change happens within the movement for climate and animal justice. We respect and can support other organisations who have the same aim but different ways of achieving their goals. We are a sister movement to Extinction Rebellion which also uses NVDA, and we focus our demand on a just and sustainable plant-based future.

Why would power-holders change the status-quo, if meat, fish and dairy lobbies support them through close financial and social ties? Why would the institutions whose one and only goal is to make profit agree to expand their circle of concern beyond their self-interest, for the sake of making the world better? Why would they truly take responsibility and do more than greenwashing, if we don’t use our own power to disrupt them? Direct action can serve the following purposes:

– (SHOWING) PEOPLE HAVE POWER by withdrawing our consent to the political decisions made. People empower themselves to act to create a better future. We are more than voters, we can propose solutions to the big problems of our time.

– PUTTING THE ISSUE INTO THE SPOTLIGHT, which makes ordinary people think about it. It asks the pressing question: is our demand and the current system morally right or wrong?

– CAUSING ECONOMIC PRESSURE. For instance by blocking a burger patties factory, we disrupt the company, which prevents them from making money on the back of animals on that day.

– OFFICIAL POWERS FACE A DILEMMA: They can either repress us to keep business as usual, or listen to the people and make positive changes. Even if these changes are uncomfortable, it is still better than the pressure of the media and the need to deal with the disruption.

– SO THAT STATES AND CORPORATIONS ADAPT. By displaying a positive vision we are creating a plan, an alternative to the current problematic system, that corporations and states can follow.

This did not happen overnight and required strategic planning, collaboration and sacrifice, but they did it! In South Africa, people organised and rose against the unfair Apartheid – and, ultimately, they achieved real change.

When you think about it, it kind of makes sense: Strong institutions and profit-making companies won’t give people more rights freely, if it means more equality and less profit and power for them. And yet, we can see examples of where people rising up for change has led to power holders giving over more freedom because of movements for justice.  We can see this in the abolition of slavery, women’s suffrage, the Arab Spring and  marriage equality. When facing such strong power-holders, the people can choose to obey unjust laws. Or we can choose civil disobedience, which grants us the power to disrupt.

Since they don’t listen to legal protests and only make unambitious decisions, we have to act. If not now, when? If not you, who? Too long have we waited for a plant-based world.

A human spills fake blood in a royal fountain. Another climbs up, up in the air to stay over 62 hours in a bamboo structure that will block the supply chain of a fast food company. What’s next? The aim is a just and sustainable plant-based food system that nourishes everyone.

The responsibility to care and act?

Only a few people decide how much to subsidise animal farming and fishing, and how much to invest in a fair transition to sustainable plant-based agricultural practises. These choices have dire consequences for all of us. Yet we are not happy with their slow reactions in the face of the climate crisis and the injustice to animals killed for food. We will not let them have the fate of billions of animals, humans included, in their hands. We will not let them waste public money to try to prevent an obsolete system of animal agriculture and overfishing from falling into pieces. We want to build a better system.

When scientists warned us about the causes of global heating and found that other animals can feel and build strong relationships, we voiced our concerns about animal agriculture and fishing. We walked the streets, we wrote to our MPs. When scientists found that a plant-based food system is a viable solution to the climate and environmental emergency, we gave talks. We shared leaflets and our favorite plant-based recipes. We even sometimes spoke with politicians.

These steps/activities are great but we need more to achieve a fair food transition. The current political and food systems are not just nor sustainable. We cannot wait until every person decides to go plant-based because this avoids thinking about the privilege, the food deserts and the barriers to change that we face (how about schools, offices…). Yet, every week that passes with animals behind bars and sent to death instead of freedom is unnecessary when a system that is more just for all life and our planet is out there.

Together we are powerful. We have skills and passion that are the building blocks of our movement.

Join us by giving your time to enact effective and sustainable change! We are a decentralised movement and welcome your NVDA, as long as it fits with our demands and our principles. Your background and location do not matter.

Help fuel the rebellion and support arrestees with a donation.

This is an uprising by Mark and Paul Engler. Explains the theory to build social movements, drawing on historical examples.

Don’t think of an elephant by George Lakoff, Howard Dean and Don Hazen.

The example of the freedom riders in the civil rights movement.

What Is Non-Violent Direct Action And How Will It Make Us Win?
Scroll to top
PLANT-BASED FUTURE ACTIONS HAPPENING NOW!