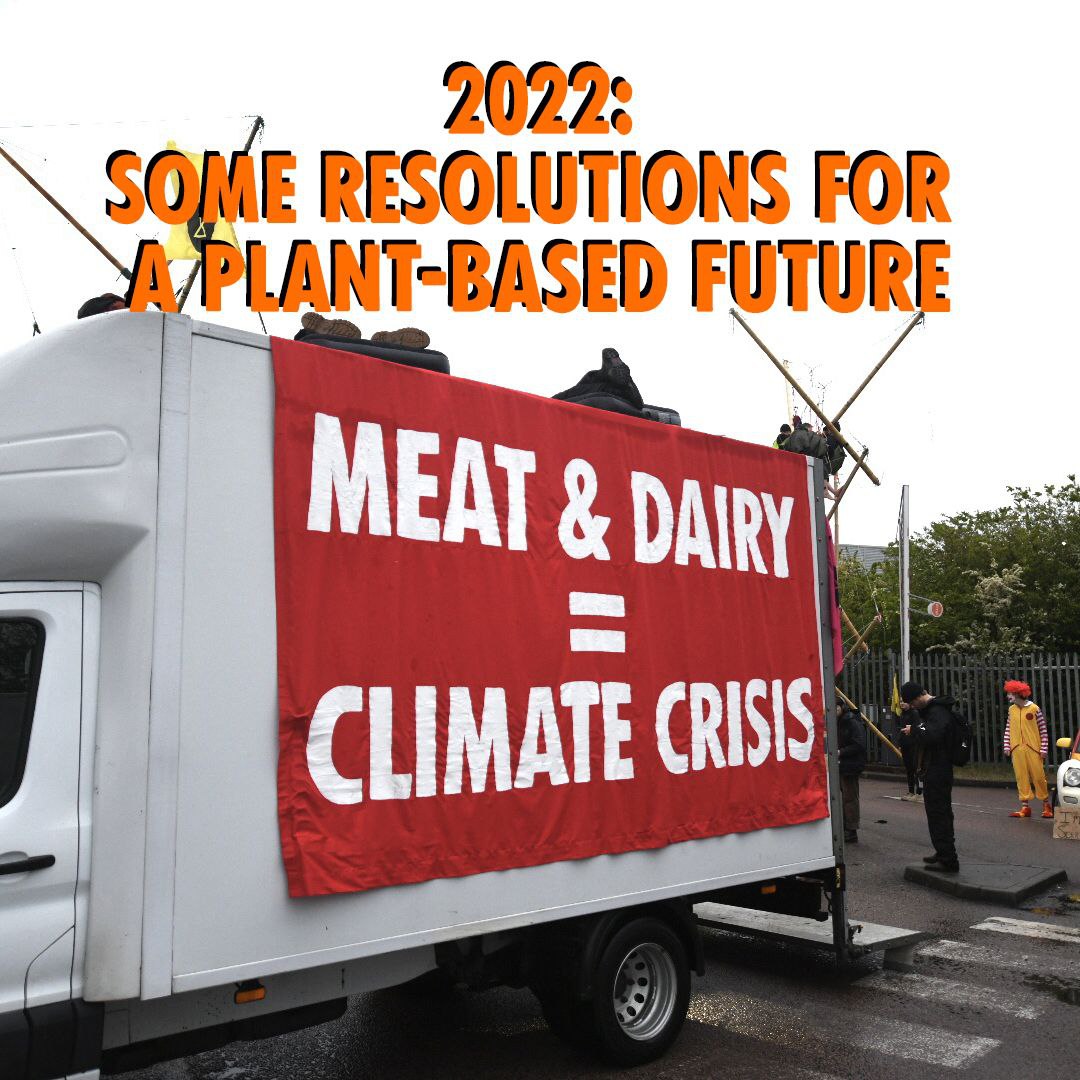 It’s that time where we all think about what we want to do and be in the coming year. With that in mind, here are some various resolutions for a plant-based future …

Well 2021 was a wild year, with blockades, beacons, and lock-ons aplenty! More can be read about those here or seen here. Animal Rebellion did a fantastic job in showing McDonalds, Arla (The UK’s biggest dairy producer,) and even the British government where they’re going wrong! With that in mind we wanted to invite the meat, dairy, and fishing industries to make some resolutions of their own to secure a just and sustainable plant-based future!

Let’s start it off nice and simple shall we? McDonald’s and Arla, this one’s for you (and other food and drink providers)! In fact it’s a resolution to make until 2025 and it is to  make a just and sustainable transition to 100% plant-based! Animal Rebellion is so excited to help in making  the change that we even used nonviolent direct action to speed you both along in 2021. In 2022 the resolution for the pair of you is to make genuine steps in that transition!

We know why these resolutions are necessary, but perhaps you don’t? Firstly Mcdonald’s, your current food system relies on meat directly linked to Amazon deforestation . Even when your beef burgers don’t come from South America, methane emissions from the cattle are catastrophic. It’s simple, serving 100% plant-based options in your restaurants is the only way to just and sustainable practice.  The McPlant might be a start, but it’s certainly not going to be the end …

Onto Arla, why is ditching dairy and transitioning to being 100% plant-based by 2025 such a great resolution? Well for starters, dairy can use up to 29x more land, 22x more water, and produces  nearly 5x as many greenhouse gas emissions per litre when compared to plant-based options. The fact is, the most ‘sustainable’ dairy option is less sustainable than the ‘least sustainable’ plant-based one. If that’s not bad enough, areas with intensive dairy farming also experience horrific levels of water pollution due to spillage, dumping waste feed, and the surface run-off of waste or excrement from the herds. It’s clear that dairy is milking the planet. McDonald’s and Arla’s  resolution to transition to just and  sustainable plant-based production is looking pretty good to us …

Now let’s think of a resolution for the fishing industry! Instead of destroying oceans and coasts alike, resolve to a just and sustainable transition away and into other industries like aquatic plant-based options.

Stopping fishing entirely is essential in order to preserve biodiversity and equilibrium in ocean ecosystems. In fact, depleting oceans of fish, and leaving rubbish behind is driving algal blooms, reduced carbon-capture potential, and poisoning coastal communities. We think this is more than enough reason to give multinational fishing corporations the resolution to transition away from their destructive practices, and support their workers in seeking a future within a just and sustainable plant-based food system.

Thirdly, we have a helpful resolution for the British Government! If our banner on the Home Office building didn’t make it clear enough in October 2021, invest in a plant-based future! We know that the, roughly, £1.5 Billion yearly subsidies for industries like meat, dairy, and fish would be better used elsewhere! The British government must help its farmers make the just and sustainable transition to plant-based farming in order to secure the future.

By helping ordinary farmers adopt Earth-friendly farming that they can rely on, the British government will be freeing up some 85% of land from inefficient meat and dairy production. Freeing this land for multiple uses including rewilding, plant-based farming, and renewable energy is a necessity to mitigate the worst impacts of climate breakdown.

Finally, not to just make resolutions for everyone else, Animal Rebellion would like to make a resolution for ourselves! That is to refuse to quit in our mission to secure a just and sustainable plant-based food system, thereby halting mass extinction, alleviating the worst effects of climate breakdown and ensuring justice for animals. Whether it’s on social media, from a beacon or helping university students campaign, we promise we’ll be there fighting for the future of all life!

If you’d like to get involved in helping any of these resolutions come true then fill out our interest form below or get in touch via any social media! There is something for anyone to do within Animal Rebellion!