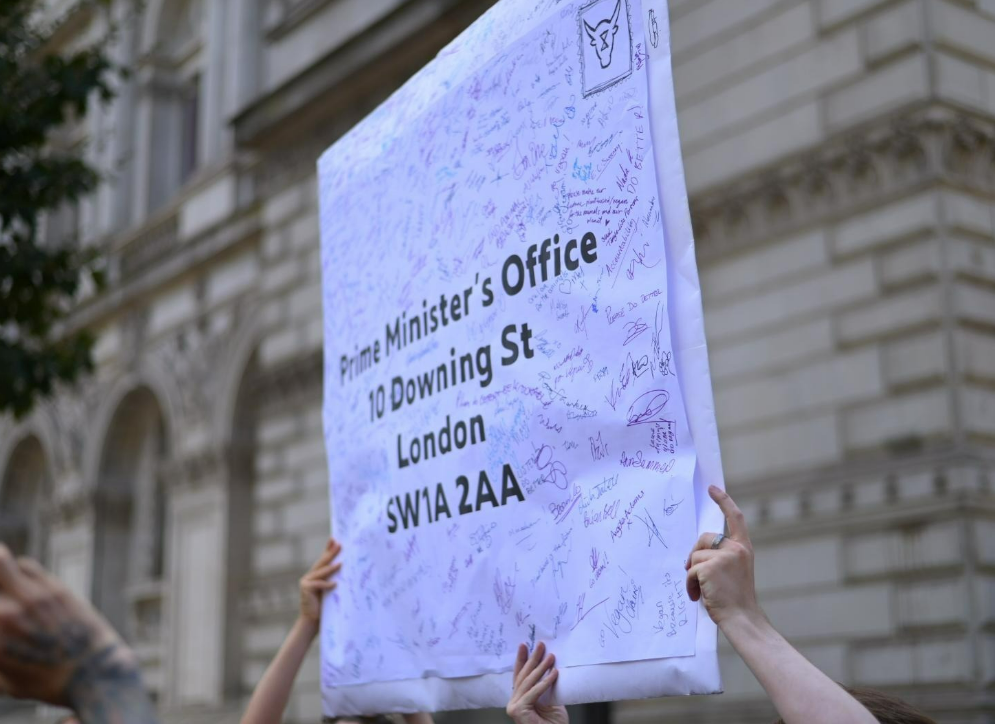 The full letter text can be found below:

“As a co-founder of Animal Rebellion – a mass movement using nonviolent civil disobedience to call for a just, sustainable plant-based food system – I am writing to urge you to step forward in support of our demands during our September campaign.

During the first two weeks of September 2022, Animal Rebellion will bring dairy supply to a stand-still with the participation of 500 people across the country. This will result in milk shortage in supermarkets nationally, becoming a massive media spectacle to occupy front-page news day after day.

In May, we issued a statement with two demands for Prime Minister Boris Johnson and Secretary of State for Environment, Food and Rural Affairs, George Eustice:

For the past three years, we have been reaching out to the Government so we can stop the disruptions and begin negotiations. To date, this invitation has not been responded to.

We act out of sheer necessity. Hard-working farmers who feed this nation are trapped in a dying, and environmentally disastrous food production system. The cost of not supporting this transition is unmeasurable.

I am certain we share the same understanding of the science that alarmed the world with a “code red” for humanity and said we are at our “endgame”. But there is plenty of evidence that an urgent transition to plant-based food systems and mass rewilding could still give us hope.

Joseph Poore, Oxford Academic, and co-author of the most comprehensive academic analysis of food production in history concluded that a global switch to plant-based food production would give incomparable positive changes to greenhouse gases, global acidification, eutrophication, and water use. Whilst also using a staggering 76% less land to produce the same amount of food.

A 2019 Harvard University report on UK farmland and food production from Helen Harwatt and Matthew N. Hayek strongly recommends a complete shift to plant-based production. The benefits of this are twofold: a reduction of the emissions produced and land used from animal farming and fishing, whilst also rewilding the freed-up land to absorb greenhouse gases from the atmosphere. This would result in net negative emissions from food production.

These are just two examples from the many studies and published papers that show the massive improvements we could all benefit from by transitioning to a plant-based food system.

I am one to believe that individual people at DEFRA do their absolute best to deal with this emergency. Yet, it is plain to see for the general public that DEFRA`s responsibility for improving and protecting the environment is hindered by the broken economic, political, and cultural systems that preserve a devastating status quo. Social science is clear: such systemic revolution can only happen through non-violent mass resistance.

I turn to you at this dire time, asking that in case the silence from Prime Minister Boris Johnson, his successor (Liz Truss or Rishi Sunak,), and Secretary of State for Environment, Food and Rural Affairs, George Eustice continues until 31st August 2022, you will stand with the people, and back our demands during the September disruptions, even at your own, personal sacrifice.

“Power is of two kinds. One is obtained by the fear of punishment and the other by acts of love. Power based on love is a thousand times more effective and permanent than the one derived from fear of punishment.” – Mahatma Gandhi