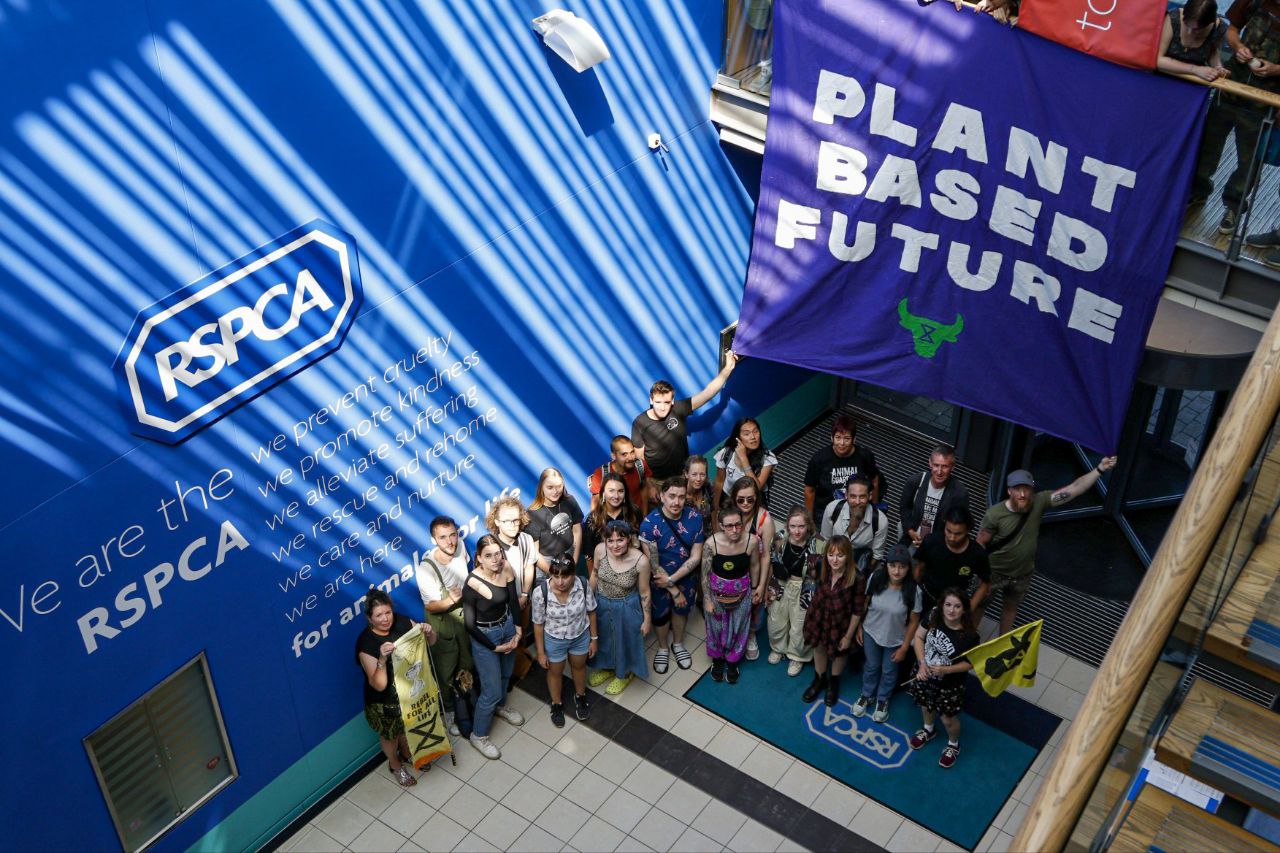 Today’s action marks an escalation in Animal Rebellion’s plant-based future campaign, as the group calls on the RSPCA to be part of a plant-based future. This comes after the group disrupted the Queen’s Platinum Jubilee weekend in June and poured out milk onto the floor of Harrod’s in July [1].

Jane, a former vice-chair of the National RSPCA and former board member of RSPCA Assured, said: “There are so many reasons for the RSPCA to lead the world in a move to a just plant-based food system. Its founders, 200 years ago, were brave and forward-thinking, standing up against injustice when others would not. It would be a fitting recognition of their legacy if the RSPCA now supported a plant-based future. We know that a plant-based future would prevent the unnecessary suffering of billions of animals whilst freeing up enough land to plant trees and draw-down carbon from the atmosphere.”

Alongside her is Martin Whybrow, a former RSPCA branch trustee. He added: “Already, millions of people and animals are suffering from the effects of extreme climate change. Last month’s record-breaking heatwave and wildfires in the UK were a stark warning for what is to come if we do not act now. A shift to a plant-based food system would help to enable us to meet the targets needed to limit global warming and ensure a livable future for all. It makes total sense for a charity dedicated to animal welfare to join the dots. For all the good work it does, there is a massive disconnect at present that means animals are suffering on farms and in the wild.”

This is the latest step in what is now an ongoing campaign targeting the RSPCA. A delegation from Animal Rebellion previously met with RSPCA senior managers on 4/5/22 [2] to convey their demands [3]. Animal Rebellion says the written response they received from the RSPCA following the meeting lacked any urgency, substance or commitment to change, triggering today’s occupation.

Animal Rebellion says they plan to heavily disrupt the supply of dairy to UK supermarkets “day after day” this September as they continue calls for the Government to support farmers in a transition to a plant-based future [4].