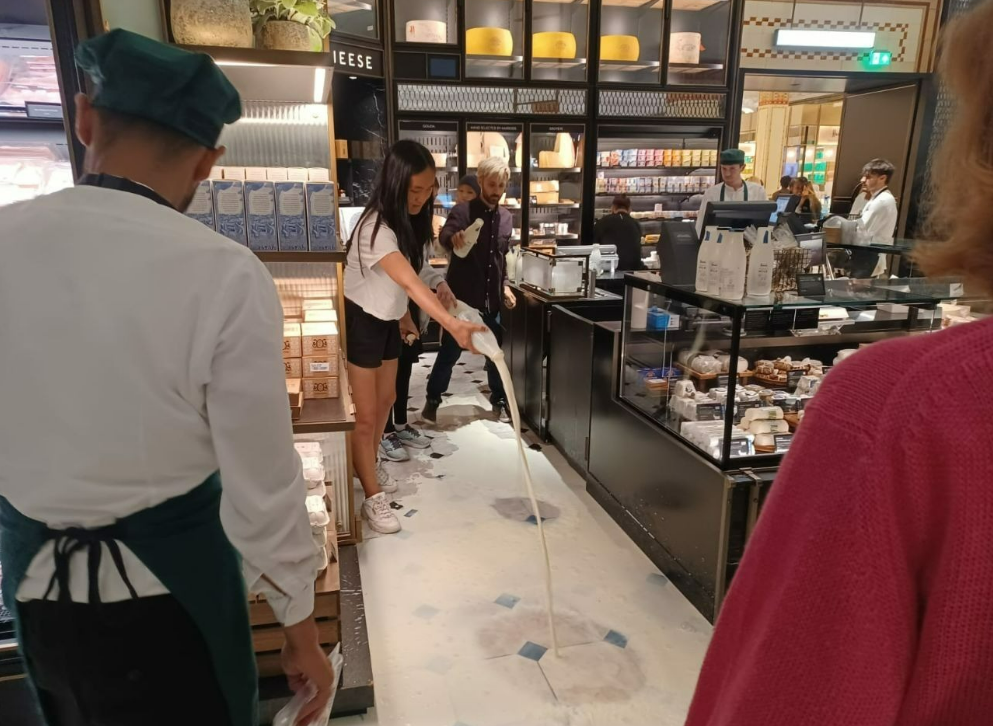 In an escalation of the Plant-Based Future campaign [1], supporters of Animal Rebellion blockaded supermarket dairy aisles and emptied milk bottles onto the floor.

Kat Chan, 20, who was amongst those in Harrods, said

“We are taking this necessary action because we don’t feel we have any other choice. Last week’s heatwave and wildfires showed us a glimpse of our future if we fail to act now.

Transitioning to a plant-based food system and rewilding is the key solution to the climate crisis.

There is no need for the deaths of over a billion animals for food each year in this country. We have the opportunity to lead the way on a safer future built on love, justice, and freedom.

A plant-based food system would provide security and a future to farmers and farming communities across the country, in contrast to the soaring rates of depression and financial ruin currently being experienced. Around 25% of dairy farmers are considering leaving the industry and we need the government to support them in the transition to plant-based farming.” [2][3]

Animal Rebellion is pushing for a straightforward and cast-iron solution to the climate and animal emergencies: transition to plant-based farming and rewilding of the freed-up land. Research from The University of Oxford has shown 76% of land currently used for farming would be freed up by wholesale transition to plant-based production [4]. This land could undergo rewilding and begin the crucial process of carbon drawdown; this drawdown has the potential to offset decades of fossil fuel emissions.

Nathan McGovern, 23, spokesperson for Animal Rebellion (who was notably involved in several Just Stop Oil disruptions in April that included interrupting an on-air interview on LBC and disabling petrol pumps at the Clacket Lane services on the M25) has said

“A golden solution to the climate and animal emergencies is being presented to us in the form of a plant-based future.

Imagine a world in which there is food security, safety, and hope for everyone, where we are not facing the horrors of climate breakdown currently being seen in places like Madagascar, Pakistan, or even 40 degree heat in the UK!

All we need is for the Secretary of State for Environment, Food and Rural Affairs, George Eustice and the rest of the government to take action that shows they care about the people they claim to represent.

This September hundreds of people will be taking action against the dairy industry to fight for a plant-based future that will ensure prosperity for humans, other animals, and the planet alike.”

[1] https://animalrebellion.org/plantbasedfuturelaunch/ The Plant-Based Future campaign is an upcoming civil resistance campaign with 2 demands for the British government: 1. Government supports farmers and fishing communities to move away from animal farming and fishing as part of an urgent and immediate transition to a plant-based food system. And 2. Government commits to rewild the freed-up land and ocean as part of a broader programme of wildlife restoration and carbon drawdown. [2] ”Rapid global phaseout of animal agriculture has the potential to stabilize greenhouse gas levels for 30 years and offset 68 percent of CO2 emissions this century” https://journals.plos.org/climate/article?id=10.1371/journal.pclm.0000010 [3] https://www.fginsight.com/news/news/nearly-a-quarter-of-dairy-farmers-planning-to-quit-128874  [4] “Reducing food’s environmental impacts through producers and consumers” https://www.science.org/doi/10.1126/science.aaq0216  [5] https://www.youtube.com/watch?v=qOq2Jqqga9E&t=5s
ANIMAL REBELLION POUR MILK ON FLOOR OF HARRODS AS PART OF PLANT-BASED FUTURE CAMPAIGN