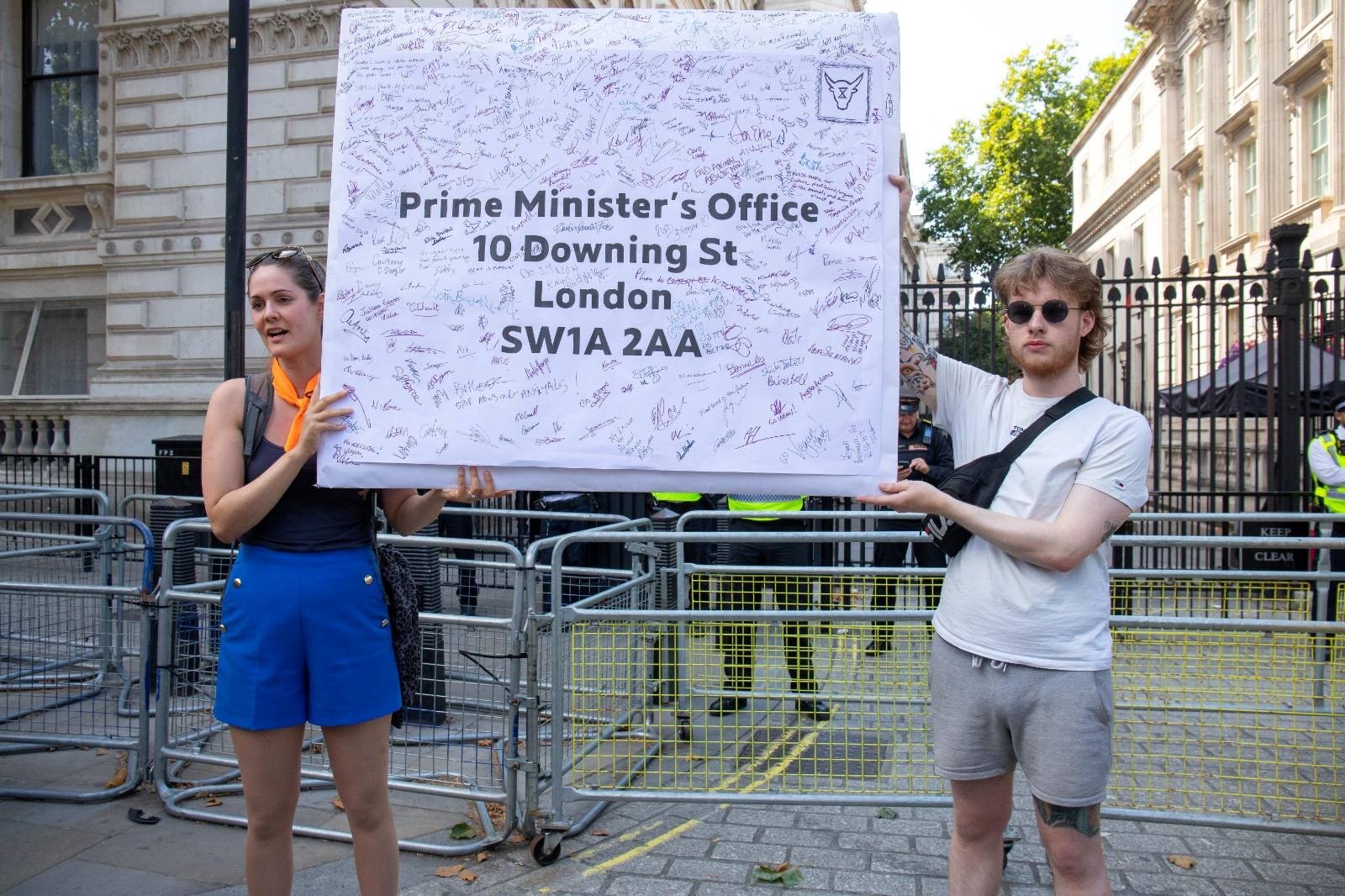 During the annual National Animal Rights March, which was attended by around 500 people, supporters of Animal Rebellion successfully handed over a letter addressed to Prime Minister Boris Johnson at Downing Street.

The group is demanding support for farmers and fishing communities in a transition to a plant-based food system, whilst also rewilding the land that is freed up as part of a wider scheme of carbon drawdown and nature restoration.

Nathan McGovern, 23, one of those who delivered the letter has said “We hope that Boris Johnson uses his last few weeks as Prime Minister to begin the necessary and urgent transition to a plant-based food system. The benefits of this transition are incredible and everyone wins. We hope that our government implements them as soon as possible, otherwise hundreds will be forced into action against the dairy industry to ensure they are”

The full text of the letter follows:

You have been Prime Minister for nearly three years, with your tenure as leader of The United Kingdom shortly coming to an end. During this time Animal Rebellion has consistently and non-violently disrupted industries that play a devastating role in the climate and ecological crises. All this time you have chosen to ignore our words, actions, pain, and sacrifice. All whilst billions of lives were extinguished worldwide.

You have the opportunity to work towards addressing these wrongs and displaying the compassion an elected official should have for the people they represent. In May, Animal Rebellion issued a statement with two demands for yourself and your Secretary of State for Environment, Food and Rural Affairs, George Eustice:

Joseph Poore, Oxford Academic, and co-author of the most comprehensive academic analysis of food production in history concluded that a global switch to plant-based food production would give incomparable positive changes to greenhouse gases, global acidification, eutrophication, and water use. Whilst also using a staggering 76% less land to produce the same amount of food.

A 2019 Harvard University report on UK farmland and food production from Helen Harwatt and Matthew N. Hayek strongly recommends a complete shift to plant-based production. The benefits of this are twofold: a reduction of the emissions produced and land used from animal farming and fishing, whilst also rewilding the freed-up land to absorb greenhouse gases from the atmosphere. This would result in net negative emissions from food production.

At Animal Rebellion, for the past three years, we have been reaching out to you so we could stop the disruptions and begin negotiations. Only when honouring the innate worth and value of every single person, can any government lovingly transform our economic, agricultural, healthcare, financial, and political systems to build a better world. These are choices not only for this country, but for the globe. You have the chance to lead the world into a plant-based future and we urge you to grasp it with both hands.

For one last time, before you leave the office, we ask you to accept our invitation for negotiations. We need emergency action on climate and we need strong leadership on this issue. If either you or George Eustice has not agreed to meet and enter negotiations for these demands by the end of August, hundreds of people all over the UK will be forced into taking nonviolent direct action to ensure that the necessary steps are taken to preserve their livable world.

Versions of this letter have been sent to both candidates to take up the mantle of Prime Minister: Rishi Sunak and Liz Truss. We hope that if you fail to act with love and compassion that they will.

We will await your response with love for human and nonhuman animals and the living planet.

Nathan McGovern and Dora Hargitai, on behalf of Animal Rebellion”