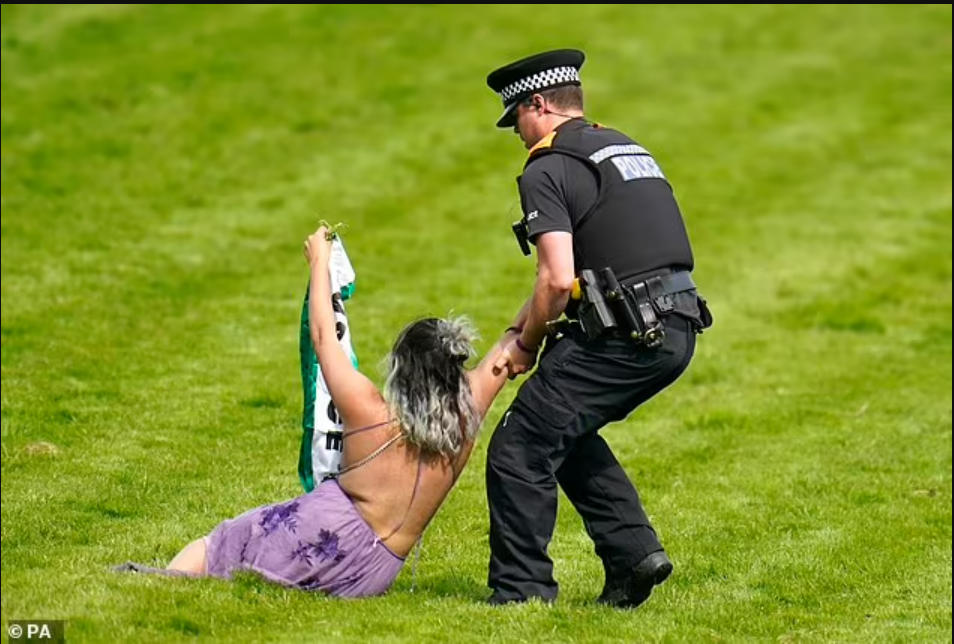 Protestors from Animal Rebellion stormed the Epsom Derby to disrupt the race and urge for an end to animal abuse and, instead, a transition to a fair and compassionate plant-based future. This comes just 2 days after the group disrupted the Platinum Jubilee in an effort for Royal land to move to plant-based production and rewilding. [1]

Orla Coghlan, one of those at Epsom today, said “Horse racing took the lives of 220 animals on racecourses in the UK last year, and this is just the tip of the iceberg. In this country over a billion land animals are killed for food each year. Exploitation of, and violence against, animals is fuelling the climate emergency and suffering across the globe. It is obvious we must choose life over death and stop animal exploitation.” [2] [3]

Today’s disruption is a definitive statement, and act, against the cruelty and harm the horse-racing industry represents. Riding horses damages their skeleton, spinal nerves and skin. Whilst horses used in races commonly suffer from heart failure, bleeding lungs and gastric ulcers. Most people recognise the cruelty of bullfighting in Spain [4] and, therefore, should also stand against other forms of animal exploitation.

Currently in The UK around 1.9 million dairy cows [5] are in a constant cycle of artificial insemination, pregnancy, birth, their baby calves being taken and killed, and being repeatedly milked beyond their natural capacity due to selective breeding and artificial hormones. All this whilst industries like meat, fish, and dairy directly contribute to climate breakdown and loss of nature [6].

Emma De Saram, spokesperson for Animal Rebellion, said “Whether it’s horse racing, dairy, or the meat industry, animal exploitation has no part in our world. By moving beyond this and into a plant-based future we can ensure happiness and justice for all life. Transition into a plant-based future would offset 68% of carbon emissions this century, whilst also putting an end to the horrendous suffering animals face right now.” [7]

Moving to a plant-based food system would free valuable land that could, instead, be rewilded. This would bring forests, woodlands, nature, and life back to land across the UK. Rewilding has the potential to absorb massive amounts of carbon from the Earth’s atmosphere and form a key solution to the climate and ecological emergency. [8]

The action today comes as part of Animal Rebellion’s demands for a plant-based future, which were announced on Monday 23rd of May. [8] The group is urging for wholesale governmental support for a transition to a plant-based food system and programme of rewilding that will secure a future for generations to come.