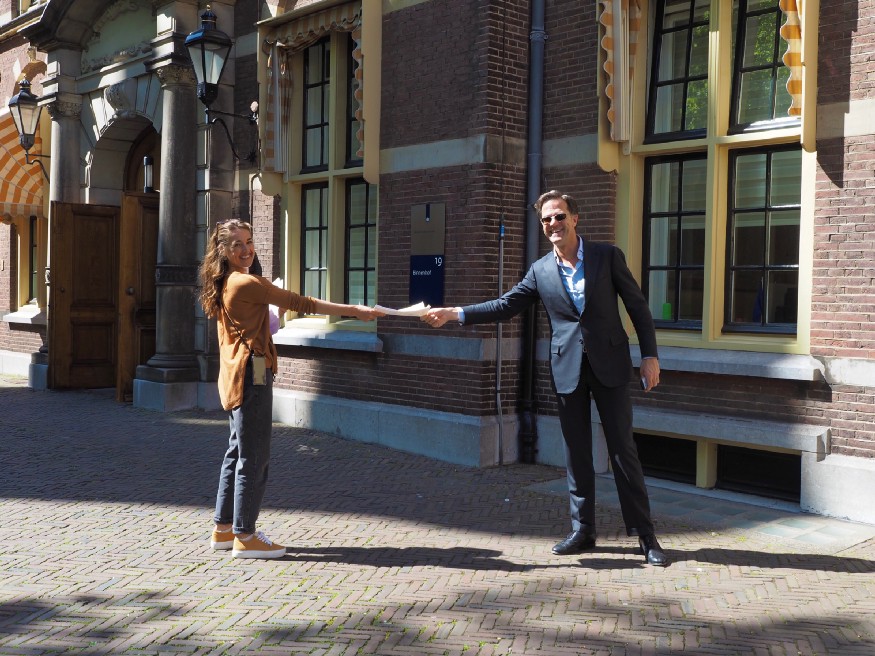 Emerging from our Cargill action we knew that, for Earth Day, we again wanted to combine a small but strong in-person action, with a broader initiative that the general public could participate in, whilst adhering to the COVID-19 regulations. Our broader action was a country-wide call-out for people to tie signs, designed by artists at Extinction Rebellion, to trees on their daily walk. Meanwhile, a small group of us composed a carefully worded letter and planned its strategic delivery to the Prime Minister, accompanied by a “Sarah doll”. The life sized doll symbolises a woman turning the age of 50 in the Netherlands, which felt apt as it was the 50th anniversary of Earth Day.

Animal Rebellion action circle members put forward many creative ideas in line with Earth Day’s climate theme. We needed to demand that the government listen to the science and act on climate change. The open letter was written to all parties, and delivered both through the media, and in person, at the houses of parliament in the Hague.

On the day of the action, we set up camp next to a narrow walk-way where members of parliament were known to pass by on their break. Of course we could not be certain that we would be able to waylay the Prime Minister himself that day, but we hoped to be able to give our letter in person to as many politicians as we could and post it in surrounding government buildings.

Six of us were present in the Hague, split into groups of two or three. Our presence eventually attracted police as well as the gendarmerie, and we were ID’d and asked to leave. We grabbed this opportunity to inform and educate the officers about the climate crisis. Many said they knew nothing about it, and read our letter with interest.

Before we left, however, in a stroke of much hoped-for sheer luck, the Prime Minister suddenly walked by our theatrical set-up, taking notice of the “Sarah doll”, and we were able to engage him in conversation as to why we were there, as well as hand him our letter!

We urge you to write to your local MP and Prime Minister.

Read our letter here in Dutch or English.