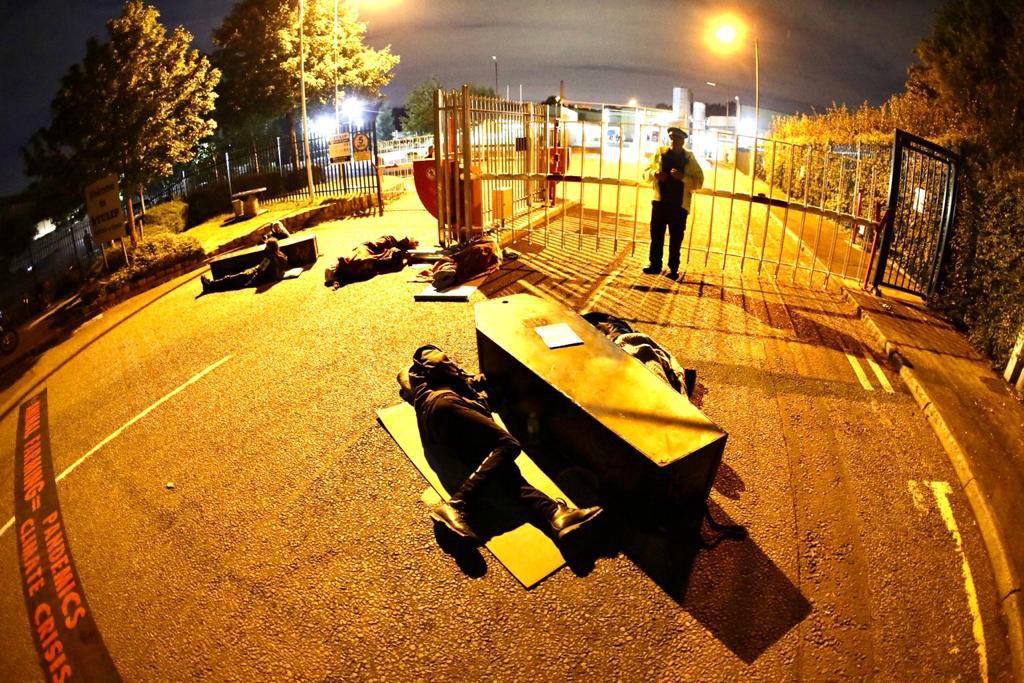 Animal farming is both a health risk and climate risk.

In February, SMASH Speciesism locked themselves to concrete and blocked the entrance of Tulip Slaughterhouse, an abattoir in Manchester. The factory was brought to a standstill for 10 hours. SMASH Speciesism urged the factory to transition to a plant-based food production site instead of contributing to the 3000+ pigs they gas and stab each day.

SMASH Speciesism is an anti-speciesist, non-violent, direct action group. Eleven members were to be held on trial today (7th September), but the trial was postponed. Today, Animal Rebellion also blockaded the same slaughterhouse, now under the ownership of Pilgrim’s Pride, to stand in solidarity with SMASH Speciesism. They demanded that all slaughterhouse trucks arriving to the site were cancelled for the day. The action highlighted the criminality of gassing pigs, the health risks posed to slaughterhouse workers and, the climate crisis.

“Speciesism” is the human-held belief that all other animal species are inferior. Speciesist thinking involves considering animals — who have their own desires, needs and complex lives — as a means of human enjoyment, consumption and personal gain.

Outside Parliament, Rebels, with red-dyed hands, held up a 30-metres banner reading “UNFUCK THE WORLD — PLANT-BASED FOOD SYSTEM”. They were also demanding justice for all non-human animals, the slaughterhouse workers, the climate, and the activists who stand up against these unjust systems.

Over 3000 pigs are gassed alive in chambers and cut from their neck at Tulip Slaughterhouse every day. 72 billion land animals and more than 1.2 trillion aquatic animals are killed for food every year in our agricultural system. Each can feel physical and emotional pain.

As Corona virus impacted worker numbers, millions of animals have been culled in the past few months. Culling can take place in two forms: “the first involves filling the sheds where chickens live with CO2. The second involves putting the birds in specialised containers filled with CO2 and other gasses”. Both suffocate them.

75% of global agricultural land is used for animal agriculture. To produce the same amount of energy, animal agriculture requires more land than plant-based foods. Reconsidering our eating habits is a powerful decision. It enables us to move away from polluted air, poisoned waterways, loss of biodiversity and the destruction of wildlife.

Creating a just and sustainable plant-based food system is pivotal for planet health.

“We are shutting this slaughterhouse down because we see no lawful activity being done here. It is contributing to the gassing of pigs, the destruction of our climate and the spread of deadly diseases between workers.”

Recent studies have shown that 75% of new and emerging infectious diseases come from animals. In the UK, there have been several outbreaks of coronavirus in meat production sites and slaughterhouses. These are hotspots for the virus to thrive and the cases have been in their hundreds! Vulnerable workers are being put at large risk by the continued operation of these plants.

Factories are cold and damp — the ideal atmosphere for the virus to thrive. Workers are between 30 to 40 cm away from each other as they are working on mass scale. Between lines there is little space to keep their distance too.

Other outbreaks have been seen in:

At least 350 individuals are isolating due to these cases.

300,000 chickens will be gassed alive in order to cull them. Without the staff, the slaughterhouse cannot “process” the sheer number of chickens.

2 Sisters is one of the largest food producers in the UK, processing about 1.3 of all poultry eaten in Britain each day. It supplies major food outlets and supermarkets: ASDA, Co-op, KFC, Lidl, M&S, Morrisons, Sainsbury’s Tesco, and more.

On April 3rd, workers staged a walkout from the factory in protest to unsafe working conditions.

Earlier, a worker told 5 Live Investigations he does not feel safe at work as there are three or four lines of 10 people each in a metre-and-a-half of each other. There is 35–40cm between each person on the line.