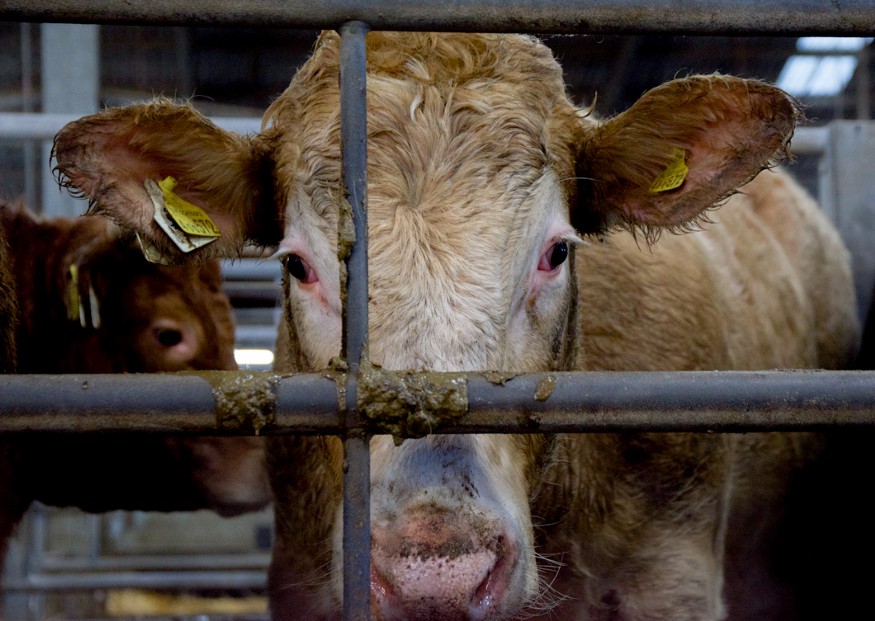 As Animal Rebellion march on Westminster, let’s look at the toll animal agriculture takes on humanity.

Did you or anyone you know live in the UK between 1980 and 1996? If so, did you also know that you cannot legally donate blood anywhere in the world except in Britain? And that the reason is down to animal agriculture?

Most people are aware of variant CJD and its link to BSE in cattle due to the scandal of ‘Mad Cow Disease’ in the 1990s. But how many are aware that in December 2012, the medical journal ‘The Lancet’ reported that 1 in every 2000 people alive today may be incubating the disease due to eating infected meat or exposure through blood donations or foodstuffs containing bovine material? The initial wave of victims had a specific genetic profile which meant that the disease manifested sooner, but scientists now know that people can carry the disease for up to fifty years without showing symptoms. When the disease emerges it is gruesome, painful and always fatal. And scientists say they simply do not know how many people could be impacted: no test for carriers of the disease exists.

This catastrophe was entirely man-made and arguably due to caused by the commodification of animals and the greed for profit. Many farmers in the 1980s started feeding their cattle meat and bone meal made from the rendered down remains of sheep, pigs and cattle, effectively turning cows into cannibals. The protein in the bone meal sped up growth and reduced costs, allowing more money to be made. Meanwhile, mechanically recovered meat (mulch made from the remains of animal corpses including spinal cords, brains and eyes) was being processed and sold in pies, burgers, sausages and other foodstuffs.

‘Murdered by greed and corruption’ is the epitaph on Grant Goodwin’s grave. Grant ‘died in agony’ aged only 30 after succumbing to the human form of BSE, known as variant Creutzfeldt-Jakob disease (vCJD)’. His father, a taxi driver, believes that the risk to human health from eating British beef was known as far back as 1988 and claims his family were family was told to keep secret the fact that Grant had vCJD to prevent a public outcry. Christine Lord, whose son Andrew also died from the same horrific disease, found documents and memos dating from 1986 showing BSE could pass from cattle to humans through infected meat and that, if it did, it would kill. However, the government continued to assure the public that British beef was safe to eat until March 1996 when the link between eating beef and BSE was finally confirmed.

Grant’s tragic story was featured alongside other victims in the BBC’s ‘Mad Cow Disease: The Great British Beef Scandal’, aired in July this year. The episode is ‘currently unavailable’ on iPlayer, oddly, but plenty of articles have been written about it and the continued threat to human health even today. As Carol Midgley reported in the Times, “Who could watch Mad Cow Disease: The Great British Beef Scandal without feeling a) deep disgust and b) rage? Rage at the rampant, reckless greed of the meat industry, rage at the arrogant assurances of the Conservative government that there was no risk to health as it prioritised beef farmers’ interests, rage at the grotesque hubris of feeding the remains of cows, sheep, pigs and chickens back to cattle, making cannibals of herbivore animals. What a perversion”.

In October 1992, John Gummer, then the Secretary of State for Agriculture, was called before the Agriculture Select Committee and, reading from reports by environmental health officers said, “We have real problems with our slaughter houses”. He then read extracts from government reports revealing what had been documented: “Slaughter hall floor heavily soiled with blood, gut contents and other debris — no attempt to clean up between carcasses. Car cleaning brush heavily contaminated with blood and fat being used to wash carcasses. Offal rack and carcass rails encrusted with dirt. Missing windows — birds, flies and vermin entering. Effluent discharging across floor — risk of contamination. Faeces was often found smeared over the dead bodies of the cows.”

Has anything really changed? A freedom of information report released by the government’s food watchdog in 2016 revealed that ‘there were more than 4,000 severe breaches of animal welfare regulations over the past two years at British slaughterhouses’. Horrific reports reveal cruelty, neglect and malpractice (which increase the risk of food poisoning).

Four million cows and around two hundred people so far have died due to BSE in Britain alone (the disease has also emerged in other countries), and it has cost the NHS over a billion pounds. Scientists do not know how many people are carrying the disease, nor how many more will die. A letter written to Dr William Watson, director of the Central Veterinary Lab, which was part of the Ministry of Agriculture warned in 1986 that, ‘’If the disease turned out to be bovine scrapie it would have severe repercussions to the export trade and possibly also for humans if for example it was discovered that humans with spongiform encephalopathies had close association with cattle. It is for these reasons that I have classified this document confidential.’ According to the Philips Report into the outbreak, the truth was ‘carefully’ hidden from the public – to protect animal agriculture at the expense of lives.

As great a threat as climate change

The bad news continues. The IPCC warned last year that climate change would lead to disaster within 12 years if urgent action was not taken to reverse the growth in greenhouse gas emissions. According to the World Wildlife Fund, ‘Humans and wild animals face new challenges for survival because of climate change. More frequent and intense drought, storms, heat waves, rising sea levels, melting glaciers and warming oceans can directly harm animals, destroy the places they live, and wreak havoc on people’s livelihoods and communities’. The IPCC report warned of increased ‘heat-related mortality and morbidity, decreased cold-related mortality in temperate countries, greater frequency of infectious disease epidemics following floods and storms, and substantial health effects following population displacement from sea level rise and increased storm activity’. Animal agriculture is a significant factor in this threat to health.

However, another threat looms and again animal agriculture bears responsibility. Not salmonella, nor pollution, nor people in impoverished areas starving as food they could eat is fed to farm animals, nor high cholesterol or cancer, although all those and more also have connections to animal agriculture. This threat has been called an ‘apocalyptic’ threat which could mean the ‘end of modern medicine’ by England’s chief medical officer, Dame Sally Davies. She said in April that, ‘The threat of antibiotic resistance is as great as that from climate change, and should be given as much attention from politicians and the public.’

Since the discovery of penicillin in 1928, antibiotics revolutionised medicine and penicillin alone is estimated to have saved between 80–200 million lives and is still doing so. Globally today though, by far the greatest use of antibiotics is animal agriculture. The systematic overuse of antibiotics is undermining their ability to cure life-threatening infections in people by creating antibiotic resistant bacteria. Experts predict that 10 million people a year could die from antibiotic resistant infections by 2050.

Shockingly, antibiotics are also used for ‘growth promotion’ of animals, forcing them to put on weight faster and thus increase profits. This practice is banned in Europe and the USA but is common elsewhere. The use of strong antibiotics critical to human health is still allowed on farm animals despite scientific advice to the contrary, including in the UK and USA. Fish farming is also implicated in this threat to human health: according to a report published in June by Farm Animal Investment Risk and Return (Fairr), ‘The climate crisis, excessive use of antibiotics and feeding farmed fish with wild stocks risks “sinking” the aquaculture industry’. It’s the common problem -prioritising profit over animal welfare and food safety that is to blame, as Dutch MEP Anja Hazekamp complained after the European Commission failed to legislate after ‘horrific’ methods of slaughter were revealed on Italian fish farms in 2017/18. She said, “Animal welfare is not a priority of this commission, especially where fish are concerned. Commercial interests are always given higher priority, unfortunately.”

The UN’s Interagency Coordination Group on Antimicrobial Resistance (IACG) has recommended stronger rules should be enforced internationally to prevent the overuse of antibiotics in farming and on people.

Haileyesus Getahun, the director of the IACG, said the threat of antimicrobial resistance was “a silent tsunami”, and that the public were still largely unaware of the problem. “We don’t see the effects of it yet, but what is coming will be a catastrophe.”

Dame Sally Davies echoes this concern: “The world is facing an antibiotic apocalypse. Unless action is taken to halt the practices that have allowed antimicrobial resistance to spread and ways are found to develop new types of antibiotics, we could return to the days when routine operations, simple wounds or straightforward infections could pose real threats to life”.

Animal Rebellion believes that the issues of climate change and animal agriculture need to be tackled from the top down. Commodifying sentient beings for greed, profit and convenience does not impact only farmed and wild animals but threatens our own existence on this planet. Are governments which seek to protect animal agriculture’s profits over health the ones you trust with regards to food safety? It’s not too late for change: complete system change and a transition to a clean, plant based system would benefit the earth and all its inhabitants.

It’s time to demand an end to animal agriculture.

Join Animal Rebellion and be a part of history.

Because humans are animals too.

Because Humans Are Animals Too
Scroll to top
PLANT-BASED FUTURE ACTIONS HAPPENING NOW!