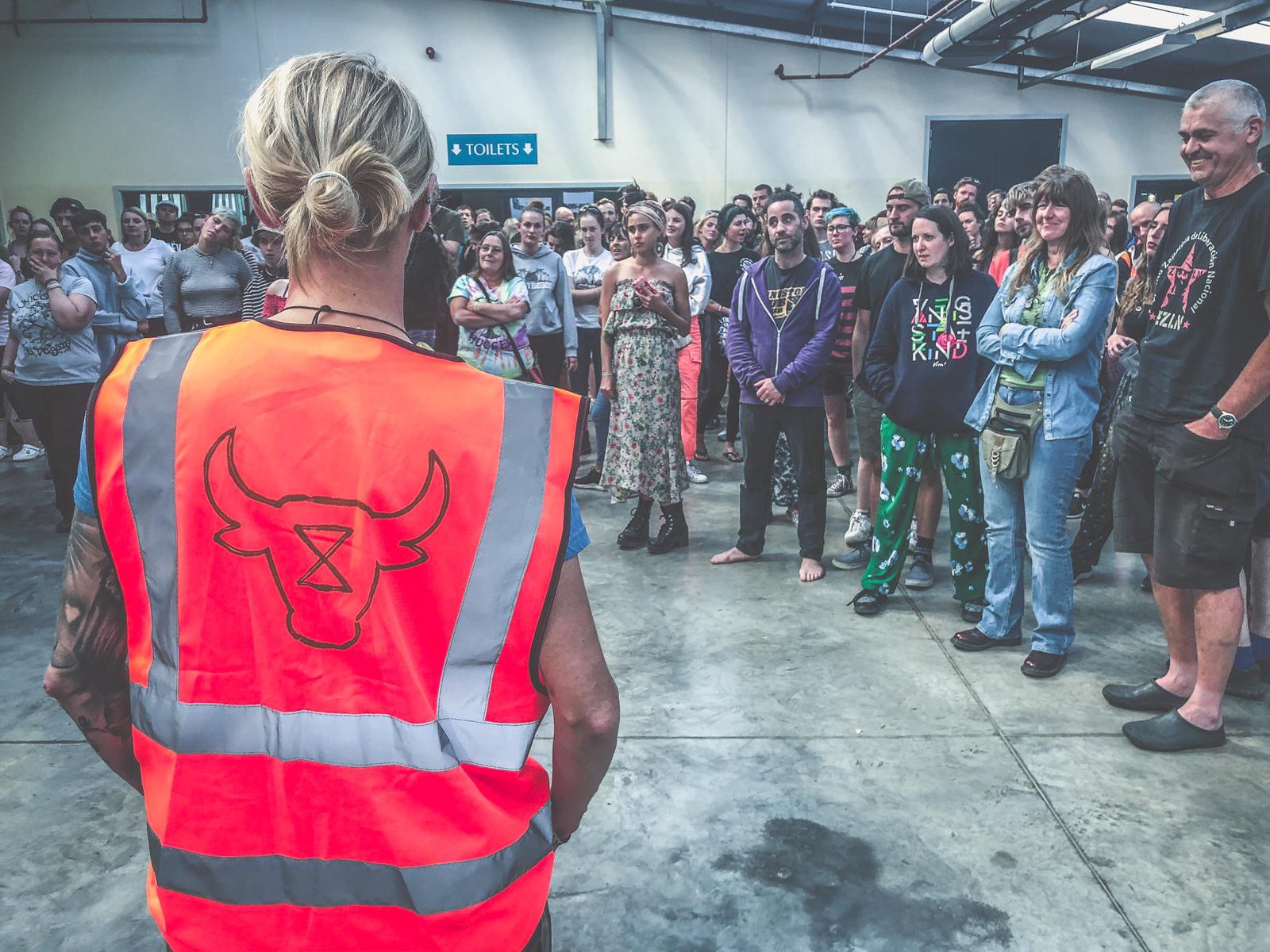 On the final, hot weekend of August, Animal Rebellion made a huge impact at the world’s largest vegan camping festival, the Vegan Campout 2019. At their colourful stall, sunflower-yellow flags flapped in the breeze, people queued for guerrilla t-shirt printing, and volunteers signed up en-masse to join the rebellion.

Here on Saturday morning, amongst nearly 7,000 campers from across the world, I kicked off a day of activism talks to a room packed with nearly 1,000 people who took time out from the food, music and sunshine to hear from a range of speakers about getting active for the animals.

Speaking on behalf of animal rights organisation Anonymous for the Voiceless (AV), I talked about the street conversations that have seen our volunteers across the world convincing over 250,000 people to seriously consider a vegan lifestyle.

Having been involved with AV for nearly two years, speaking to so many people at the festival about the impact of individual change was a thrill. Now that I’m also involved with Animal Rebellion, it was a thrill of equal magnitude to hand over to spokesperson Dora Hargitai for her speech. Encompassing Animal Rebellion, societal change and the need to come together and act now, this powerful, passionate advocate went on to deliver one of the best talks of the weekend.

After initially getting involved with Extinction Rebellion at the April disruption in London, Hargitai felt compelled to bring people together to force systemic change. Sensing the need to urgently place the vegan message at the forefront of this growing movement, she took action and headed straight for Roger Hallam, co-founder of Extinction Rebellion.

“I disrupted his birthday party at Regents Park, asking how Extinction Rebellion could join forces with the already active” animal justice movement. He connected me with Animal Think Tank, who had the research, strategy and planning to kick off this massive project. We formed Animal Rebellion, then met with Extinction Rebellion alongside twenty animal justice organisations to formulate a plan on collaboration, and the rest is history!”

Partnering with Surge Activism at the Animal Rights March in August, Animal Rebellion successfully blocked Trafalgar Square for 45 minutes with 12,000 people, bringing their upcoming October disruption at Smithfield Meat Market to the centre of attention for thousands of vegans. The next most significant event in the United Kingdom after the march was the Vegan Campout 2019, and as I wrapped up my talk and handed over to Hargitai, the excitement was palpable.

“Seeing the room filled up to the point where people had to stand at the back was a clear sign that there is a common awakening to the devastating reality that — despite all the efforts and sacrifices in the animal justice community — the possibility of protecting the Earth and all the beautiful individuals we want to bring justice to is slipping through our fingers. But, with growing fear and despair, there is also growing hope; the engagement in the room, the glow in the eyes, the courage of the people asking important questions were some of the most beautiful moments I have ever witnessed. I have immense love and respect for everyone who came to the talk with an open mind and heart, in humility and compassion.”

A phenomenal, gripping act of public engagement, Hargitai’s talk captivated everyone, including me. Already on-board, I nevertheless sat there with an ever-dropping jaw as the stark, haunting facts of what we all face were laid out.

Make no mistake, this is grim stuff. There was not a whisper as Hargitai revealed, at the heart of it all, the impact of animal agriculture and the urgent need to transition our entire planet as quickly as possible to a plant-based food system. The point made, the demand of the people in the room was laid out: do your part, join the October rebellion.

“Our social, political and economic system is fundamentally fucked, and if we do not change it rapidly, we will all be assisted to our death alongside everyone we love and care about,” says Hargitai. “This movement of movements will see people from different backgrounds uniting and living on the bare minimum in October on the streets of London, bringing a shared humility, seeking knowledge from each other, talking openly and with respect.”

Stirring stuff, the talk ended with a bang as hordes of campers were inspired to get active, sign up and join the rebellion. But where is all of this going? For Hargitai, the answer is clear.

“There will be a cultural shift in humanity before our economies change. A caring, humble, frugal, society will organically emerge as, together, we refuse to take part in ecocide. The rebellion for all lives will not stop until the climate breakdown is no longer a threat for us or for future generations.”

While I’ll continue advocating for individual change through work with animal advocacy organisations, delivering public speaking engagements wherever I’m needed, being there on the front lines for this talk from Animal Rebellion opened my eyes wider and made the fire in my belly burn even brighter than before.

See you at the rebellion.

“I’m in. Are you?” Leigh Venus’ Account of Animal Rebellion at Vegan Camp Out 2019
Scroll to top
PLANT-BASED FUTURE ACTIONS HAPPENING NOW!