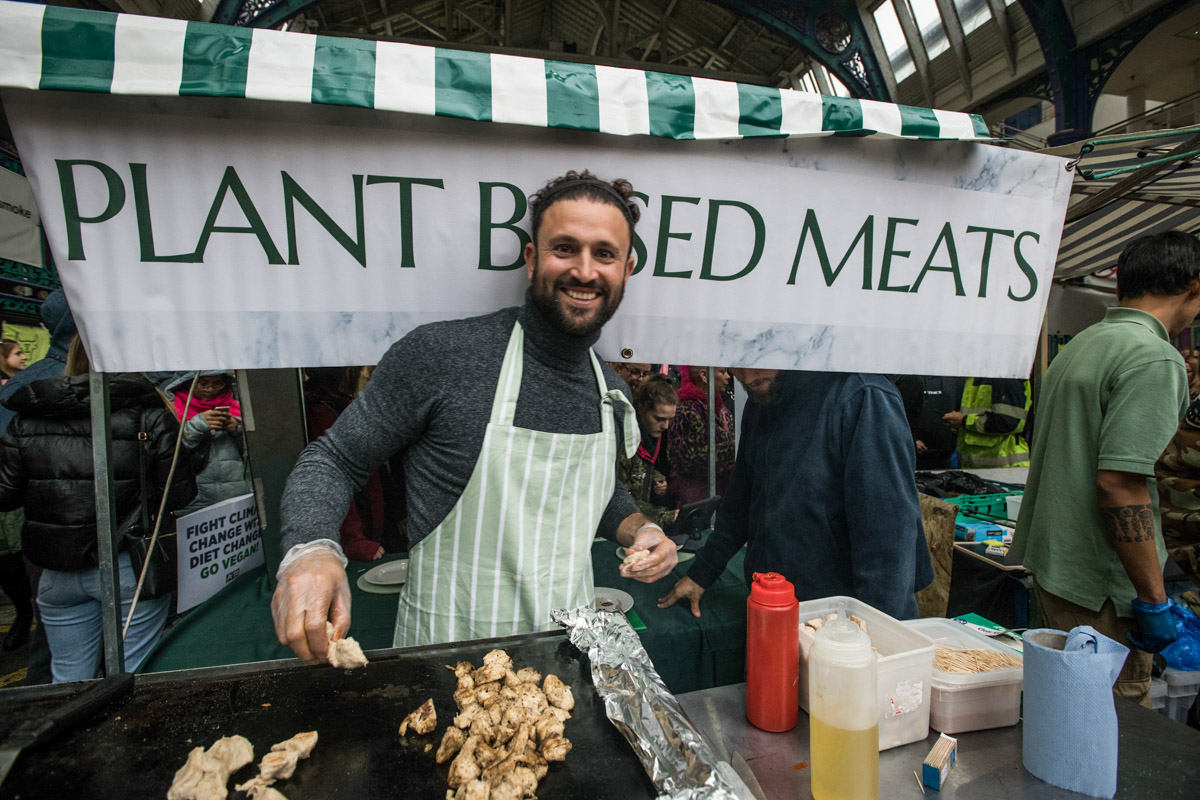 As part of Animal Rebellion’s response to DEFRA’s National Food Strategy, Animal Rebellion has made ten core suggestions. The first is to incentivise a just and sustainable plant-based business model. In their (invited) consultation with DEFRA, Animal Rebellion points out that vegans and vegetarians are expected to make up a quarter of the population by 2025. They note that in response to the increasing demand for ethical plant-based alternatives to meat, fish, dairy, and other animal products, plant-based businesses have been on the rise. The popularity of Beyond Meat products (such as the Beyond Burger, made from pea protein, coconut oil, potato starch, and beetroot juice) and other plant-based alternatives to animal products is a clear indication that the UK public is ready for a change. While a social shift towards more compassionate consumer choices is clearly underway, major transformation in this direction can only take place if DEFRA actively incentivises plant-based businesses on a mass scale. Effective government incentives to activate a systemic transition towards the production and sale of plant-based consumer goods could include VAT tax cuts, start up cash, and favourable loans.

Heather Mills’ vision to develop a “Plant-Based Valley” — or a production hub for plant-based alternatives to animal flesh and other animal products — in the north of England is an excellent example of the type of business the UK government should be investing in if it is truly committed to sustainability and combatting climate change. Since the late 1990s, Mills has been developing tasty alternatives to popular meat products such as doner kebabs. From a small operation in a tiny production facility in Corby, Northamptonshire, Mills went on to open VBites cafe in Hove, West Sussex, and is now aiming to open three large plant-food factories around Newcastle with a staff of 400. What is particularly attractive about Mills’ approach is that she aims to appeal directly meat-eaters, in addition to vegans. By demonstrating to the former that it is possible to enjoy the taste of a doner kebab without harming and killing animals to get the same result, Mills’ products can help facilitate the transition from exploitative animal-based agricultural production to compassionate plant-based agricultural production.

Government incentives will also enable businesses like Mills’ to provide high quality, ethically sourced plant-based products at an affordable price. One of the main barriers to the mainstreaming of plant-based products is their comparably high cost. Many people, particularly those who are economically disadvantaged, find the cost, of say organic oat milk versus cow milk — the production of which involves terrible physical and psychological suffering for mother cows and their calves — prohibitively high and therefore opt for the cheaper product, even if their conscience objects. People should not have to choose between their conscience and their pocketbook. Wholesome healthy food, which has been produced without violence to humans, animals, or the earth, should be and can be made readily available to the entire UK population. The only barrier is remaining tied to an outdated and ruinous food production system. Once that obsolete model is abandoned and replaced with a clean, green, animal-earth-human friendly model, plant-based foods will fill marketplaces and tummies across the nation, and we will be healthier, in spirit and body, for it.

Animal Rebellion’s second, and related, demand is to shift subsidies away from animal agriculture and towards protein crop cultivation. Between 2016–17, subsidies of £70 million were paid to resource intensive, pollution-heavy factory farms. If subsidies were redirected to plant-based agriculture, the terrible environmental impact of factory farming, not to mention the unspeakable injustice against animals that it entails, would be dramatically reduced and ultimately eliminated.

With increasing public awareness about the climate catastrophe and the major role animal agriculture is playing in it, and with growing public concern about the horrendous treatment of animals in the agricultural industry, the time is ripe for system change. We cannot go on needlessly killing sentient animals on a massive, unprecedented scale to satisfy our palates and fill our pockets. To do so would be, frankly, criminal on a world-historical scale. The UK government owes it to the future generations — those who stand to suffer most from the mistakes of the past — to commit in principle and practice to a more just, more ethical, and more sustainable future. One essential means of achieving this goal is to redirect funding from cruel and environmentally destructive animal-product enterprises to businesses for which the wellbeing of the earth, animals, and human beings are integral, not counter, to their success.

Incentivising Plant-Based Businesses: A Necessary Step Towards a Just and Sustainable Future

One thought on “Incentivising Plant-Based Businesses: A Necessary Step Towards a Just and Sustainable Future”