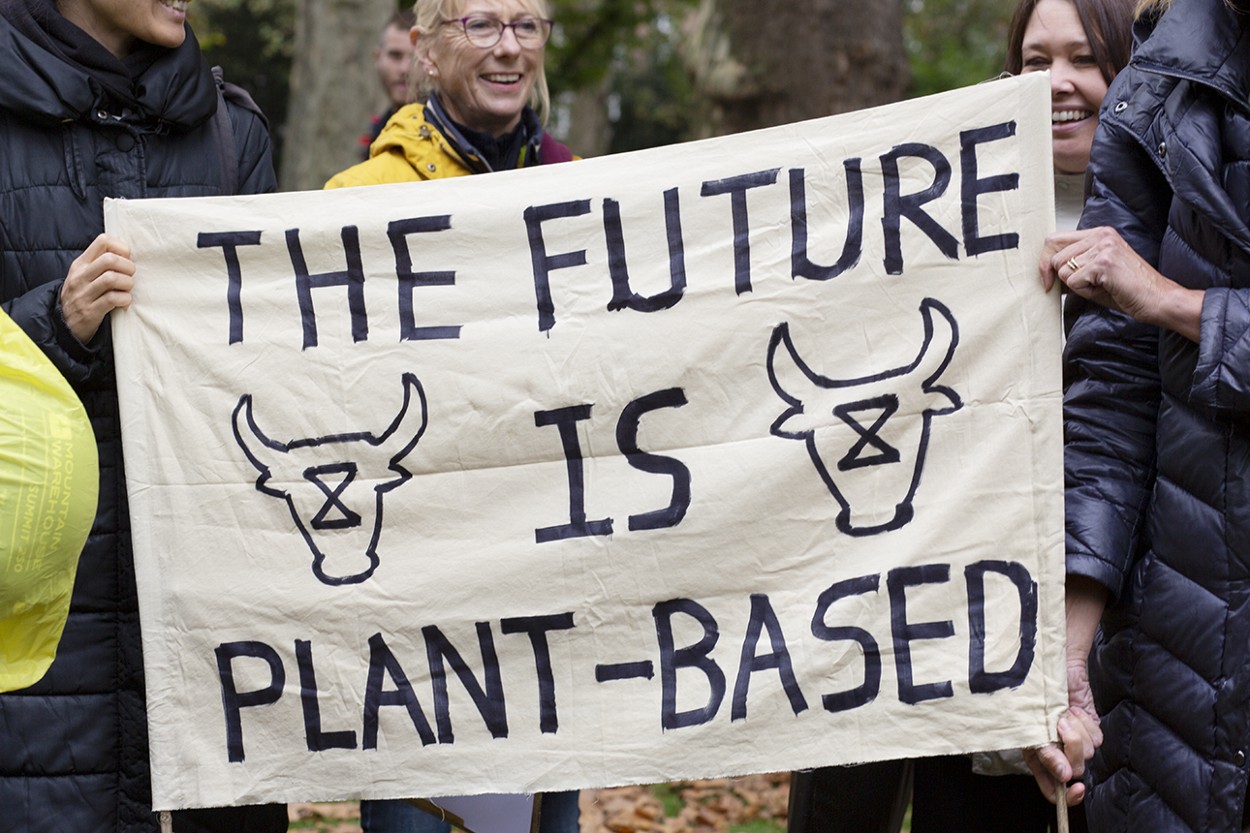 Mainstream media would have us believe that supporters of a plant-based food system and animal farmers are enemies. These two groups of people are often pitted against one another on opposite sides of the climate crisis, although, contrary to this belief, The Vegan Society states: “It is the system that is at fault, not individual farmers, who are just trying to make a living like everyone else”. Introducing the Grow Green campaign in 2015, The Vegan Society supports and collaborates with farmers and advocates for policies that will help them transition to a more sustainable system. Similarly, Animal Rebellion promotes a ‘no blame, no shame’ culture and campaigns for system change to benefit the planet and everyone on it. This article aims to highlight the opportunities available to farmers, many of whom are beginning to accept the inevitability of a plant-based food system within the near future and are readying themselves for the transition.

Animal farming is no easy business. Without receiving government subsidies, which amounted to £70 million between 2016–2017, the UK farming industry would collapse. Jennifer Betit Yen is from Animal to Plant-Based Protein Exchange (A2Px), an agritech exchange that enables small to midsize animal farmers to transition from low return, animal-exploitive farming to more lucrative, sustainable and cruelty-free plant-based farming. She explains that farmers, especially those in the dairy industry, have been affected by declining incomes in the last five years. The industry is reliant upon government subsidies to stay afloat,as cow’s milk is priced lower than the cost of production. Most economists agree that, as consumers move away from cow’s milk and towards plant-based options, this reliance on subsidies is unsustainable. Forecasters predict that plant-based dairy alternatives will increase to a “market value of €19bn by 2022”; oat milk consumption has grown particularly quickly, making it the milk of choice for 25% of Brits, with sales increasing by more than 70% in 2018.

We are now accessing more evidence on this topic through mainstream media, shedding light on a market which has been quietly declining for years. Despite receiving large government subsidies, the animal farming industry has still been forced to stockpile produce in an attempt to hold its market value. Betit Yen explains: “In recent years, around 350,000 tonnes of excess powdered milk were stockpiled by the European Commission, in a move to prevent a backlash from the industry”. Public money is spent to bail out the industry when “few sectors are afforded the ability to continue to produce products in a declining market…This is neither a sustainable solution nor an ethical use of public funds.”

The harmful impact that animal agriculture has on our planet can no longer be swept under the rug, acknowledged even by large corporations. The general public and farmers alike are able to make better informed decisions about how every day actions affect their futures and that of the planet. For Adam Arnesson, a farmer from Jannelunds Farm in Sweden, the need for a more sustainable agricultural system is pushing a transformation in his business: “We are transitioning towards more plant-based food because of the importance of the environment and climate change”. Arnesson is shifting away from goat’s milk and instead beginning to produce oat milk with support from Swedish oat milk manufacturer, Oatly. Researchers studying the environmental effect of Arnesson’s transition to plant-based farming found that the amount of greenhouse gasses emitted had halved in the first year alone, whilst calories produced for human consumption had doubled.

For many small-scale animal farmers, their livelihoods are ingrained within their family history, a business passed down through generations; the commitment to preserving the family legacy therefore makes it a difficult decision to leave the industry. When our children are at the centre of this emergency, however, with their generation being the one who will suffer the most drastic effects of climate change, our decisions become clearer. Young leaders, such as Greta Thunberg, are driving the fight against the climate crisis; calling for governments to make dramatic systemic changes to save the planet — for us and for non-human animals. As knowledge of animal agriculture’s detrimental environmental impact spreads, accompanied by improved support systems, an increasing number of farmers are making the transition away from animal farming.

In addition to the severe environmental impact, the decline in consumption of animal products comes as a response to growing awareness of animal farming practices. As video footage and exposés continue to be released, an increasing number of people can witness what happens behind closed doors within animal agricultural industries, leading to a growing percentage of the population to boycott on ethical grounds. The ‘Dismantle Dairy’ campaign, for example, which was created by animal rights group Surge, has exposed the horrific treatment of dairy cows that is common practice within the UK.

Whilst the public is becoming more aware of the exploitation of non-human animals, very little is heard about the suffering of those who are forced into doing the killing. A startling report recently published by the BBC highlights how working conditions can lead to exhaustion, suicide and social isolation. One former abattoir worker opened up about her job and the effect it had on her mental health: “One skill that you master while working at an abattoir is disassociation. You learn to become numb to death and to suffering. Instead of thinking about cows as entire beings, you separate them into their saleable, edible body parts. It doesn’t just make the job easier — it’s necessary for survival.”

In the Uk, 75,000 people are employed in ‘meat-processing’, of whom approximately 69% are from European Union member states. The abattoir worker also remarked that “nobody talked about their feelings; there was an overwhelming sense that you weren’t allowed to show weakness. Many were migrant workers, predominantly from Eastern Europe, whose English wasn’t good enough for them to seek help if they were struggling”. Thanks to the increase of supportive organisations, workers may now have better access and assistance to finding alternative employment, particularly in the growing plant-based food industry.

As a result of tight margins and unpredictable costs, such as vet bills, farm-related incomes can be unreliable, but by transitioning to plant-based industries farmers and landowners open up new opportunities. The Vegan Society suggests different ways land can be utilised to meet the needs of the UK population, such as being “repurposed for renewable energy production, natural reforestation to capture carbon, commercial forestry or [for] biodiversity benefits”, with subsidies to support these proposals and funding for market research and development. This is supported by Alexandra Clark, a sustainable food consultant, as she states: “It is imperative that governments support these efforts and aid this transition by allocating funds to grant initiatives that will assist farmers in acquiring new skills and equipment to meet these changing needs”.

Jay Wilde, from the BAFTA-winning documentary 73 Cows, is one example of how The Vegan Society has already helped farmers successfully transition away from animal agriculture. The former cattle farmer took his herd to an animal sanctuary rather than an abattoir and now produces organic vegetables on his land with plans to open a vegan bed and breakfast in the future. Similarly, Sivalingam Vasanthakumar, a UK sheep farmer, decided one day to take his flock of lambs to live out the rest of their lives at animal sanctuary — he has since transitioned to growing vegetables and selling home-cooked Indian food. Organisations give farmers the option to make these decisions, as their support will help them move forward. Farm Transformers, founded in 2017, aims to build sustainable plant-based business solutions for farmers transitioning out of animal farming. By working together, they can better understand farmers’ needs in order to offer sound practical, logistical and financial advice, as well as new farming methods.

Meanwhile, Refarm’d is an organisation which aims to transform all dairy farms into animal sanctuaries and to adopt plant-based milk production. During the transition, the farmed animals are kept as sanctuary animals, whilst the farmers are assisted with retraining and various types of support in their new ventures. Founder Geraldine Starke highlights the importance of farmers earning a good wage and improving their livelihoods in the process. Starke’s long term plan is to expand into plant-based cheese, yoghurt and cream production.

There are many opportunities for plant-based businesses to succeed in place of animal farming. Take Hodmedod, for example, a British quinoa company founded in 2012. It has since grown to work with over 20 farmers and is now sourcing over 100 tonnes of pulses and quinoa annually for supply to retailers, caterers and manufacturers across the UK. Hodmedod farmers began with Fava Beans production, which have been grown in Britain for hundreds of years, and are committed to sustainable plant-based food production, stating that “Fava Beans are delicious, nutritious and good for the soil and bees”.

Now is the time for government action; the animals and the planet cannot continue to suffer at the hands of humans and an out-dated system. It is time for employees in animal agricultural industries to choose other options — they no longer need to endure unhealthy working conditions. Success stories of farmers and factory workers transitioning away from the industry are not rare, but are, in fact, increasingly common. It is clear what the government must do to aid these industries during the transition: redirect subsidies, support organisations which will in turn support the workers, and most importantly transition to a plant-based food system.

How a just and sustainable food system could change the world

Volunteer to help build a just plant-based future
What is the Future of Animal Farmers?
Scroll to top
PLANT-BASED FUTURE ACTIONS HAPPENING NOW!