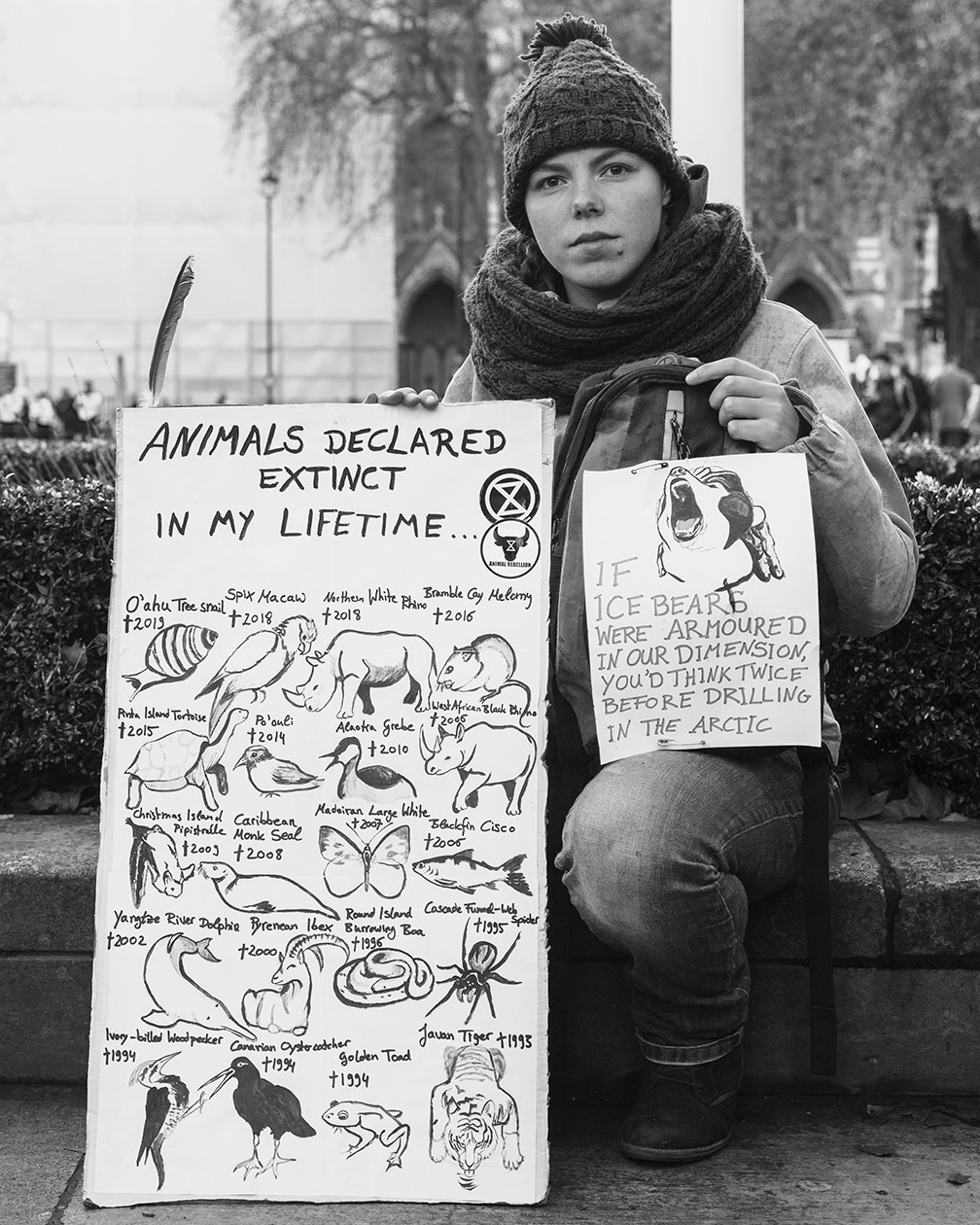 So far Extinction Rebellion and Animal Rebellion have had so much to celebrate. They have achieved great things. Before Extinction Rebellion, the existential threat climate change poses wasn’t widely discussed in popular culture or taken seriously. In the space of a few months XR changed the tone of that conversation forever. This is a massive shift and a great achievement that we can take pride in.

We can also celebrate its effectiveness

Talk must produce results, and as I write this there is an election coming and climate change is now an election issue even for mainstream parties. Also, the UK government plans a citizens’ assembly to look at the climate emergency (albeit watered down from what has been demanded). This is a result!

For such a young movement, any results are better than no results

I recall one of the Extinction Rebellion stalwarts at Westminster this October who acknowledged that there might be a 99% chance locking to an immovable object in the road was just pointlessly disruptive. But, they noted that if there was a 1% chance that this symbolic action might result in real action, it was a necessary gesture. Because doing nothing — in other words continuing with ‘business as usual’– guarantees extinction.

We changed the debate

The focus of the debate has shifted from individuals changing our light bulbs, abandoning plastic straws, driving electric or going vegan — important as all of these changes are — to examining the very nature of what passes for ‘civilization’ around these parts; questioning growth, progress, and the myth of capitalism as a desirable good thing for all. Our civilization’s faith in ‘business as usual’ has been exposed for the terrorist force it is: if allowed to run its course, it will make terminal and irreversible alterations to our mutual planetary life support system.

Personal change is important, but not enough

On a personal level, Extinction Rebellion has changed everything for me this year by shifting the focus to system change. I, and other likeminded people, have been changing our lightbulbs for 40 years or more, (so much for urgency!). I cycled to India because I didn’t want to fly, and have had a guilty conscience ever since about every flight I’ve taken, long or short, offset or not. I’ve changed every lightbulb I possibly could. I can’t possibly use any fewer plastic straws, can’t physically ride any more bikes or go any more vegan than I already am. I used whatever privilege I have to buy myself into a co-housing community, which was at the time, the largest Passivehaus development in Europe, powered by community owned solar and hydro.

Individuals made many of those changes and as we learn more — about palm oil, tetrapak or helium party balloons, all we can do is make ritual, tokenistic, conscience-torturing changes to our personal lifestyles, as if we are the problem. If my lifestyle was the problem, and I changed it, why has the rate of extinctions gone up in my lifetime? Global vehicle pollution doubled? Global meat production doubled? Because whatever changes you and I make, the juggernaut grinds on around us.

The Rebellion has helped lift the debate out of blaming and shaming of the powerless individuals trapped aboard the machine and into questioning the machine itself. This movement has changed that debate. The juggernaut goes by many names — variants on Capitalism, Colonialism, Progress or Patriarchy, and the debate is now around these structural mechanisms of violence and destruction — for which we as a movement can be justifiably congratulated. All of us can be proud to have been part of it whilst we examine and reflect on our personal learnings, insights and oversights. As a movement this is a good time to question how we ourselves act out unconscious dominance patterns learnt from growing up in the juggernaut.

We are (almost) getting to the point of realisation that “every environmentalist has to be an anti-capitalist, and vice versa.” We need to urgently examine where the various liberation struggles intersect and overlap, and add: “every environmentalist needs to be anti-racist, and vice versa” or ‘feminist’ or ‘anti-colonialist.’ or any other from a long list of conscious and unconscious structural oppressions. As environmental activists who grew up riding on the juggernaut we must reflect and challenge our role within all liberation struggles. Let’s decolonise ourselves and our movement, firstly because it is the right thing to do, and secondly so we can get on with saving the planet from ourselves.

What else is missing?

Speciesism is one of the most inconvenient and unavoidable conversations we will have to engage in now. We have to address how environmental justice is inextricably intertwined with interspecies justice and all other justice struggles. Otherwise, despite the progress we have made, we will fail to get to the root of the climate and societal crisis we are facing. Even if the wider public does not want to get involved in animal rights/liberation debates per se, speciesism should be addressed. If we remain silent on this issue, it cannot ultimately win the battle against the climate crisis and the harmful forces that are fuelling it.

Extinction Rebellion and Animal Rebellion recognize that the climate crisis is not an isolated event, but is fundamentally intertwined with other ideologies and systems of oppression. In a recent article on Medium, Sam Knight of Extinction Rebellion wrote: ‘We want the movement to develop a deeper analysis of capital and control, and to acknowledge more publicly the crises of capitalism and colonialism that are in no small part responsible for this crisis’. This is an important move on the part of Extinction Rebellion. Capital is from the same word root as “chattels,” an Old English word meaning “goods” and derived from the same word as “cattle.” How we measured or appropriated wealth was per head (per capita) of cattle, and in a very real sense this carries over to contemporary times. (Just think of the nation which most embodies Capitalism/Colonialism today and consider how important to their identity their heroic dominance myth is: the Cowboy, the steers, and the conquest of the West). African and other slaves were referred to as “chattel slaves.” The capital of their muscle power was owned, controlled, contained and legally traded by an elite class. This system has been legitimised at various times in history by theories of racial, gender or class elitism, and is bolstered by theories of difference and inferiority or superiority. Hence the call to ‘Decolonise’ the juggernaut and for us to own our failings, and to ‘Decolonise XR.’ And Extinction Rebellion is working hard to achieve this. As Knight explained, ‘We talked about economics, politics, science, race, class, gender, sexuality, religion, capitalism, colonialism, militarism, power, growth, degrowth, protest law, ecocide, reparations, climate debt, anarchism, socialism, democracy. We talked about everything we could with everyone we knew.’ It is crucial that we are having these conversations. But, the list of issues that Knight outlines is glaringly incomplete. We cannot omit the invisible ‘ism’ which lies at the root of it all: speciesism.

Speciesism is central to the debate, not a sideshow

Speciesism is at the root of extinction crisis and the habitat and biodiversity loss we now face. Let us consider the domestication of animals, the ownership of cattle. Cattle graze in fields, and the field is the original assertion of ownership and control of the wild planetary environment. The innocuous word “field” is an old English word meaning “the place where the trees have been felled.” It is to this control and containment, this original act of colonisation, that we can trace all those other intersections of which we need to talk. We need to be able to question the original idea that humans are different and superior and therefore can do what they want with all other living beings. Speciesism underpins our unconscious belief in our right to dominate all other species and our planetary life support system. We set ourselves up for disaster when we began to think that Human Nature was anything different to Nature itself, when we began to see ourselves in contradistinction to all other animals, as if we were not just another species of animals among myriad others, but somehow set apart.

The violence and dominance of speciesism is the main issue — the violence implicit in humanity’s disconnected relationship to the whole environment. Perhaps, once we step beyond our ingrained, anthropocentric world view, the relationship between speciesism and all other forms of ideological and structural violence will be exposed, and with that in our awareness, we can start to build a better world for all. Animal Rebellion is here to bring that message to the forefront. The only way we can solve the climate emergency is to solve the animal emergency, and that means ending the speciesist industries of animal agriculture and fishing driving greenhouse gas emissions and destroying natural habitats. Join us.

The Rebellion Has Brought the Climate Crisis to the Forefront… Now It Is Time to Address Speciesism
Scroll to top
PLANT-BASED FUTURE ACTIONS HAPPENING NOW!