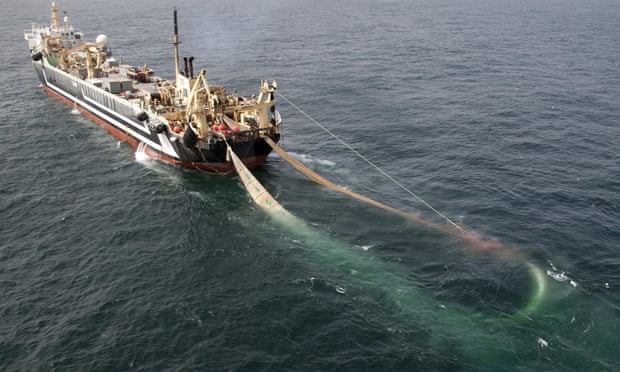 Have you heard of super trawlers before?

Super trawlers are massive fishing boats that haphazardly capture, freeze and store thousands of tonnes of fish and other sea life.

They are notorious for wiping out fish stocks and contributing to large scale extermination of dolphins, seahorses, whales, and turtles. But their damage doesn’t stop there.

Most UK fishing rights are currently in the hands of a few elite. FIVE families, all of whom can be found in the Times Rich List own super trawlers and control 29% of the UK’s fishing quota. Unsurprisingly, over half of the 25 top profiting fishing businesses were involved in evading designated quotas during the Black Fish Scandal, worth over £63m.

The 142-meter super trawler Margiris carries a net the size of 6 football pitches and can capture and preserve 6,000 tonnes of fish. A Greenpeace UK investigation found that Margiris, allowed to enter the English Channel in late September 2018, was operating in a Marine Conservation Zone. It was designated by the UK government in 2016 to protect the seabed in this area which provides a home for undulated ray classed as ‘endangered’. Unfortunately, these aren’t the only creatures threatened in our waters. However, the UK government’s “laissez-faire attitude towards ocean protection” was highlighted clearly by the lack of regulation methods implemented and that Margiris could legally fish in a Marine Conservation Zone.

The removal of damaging activities such as trawling at this scale is not a secret tool for protecting and allowing the recovery of our ocean life and ecosystems. The fact that specific regulations were not enforced allowed a boat of this magnitude to enter the narrow English Channel and to vacuum up 1,610 tonnes of fish.

Must the government wait until the rays, dolphins, bluefin tuna and sea bass all become extinct?

Fishing gear and other plastic pollution

Nets, lines, traps and other gear used for commercial fishing, amount up to more than 55,000 double-decker buses worth of discarded fishing gear! Sea pollutants are everybody’s problem — unfortunately (or fortunately) seas do not have borders and plastic pollution can remain floating in our oceans for decades — affecting all sea life from crustaceans and fish to whales and dolphins. Between 1950 and 2019 entanglements caused by fishing gear increased by 55% and a study found that 70% of macroplastic (larger than 20cm) floating the surface of our seas is fishing related.

Sadly, plastic damage doesn’t just stop at straws jamming in a turtle’s nose or the six-pack rings of beer squeezing and distorting their bodies. A pregnant Baleen Whale was found dead with fishing gear stuck in her filter-feeder system stopping her from moving and eating. A seal was found desperately trying to free herself from a fishing net strangling her neck, all the while making the net tighter and tighter.

How many more fatal sea deaths need to occur for our government to take a stand?!

Bycatch and loss of biodiversity

Super trawlers do not discriminate. They catch anything and everything that enters their path. With nets longer than a football pitch and as tall as a three-storey house, trawlers pick up A LOT of bycatch and illegal fish. The nets are so large there is no actual way to regulate the size of sea mammals and fish from being trapped in the nets. In 2012, with a quarter of her catch illegal, super trawler Maarartje Theadora was fined €595,000.

Some sea-mammals, such as seals, are lured to their deaths whilst searching for food as they swim into the trawler nets in an attempt to catch the small fish trapped in masses. In moments, the supertrawlers suck them in too. These sad fates are not met by seals alone; dolphins, whales and even two species of birds — shy albatross and black-browed albatross — are listed as “vulnerable” under the Commonwealth legislation. Though bycatch can be discarded back into the ocean — they are mostly injured or dead on their return to the sea impacting their stock as well as the wider food web.

Over 340,000 Mola Mola fish are caught as bycatch each year. They have already been ranked as a vulnerable species by the IUCN. Their big-boned structure and tendency to float mid to surface sea level leaves them in danger of being vacuumed into the trawlers. These beautiful fish can be anything from eight to fourteen feet by six/ten feet and weigh 4000 pounds on average.

Let us stand together to demand protection from our government for these endangered and dying species.

The European Union (EU) and the Common Fisheries Policy is supposed to prevent illegal fishing. Whilst the EU makes grand and empty statements about stopping illegal, unregulated and overfishing, it is actually part of the larger problem. Subsidies for new fishing facilities, fishing vessels and fuel are handed out to the same corrupt commercial fishing businesses part of the Black Fish Scandal. In truth, without subsidies being recklessly handed out, the fleet of supertrawlers operating across the EU would not be able to operate in profit.

Harmful subsidies are those that “promote overfishing and illegal fishing” which would otherwise be economically impracticable. A report from 2019 suggested that without support from seven international government subsidies 54 per cent of high seas fishing would not be possible; the same report shows that US$20 billion provided by these governments were ‘harmful’. This shows how governments are compensating fuel costs — making it possible for super trawlers to reach the farthest distances of the ocean and destroy habitats, sea life and biodiversity.

The question remains that if governments contribute to the depletion of ocean life, who can we turn to for systematic change? The chief of the World Trade Organisation, Roberto Azevedo, himself said that no one questions the link between government subsidies and the depletion of global fish stocks.