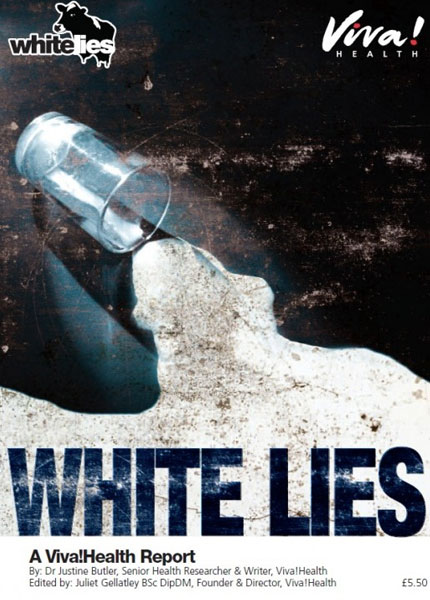 At a ‘Women in Dairy’ conference earlier this year, Dr Jude Capper, an ‘independent livestock sustainability consultant’ who also runs the ‘Februdairy’ campaign which attempts to promote animal milk, showed a slide during her presentation which featured two young children drinking what appears to be cows’ milk products. The message on the slide read, ‘Our biggest challenge is to keep dairy in the diets of future food purchasers’.

This targeting of children by the dairy industry is not new, even if, evolutionarily speaking, drinking the bodily secretions of another species is. Set against the 300,000 year history of our species, drinking milk is a relatively new habit. Before about 10,000 years ago, hardly anybody drank milk, and then only on rare occasions.

It was in 1924 that local education authorities in the UK were permitted to provide children with free milk. In 2005, in a paper published in the Economic History Review, Dr Peter Atkins of Durham University reviewed the motivations behind the introduction of cow’s milk in schools during the first half of the twentieth century (Atkins, 2005). He stated that the nutritional benefits of school milk were debatable, possibly even negative in those areas where it replaced other foods, but noted that the dairy industry did well, creating new markets at a time of depression.

Many may not realise that, even today, when childhood obesity is one of the greatest challenges facing us, the government still subsidises milk for children. According to the government website, the scheme ‘subsidises the cost of milk, certain milk products and yoghurts for school children in England, Scotland and Wales. This means that the products can be sold to school children at a lower price. Schools must offer drinking milk before they can supply other eligible milk products or yoghurts. Schools, local authorities, suppliers or other organisations can claim for the subsidy’. The Nursery Milk Scheme allows early years settings and schools to claim back the cost of providing one drink of milk per day to all children under the age of five. I have been unable to find evidence for the total cost of the scheme to taxpayers, but according to Viva, ‘In the academic year 2003 to 2004, around one million school children in England drank 34.9 million litres of subsidised milk at a cost of around £7 million’.

However, the true cost of dairy produced by commodifying sentient animals is harder still to calculate. According to Compassion in World Farming, ‘We have devised a distorting economics which takes account of some costs such as housing and feeding animals but ignores others including the detrimental impact of industrial agriculture on human health and natural resources.

Professor Dieter Helm, chair of the Natural Capital Committee which advises the UK Government points out: “the private costs of farming do not reflect the full social costs”. He continues: “Farmers can avoid costs, by passing on their wastes to others to clean up. Thus fertilisers, pesticides and herbicides can flow into the water supply, for water companies to clean up — and for the water companies to charge their customers accordingly. Slurry and agricultural effluents can leach into the water systems. Land is drained to force off flood waters for others to cope with. Carbon is emitted from the soils without paying a carbon price. Overuse of antibiotics drives up the costs to health care as antibiotic resistance builds up … biodiversity has been reduced without consequences to the farmers who have caused it.” We are all paying the price for animal agriculture, whether directly or indirectly.

Similarly, a report by the UN Food and Agriculture Organisation (FAO) has said: “In many countries there is a worrying disconnect between the retail price of food and the true cost of its production. As a consequence, food produced at great environmental cost in the form of greenhouse gas emissions, water pollution, air pollution, and habitat destruction, can appear to be cheaper than more sustainably produced alternatives”. The dairy industry is huge, with around 264 million dairy cows currently in the system. In order to provide milk, like all mammals, a cow has to be pregnant and to give birth. The usual method uses forced impregnation of restrained cows via artificial insemination. Calves born as a result are separated from their mother, usually within 36 hours, to prevent calves drinking their mothers’ valuable milk. This process is usually highly traumatic for such maternal mammals. Most male calves are killed at or soon after birth, or raised for a short time before being killed in order to produce veal. The females usually face the same bleak lives as their mothers-until they are unable to produce enough milk to be profitable to the industry, when they too will be sent to slaughter.

Numerous scandals of truly barbaric treatment of animals on dairy farms have been regularly exposed-the most recent being the undercover filming of dairy farms throughout the UK over an 18 month period by the campaign group Surge. The footage shows scenes of appalling cruelty towards newborn calves and their mothers. The campaign is #DismantleDairy and the shocking abuse, which was documented on every single farm where cameras were placed, can be viewed online.

The cost to us all of allowing the commodification of sentient beings and the downward market pressures on meat and dairy imposing increasingly abhorrent conditions for these gentle creatures isn’t the only cost though. We are in a climate emergency. The environmental impacts of dairy farming are horrendous. According to the US Department of Agriculture Natural Resource Conservation Services, dairy operations can use upwards of 150 gallons of water per day per cow in total, including the water used for drinking and cleaning, and whilst this may be lower on less intensive systems, the efficiency costs are shocking. A University of Minnesota paper quoted in Compassion in World Farming’s report concludes that for every 100 calories of grain fed to animals, we get only about 40 new calories of milk and for every 100 grams of grain protein fed to animals, we get only about 43 new grams of protein in milk. Each cow produces on average 37 kilos of waste every single day. Conventional dairy farming depletes nutrients in the ground and uses huge quantities of fertilisers — which account for roughly 1% of the world’s total energy consumption, whilst methane and nitrous oxide, a climate-warming pollutant 298 times more powerful than carbon dioxide are produced by the industry in huge quantities on every system through the very nature of a cow’s digestive system.

Every nutrient found in milk is available from plants, and the targeting of children and their parents is a particularly odious tactic used by the dairy industry to secure their own profits and future. The organisation ‘Cool Milk’, which runs a scheme for schools and parents to provide milk in schools, has a page called ‘Why milk is great’ on their website which illustrates the way in which parental concerns are used to promote milk. Infographics feature unlabelled graphs and colourful pictures spreading positive messages about milk on children’s health, yet each one features in the small print-very easily missed tucked away at the bottom-admissions that dampen down the hype somewhat. “There appears to be a need to assess this in controlled studies’, ‘the infographic is based on evidence from three available studies…a causal relationship cannot be concluded…more research is certainly needed’. But hey, when they’re offering a free fridge to schools who sign up, who cares? None of the health risks of milk are mentioned, nor the cholesterol, saturated fat, somatic cell counts (pus) limits allowed in milk. Nor is there any mention made of concerns by medical professionals that the bioactive molecules in cow’s milk may direct undesirable regulation, growth and differentiation of various tissues in humans. Of particular concern for example is the insulin-like growth factor 1 (IGF-1) which occurs naturally in milk and has been linked to several cancers in humans.

Dairy farming costs us all in one way or another, even if you personally eschew dairy in your diet. The environment, the health costs both to individuals and the state, the subsidies we all pay to this industry through the tax system. Children in the two-thirds of the world that can’t drink milk aren’t suffering from osteoporosis or rickets; in fact, China and Japan, where dairy is not traditionally a staple food source have lower rates of these conditions than Europe. It is frankly unbelievable that the government subsidises an environmentally damaging, unnecessary product and aids the dairy industry in seeking to secure its future profits using children.

The cost to us all is far too high to continue with this archaic system which targets the most vulnerable.

Are We All Being Milked?
Scroll to top
PLANT-BASED FUTURE ACTIONS HAPPENING NOW!