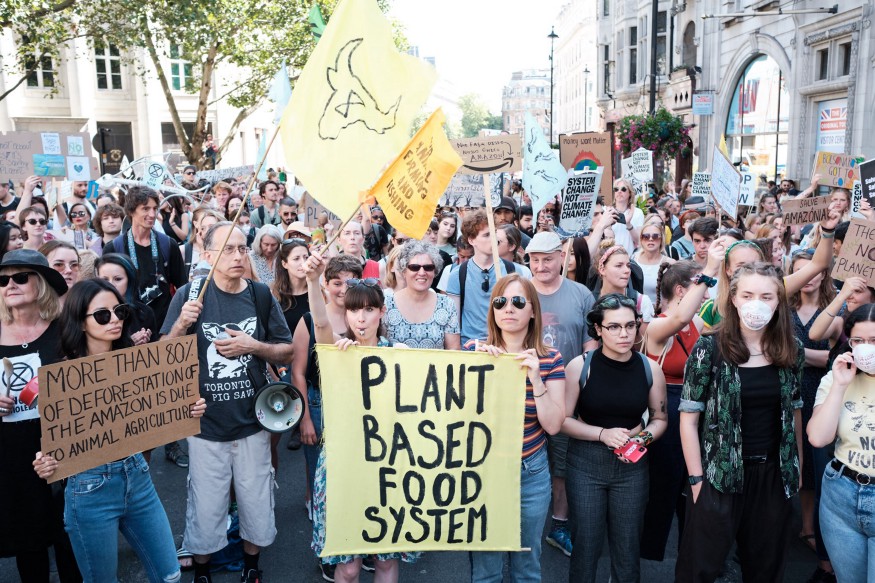 Most of us who formed Animal Rebellion were already involved in other animal justice groups such as Save, Animal Justice Project, AV, Hunt Sabs, and local action groups, as well as animal advocates from academia, the media, and other walks of life.

We knew that, as people who care for animals and fight for animal justice with and alongside our animal kin, it would be the worst kind of injustice to leave the safety and security of all animals out of the picture. We also know that, because of animal agriculture’s impact on the planet, from the burning Amazon, to the greenhouse emissions, to the water usage and degradation of our soil, you simply cannot fix the climate emergency without ending the animal emergency.

Why are we in alliance with Extinction Rebellion?

We know that time is running out and that if we don’t come together as a unified force, right now in this moment, then all that we love and all that we have worked for will be lost.

That’s why Extinction Rebellion introduced its Movement of Movements strategy as a crucial part of the International Rebellion in October and beyond. It will see a range of groups take to the streets together in a unified call for immediate action on the climate and ecological emergency.

And that’s why Animal Rebellion signed up, despite differences, to be a sister organisation to Extinction Rebellion and all the other groups. Separate and autonomous, but working together as rebels.

The Movement of Movements — also known as The Rebel Alliance — aims to include a wide range of groups from across society — doctors, farmers, academics, faith communities, international solidarity communities, peace groups, women’s groups, youth groups, and disability groups — as well as the animal justice community.

Together with Extinction Rebellion, we are calling on as many groups as possible to take part. We are asking all Rebels to help make this happen. We’ve signed a Memorandum of Understanding and have agreed on principles of how we work together. There are a number of resources to help support any groups that want to be involved.

Together, our alliance will culminate in the International Rebellion from 7 October, in solidarity with similar actions taking place across the globe.

Animal Rebellion is calling for people from all over the UK to come to London in October because the evidence is clear: a transition to a plant-based food system is critical to avert climate breakdown and mass extinction. And we believe it is the crucial first step in achieving total animal liberation.

We know that the only way we can ever be powerful enough to transform our society is if we find common ground on which to stand together with other movements and make unified demands of the government that they cannot ignore.

Our very survival depends upon this. The survival of all animals depends on this. We must build a mass movement powerful enough to force the government to tackle the climate and ecological emergency all of us face. No group or organisation can do this alone.

It’s time to take a stand.

Get prepared. Bring your friends. Bring a tent. And rebel for ALL life.

What is Animal Rebellion’s Relationship with Extinction Rebellion?
Scroll to top