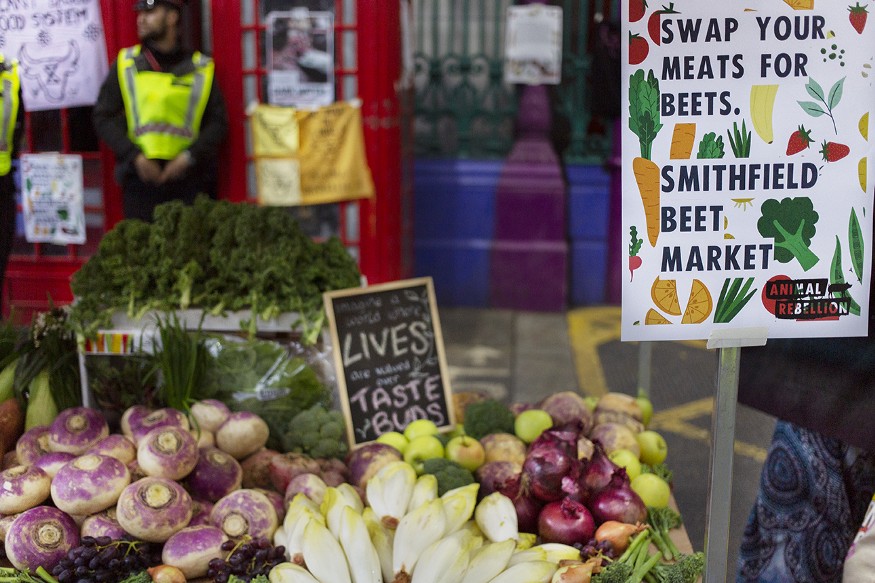 Animal Rebellion is responding to the climate catastrophe the only way one should: with love and fruit. In the face of total climate (and social) breakdown, Animal Rebellion is challenging our poisonous system in an unconventional but incredibly potent way: with apples, beets, and broccoli and a hefty dose of genuine loving kindness.

The images and videos that have been emerging in the press and on social media since October 7th, of hundreds of animal rebels camped peacefully inside the main hall of Smithfield Market, the UK’s largest meat market, and one of the largest in Europe — a symbol of the cruel, toxic, and destructive food system in which we currently live — are magnificently inspiring and uplifting. In these still and moving images we witness the rebels — just regular people from all walks of life who have decided to band together peacefully to save the animals and the planet — sitting side by side in the great hall of Smithfield Market, where butchered animal corpses are normally sold, singing songs of peace and love and dancing with joy at the potential for meaningful historical transformation. They are surrounded by market stalls overflowing with fruits and vegetables, and decorated with encouraging signs that read things like: “Swap your Meats for Beets.” These bright, colourful, and cheerful images are the basis for a hope desperately needed in the face of growing violence against other animals and increasing disregard for their wellbeing.

Just a few days ago, a farm in Guangxi province in southern China announced it has started breeding pigs as heavy as polar bears (500 kilograms or 1,102 pounds) in order to make more money per kill and to make up for a “pork shortage” which has apparently resulted in large part from a recent African swine fever epidemic. Major pork producers in China such as Wens Foodstuffs and COFCO Meat Holdings Ltd. are intending on following suit by increasing average weights for pigs. One can assume it is only a matter of time before North American and European and other global pork producers join in on the latest trend in agribusiness. This is devastating news for pigs.

As in the case of so-called “broiler” chickens, or chickens raised for meat, as a result of their monstrously unnatural size, the pigs will likely suffer excruciating pain throughout their short lives as their bones break from under them, their organs fail, and their hearts give out. It is unclear if they will be able to walk at all. Their humiliation and degradation will be complete. It is ironic that pigs are universal symbols of greed and insatiability, when in fact it is human beings (entrapped in a barbarous system) who seem unable to sate our own appetite for cash and flesh, no matter what the ethical cost.

One image accompanying a Bloomberg article covering this story features a woman, named a “visitor” in the caption, sat astride a large pig on whose body Chinese characters are scrawled. This image could hardly contrast more with those coming out of Animal Rebellion’s peaceful occupation of Smithfield Market. These images show that human wellbeing is not achieved on the backs of other animals, literally or figuratively, or at their expense, but rather alongside them — as friends, companions, and allies — with their wellbeing, and the wellbeing of the entire planet, as front and centre as human wellbeing. As Animal Rebellion knows, human flourishing is inextricably linked with the flourishing of the earth and all the other beings who call it home.

To bring universal flourishing to fruition, Animal Rebellion is demanding system change. And it is doing so intelligently, thoughtfully, lovingly, and peacefully. This change will not happen overnight. But it will happen. It has to. And more and more people are waking up to this reality. As one lorry driver who joined the rebellion at Smithfield put it, “I never imagined I’d be doing this but it was a matter of conscience. If all these things are happening, when my time comes I don’t want to think I didn’t do anything to stop it.”

3 thoughts on “Love and Fruit in the Time of Catastrophe: Animal Rebellion Converts Smithfield MEAT Market into Smithfield BEET Market”