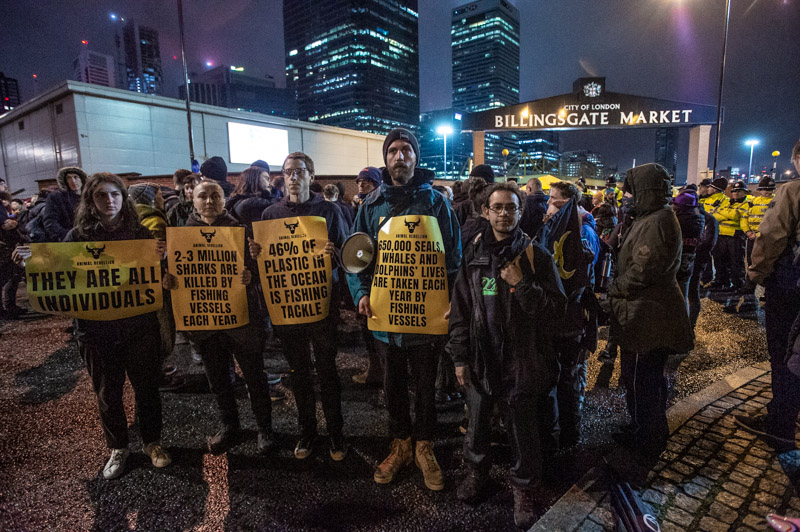 As Animal Rebellion activists invite Billingsgate Fish Market into dialogue on the climate crisis and the plight of the the 2.3 trillion marine animals killed every year, we look at this often forgotten victims of our current food system.

It’s easy to forget about fish or to dissociate ourselves from them and them from food, unlike cows, pigs, and sheep, which we see all around us in the landscape. When we order a salmon steak in a nice restaurant, collect a battered cod from the local chippy, or buy our favourite mackerel pate in the supermarket, we’re not usually thinking of these aquatic animals as sentient beings. It’s not often covered in the media that fish are aware of their emotions and can feel pain, though science proves this is the case and it is recognised in EU law. When we do recognise their sentience, however, and we consider the suffering fish are subjected to through the fishing industry, we soon realise how inhumane the process is. Compassion in World Farming is the leading farm welfare charity, which is dedicated to campaigning to end all farming practices. This charity spearheaded a campaign called ‘Rethink Fish’, which explores the starvation and slaughter that fish are at threat of. Alex Lockwood explains how, in order to empty the fish gut, starvation is required for 2–3 days and, unbelievably, they are sometimes left to endure thisfor 2 weeks, or more, until they eventually die. Slaughter methods may involve gassing with carbon dioxide or cutting the gills without stunning, whilst others are left to suffocate in air or on ice. These sentient creatures experience fear and feel the pain of these brutal methods: the suffering endured is unthinkable.

Fish farms are on the increase. Known as ‘aquaculture’, these farms are unlike commercial fishing that harvests wild fish, they cultivate both freshwater and saltwater populations. It is true that ‘meat, aquaculture, eggs, and dairy use 83% of the world’s farmland and contribute 56 to 58% of food’s different emissions, despite providing only 37% of our protein and 18% of our calories’. It is also true that we are facing a global fishing crisis: we are over-fishing our oceans. Aquaculture is not improving this situation either, as ‘approximately one quarter of all wild-caught fish are used to make fish feed. This comprises of somewhere between 450 billion and 1 trillion individual fish. In other words, it can take up to 120 wild caught fish to raise a single farmed salmon’. Our oceans do not have an endless supply of marine life and if fishing industries continue in this unsustainable way scientists estimate we will see fishless oceans by 2050.

While media coverage tries to distract us with campaigns against the use of straws, leading us to believe this is the answer to the worldwide plastic pollution problem, a survey from the Ocean Clean-up campaign has revealed it is in fact the fishing industry that contributes 50% of the plastic currently filling up our oceans e.g. fishing nets and other equipment. In an article by Jill Ettinger, she explores the plastic pollution crisis contributed to by the fishing industry and discusses the unintended marine life that becomes trapped in active nets. These animals, known as ‘bycatch’, suffocate in these ‘mile-long webs of plastic’. She goes on to say, ‘overfishing is leading to the rapid decline of marine life as plastic pollution [increases]; some experts estimate that we will see more plastic in the oceans than fish within the next three decades’. It is a well-known fact that plastic does not decompose, it only breaks apart forming microplastics, which is defined as plastic smaller than 5mm. Microplastics reside in both fresh and salt water systems and research shows that 50% of aquatic insects are found to have microplastics inside of them. These microplastics are then consumed by people when they eat seafood. The full extent of harm is not yet understood, but scientists heed strong warnings and are putting a lot of energy and resources into their research. It is estimated that humans who regularly eat seafood may be consuming up to 11,000 plastic fragments per year and, considering the chemicals involved, scientists believe this can only be damaging to the human body. This is not a problem specific to shellfish, as more and more fish are being found to have plastic inside them too.

Aside from the major issue of plastic pollution caused by the fishing industry, it may come as a surprise to know that fish actually produce more methane, measured by the kilo, than land farm animals. According to an article published in Science, by J Poore and T Nemecek (2018), ‘we find that freshwater aquaculture ponds create 0 to 450g of methane per kg of liveweight (for context, enteric fermentation in dairy cows creates 30 to 400 g per kg of liveweight)’ (3). Together with the release of organic effluents or disease treatment chemicals in the water, this indicates that aquaculture is not as sustainable as many believe. Another article in Science, states even ‘the lowest-impact aquaculture systems still exceed emissions of vegetable proteins. This challenges recommendations to expand aquaculture without major innovation in production practices first’.

It is clear that the fishing industry is inhumane and unsustainable for the planet and we need solutions. It has been proven that wind farms help to regenerate the ocean bed and fish sources. The currently over-farmed fish for aquaculture purposes puts increased pressure on wild fish as we deplete their food sources. Research shows that to have a growing fish population there is a limit on how many tonnes of fish we can catch per year. If we catch slightly more than this limit then we wouldn’t be able to maintain a stable fish population. Shockingly, EU regulations allow the fishing industry to catch around double this recommended amount, to the detriment of our ecosystem. Furthermore, due to lack of policing, the reality is that the fishing industry is going way past these limits and seriously over-fishing our oceans. This is highly unsustainable and our oceans are drying up of marine life, with serious danger of never being able to recuperate. These off shore areas dominated by the fishing industry are prime spots for wind farms. With the reliably high and relatively steady wind speeds, they present the ideal conditions required for wind turbines. Once constructed, the base of the turbines also plays an important part in the regeneration of the ocean bed, serving as a habitat for fish and giving them the opportunity to repopulate.

In summary, the fishing industry is depleting our oceans of marine life and we now know that it is a major player in plastic pollution, being responsible for an incredible 50% in our oceans worldwide. The inhumanity of fishing practices, which cause pain and suffering to these sentient aquatic animals, is unacceptable. All these issues need to be addressed and public support for radical change is growing. Fish are often ignored so they need our help to amplify their voices, in order to fight with them against this cruel industry and help end their suffering.

Where Is the Compassion for Sentient Marine Animals in the Fishing Industry?

2 thoughts on “Where Is the Compassion for Sentient Marine Animals in the Fishing Industry?”