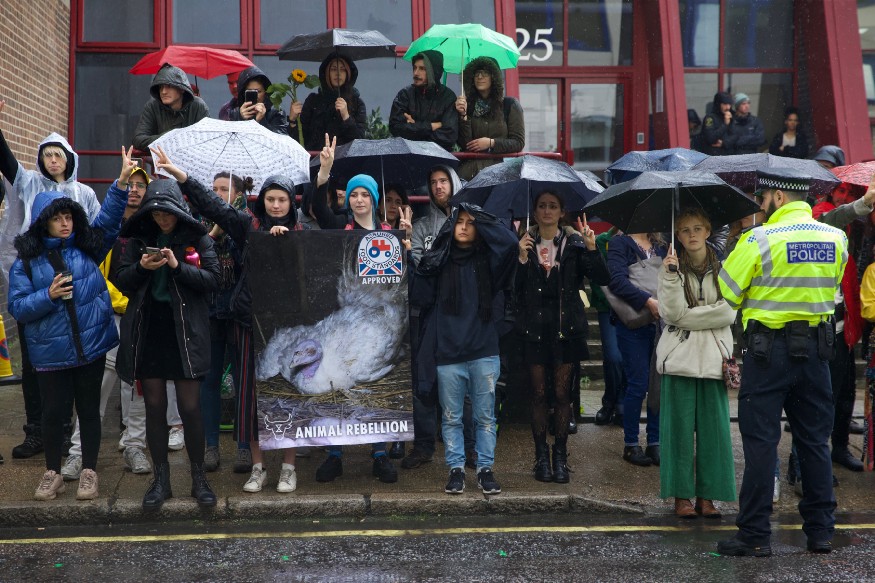 ‘Facts are irrelevant. What matters is what the consumer believes’, said Seth Godin, American author and business executive. Animal agriculture and its representatives are well aware of this fact and consumers’ desire to be reassured that the products they purchase are ethical and of high quality. But how many are aware that labels, assurance schemes and terms such as ‘humane’ and ‘farm fresh’ mean very little for the 6.4 billion animals killed for food in the UK every single year?

Animal Rebellion has been protesting at the headquarters of Red Tractor, a product certification programme that is made up of a number of farm assurance schemes for food products, animal feed and fertiliser. Red Tractor was launched in 2000 by the National Farmers Union of England and Wales. It is the largest food assurance scheme in the UK, used by 78,000 farmers across the country, and claims to ensure food is traceable, safe and responsibly produced.

The National Farmers Union, as the name suggests, claims to represent farmers. George Monbiot has said that the NFU ‘helps enrich millionaire landowners while destroying biodiversity, polluting water and wiping out pollinators’. The fact that a farming organisation (which has supported both the badger cull and fox hunting, and which has consistently lobbied against any limit being put on the subsidies that large farmers receive) is behind an assurance scheme for consumers seems to many to be a conflict of interests. How can an organisation representing producers concerned about profits be trusted by consumers concerned about standards?

Even farmers have expressed concerns. Alastair Crown, a pig farmer from Co Londonderry was quoted in the Farmers Guardian in 2017, saying, “Red Tractor gives people this idea the produce they are buying is high welfare. But who defines high welfare? Who regulates Red Tractor? They just make up their own standards and as long as their farmers buy into it they are allowed to sell their produce under this banner. It is promoting the intensive production of animals.”

Red Tractor’s credibility has been shattered through numerous animal welfare scandals on farms it has accredited. In a major expose in the Daily Mail, Lambrook pig farm in Somerset was described as a ‘hell hole’, with both dead and living pigs lying covered in their own filth. These intelligent animals were held in small, dirty concrete pens and provided with no mental stimulation except for chains hanging from the ceiling. Yet even after being made aware of the terrible conditions, Red Tractor audited the farm and passed it as acceptable.

Rosebury Farm in Dunstable had passed five Red Tractor inspections in 2018 including one in July (all of which the farm had been alerted to in advance) before it was filmed by animal activists. Footage revealed a tiny piglet being swung by one leg and smashed against the wall (after which it continued to kick for at least ten seconds before dying), piglets screaming as their teeth were clipped off without pain relief, pigs being illegally and repeatedly shocked with electric prods, a piglet left frothing at the mouth on a pile of corpses, dozens of dead piglets littering the floor of the farrowing shed, live piglets trapped in cages with dead siblings, pigs crammed into barren pens so small that they were forced to lie on one another during a heatwave and at least one animal suffering from a tumour or hernia.

Earlier this year, three Red Tractor certified farms were exposed by Animal Equality. Chickens were filmed with red-raw skin, dead and alive birds crammed together into overcrowded sheds. Bin bags full of dead birds were found at one farm and staff were filmed breaking birds’ necks and leaving them to convulse on the ground for several minutes. Staff were also filmed deliberately stepping on and kicking birds and one was filmed being thrown against a wall. Many birds couldn’t stand up and were trapped on their backs and sides, desperately kicking and many starving.

The Red Tractor scheme allows multiple cruel practises such as tail-docking of baby animals, teeth grinding of pigs, zero-grazing of dairy cows, long journeys to slaughter and cramming of chickens into sheds with little room to express natural behaviour. Farrowing crates, which trap mother sows in enclosures they cannot even turn around in so as ‘not to allow excessive free movement’ are acceptable under the Red Tractor banner, as are concrete slatted floors where sows can be immobilised for long periods. As George Monbiot has said, ‘the Red Tractor standard is a classic example of an almost meaningless label, whose purpose is to reassure customers in a vague and fuzzy way while holding producers to standards that scarcely rise above the legal minimum’.

Criticism has also been levied at Red Tractor’s inspection scheme. Unannounced visits are as low as 0.08% and, as an Efra select committee noted, farmers can opt out of them. Furthermore, farmers pay for the inspections and can choose which private certification company visits them. Not very reassuring, despite the launch of new standards this year.

Other schemes are viewed more favourably by animal welfare organisations, such as the Soil Association and RSPCA’s Freedom Foods certifications which demand stricter animal welfare procedures. So does this mean that animal products from these schemes are acceptable? Again, only undercover activism has revealed abuses of even the best systems. The Soil Association last year refused to suspend an organic dairy farm in Somerset supplying its milk, despite condemning footage where distressed calves were filmed being brutally force-fed and hit by a worker. Several cows were filmed with their back legs chained together in shackles, newborn calves less than a day old were filmed being dragged by the back legs into separation pens away from their agitated mothers and denied access to water for up to 29 hours , a worker was filmed standing on a calf with his full body weight whilst shouting obscenities, distressed newborn calves were seen struggling as workers shoved feeding tubes down their throats-a procedure that can damage the throat or be life threatening if the tube goes into the lungs. This farm was also in the RSPCA Assured scheme and supplied Waitrose — although both suspended it following the footage. The Soil Association condemned the footage but continued its support.

You have to wonder why, time and again, animal activists are the ones uncovering extreme animal cruelty in the meat, dairy and egg industries. Red Tractor may be among the worst, but even among the best such as the RSPCA’s independent assured scheme, routine practices such as the maceration or gassing of live, day old male chicks are allowed because they are legal. RSPCA Assured recommends that when pregnant cows are slaughtered, any foetus should not be removed from its mother for at least five minutes but that ‘if a foetus is found to be showing signs of life, it must immediately be killed with a captive bolt or by a blow to the head with a suitable blunt instrument’. Calf slaughter is considered humane when no more than 3% of calves slip and no more than 5% cry out in the abattoir. All schemes can only work in the current framework of what is legal and farm animals have few legal protections against appalling suffering both during their lives and their deaths.

One of our great silences

‘The way that meat, eggs and milk are produced is surrounded by one of our great silences, in which most people collaborate. We don’t want to know, because knowing would force anyone with a capacity for empathy to change their diet,’ said George Monbiot. Most people don’t want to know what happens behind slaughterhouse walls or inside factory farms — nor, even on organic, free range farms legally. Most people are uncomfortable with animal suffering and the truth is that animal suffering is integral to animal agriculture.

Animal Rebellion has targeted Red Tractor because of its appalling failures but we believe that no slaughter can ever be humane and that commodifying sentient beings is wrong.

Facts are facts. Only a plant based food system can truly reassure consumers that cruelty is off the menu.