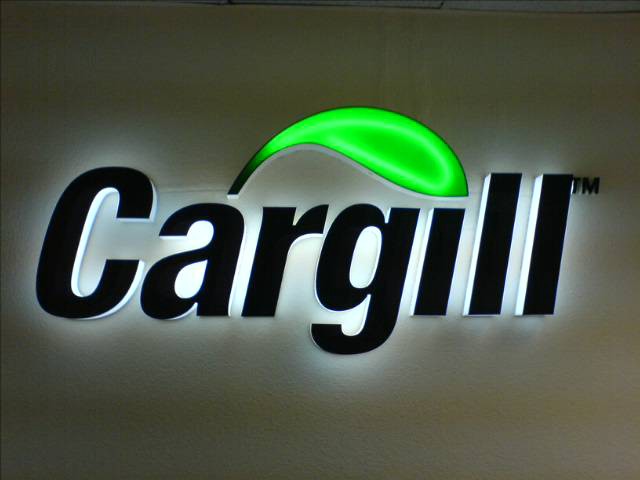 An open letter from Animal Rebellion to the ‘silent giant’ that holds the fate of many of the world’s forests, billions of worlds’ farmed animals and much of the global food-system in its grip.

Over 140 years Cargill, whilst remaining little-known, has grown to be one of the largest traders of commodities for the animal-agricultural industry. Your company is one of a handful that control up to 90% of the worlds grain markets. Your company is also the largest worldwide producer of the grain-based feed for farmed animals and the third-largest “meat processing” company in the world.Today, your agri-business is the largest food-conglomerate in the world.

Astonishingly, all this makes your organisation directly accountable for: the life and death experiences of billions of commoditized animals every year; for a critical amount of deforestation, air and water pollution; for the wellbeing of the animals fed your grains and ‘processed’ by your plants; for the welfare of millions of humans that work within its supply chains; and for the health of billions more humans that consume the animal products that Cargill directly and indirectly profits from.

Cargill is also the largest family-owned business in the world: your family members hold together a 90% stake. Until now, you have overseen a strategy of keeping a deliberately low-profile, but today Animal Rebellion is asking you to call time on that secrecy!

During the International Rebellion, rebels called for Cargill to #TellTheTruth about the real costs of their business. We are calling for you, the Cargill family, to step up to your responsibilities to farmed animals, to humans and to the planet — the home of all of us.

Cargill family: you have perhaps more power than any company past or present to either destroy the planet or, instead to lead the transition to the only form of a just, sustainable food-system there is: a plant-based one.

The world needs you, Cargill, to #ActNow! Help end the harmful and destructive animal farming industries that are fuelling climate breakdown and ecological collapse. Will you join us today on the right side of history?

Unfortunately, much of the Cargill story known to a public concerned about ecological destruction and animal justice is one of deforestation, air and water pollution, dangerous food contamination, human rights abuses and tax evasion. Just some of the most striking examples include:

Animal farming — the ‘meat industry’ — relies on about 75% of the world’s soy — of which you, Cargill, are the largest producer and which is fed to the animals slaughtered in your plants. Globally more than 1,000,000 square kilometres — three times the size of Germany — is dedicated just to growing soy.On top of this, you are one of the world’s largest importers and exporters of palm oil, and direct owners of five palm oil plantations .

This means you must own up to your company’s responsibility for the destruction of tropical and lowland rainforests and carbon-rich peatlands that have characterised this trade and have contributed significantly to climate change and the disruption of hydrological cycles, as well as the destruction of many wildlife habitats. It also means you have to bear responsibility for emitting, together with the other two largest meat-producing businesses — more greenhouse gases that the whole of France.

In 2014 Cargill signed a landmark deal with 150 other countries, businesses and civil society organisations, pledging to eliminate deforestation by 2020. However, years on from that and your company has continued to expand its operation into new, pristine forest outside the Brazilian Amazon, whilst resisting the extension of the deforestation-free production agreements into these areas.

In June 2001 a Cargill subsidiary was fined for misleading officials about emissions of pollutants such as carbon monoxide, found to be at 15 to 50 times the legal level and just three months later Cargill was fined $1.5 million for illegally dumping pig manure near its facility in Missouri, killing 50,000 fish. In the years that followed, there were many more incidents of environmental pollution, including toxic brine released into water ways, phosphorous-laden chicken waste spread on fields, more pig manure releases and tens of millions more fish killed.

And all of that is just in the US…before describing the rivers and land of indigenous peoples claimed to be seriously polluted by pesticides sprayed on fields from overhead. Some local populations of soy plantations report an increase in birth defects, cancers and respiratory illnesses, and the loss of domesticated animals from herbicide exposure.

Cargill has been responsible for more than ten widespread outbreaks of E. coli, Listeria and antibiotic resistant Salmonella since 2000, some of which have been deadly and requiring the recall of hundreds of tonnes of contaminated animal products.

Troubling past allegations of enslaved children involved in the production of some of the raw materials that Cargill purchases, including cotton from Uzbekistan and cacao from the Ivory Coast, have been named in an ongoing court case, as well as on its own palm oil plantations in Papua New Guinea.

Also at the PNG plantations, formally independent farmers are being converted into de facto bonded laborers, and indigenous communities have consistently reported the destruction of their natural habitats and intimidation through violence in zones claimed to be producing for Cargill.

In 2018 the UK Revenue and Customs won a £79 million tax avoidance case against Cargill (together with Goldman Sachs), related to the acquisition of a gas-fired power plant from the collapsed firm Enron in 2001. Seven years earlier, Cargill, along with several other grain mega-traders, was accused of substantial tax evasion by Argentina.

All of these reasons are why we speak directly to you, Cargill family. Your operations acutely impact the wellbeing and survival of beings from all walks of life, from all species, across the globe. The world needs you NOW to lead your industry in shutting down the mechanics of animal exploitation and environmental destruction, and in putting an end to practices that harm tens of billions of sentient beings.

You have the choice, and the world’s eyes are upon you now.

We warmly welcome your investment in plant-based protein producers (such as the pea-protein supplier to Beyond Meat)and cultivated meat technologies (Memphis Meats and Aleph Farms), and you have recognised the importance of these alternatives in feeding the world. However, you continue to cling to your identity as a ‘traditional animal protein’ company. Many of your competitors are embracing the switch to being “protein” companies, such as Tyson Foods, whilst others have taken the next step to creating their own plant-based protein products, such as Maple Leaf Foods and Smithfield Food. By making similar changes in your operations, Cargill could have an enormous impact on food sustainability, environmental health and social and climate justice.

We also welcome your investment in charitable initiatives to support food security — like your recently-launched initiative with Heifer International “Hatching Hope”. However, this partnership aims to improve the nutrition of 100 million people by 2030 based on greater production, promotion and consumption of poultry. We urge you to use these opportunities to leave behind the destructive and harmful practices of animal farming, and help vulnerable communities to feed themselves with foods that are more , more sustainable and more ethical: plant-based foods. The enormous amount of food we directly feed to livestock should be fed directly to those who need it.

Lastly, we applaud you also for listening to your customers, and listening to the concerns of the individuals that consume the animals that you process. Just last year you radically altered your slaughter process for chickens at your London plant, reducing the distress experienced by these sentient beings in response to welfare concerns. Cargill, we believe these welfare concerns are only going to increase as the public becomes rapidly more informed about the suffering of farmed animals and as they are faced with the stark facts about the central role of animal agriculture in the climate emergency. Today, we say that listening to your customers and consumers can only mean spearheading a global shift towards a plant-based food system.

Cargill: you have enormous influence over today’s food and agricultural systems and over the companies that work within it? Crucially, you have a massive impact on wellbeing, and now the survival, of tens of billions of living beings whose habitats, livelihoods and very lives are now facing extreme risk.

We now know that a plant-based food system is the only system that can minimise the risk of climate breakdown, halt mass extinction and avert social collapse.

With your investments and your infrastructure, we can we can start the urgent project to build a just and sustainable plant-based food system for the planet.