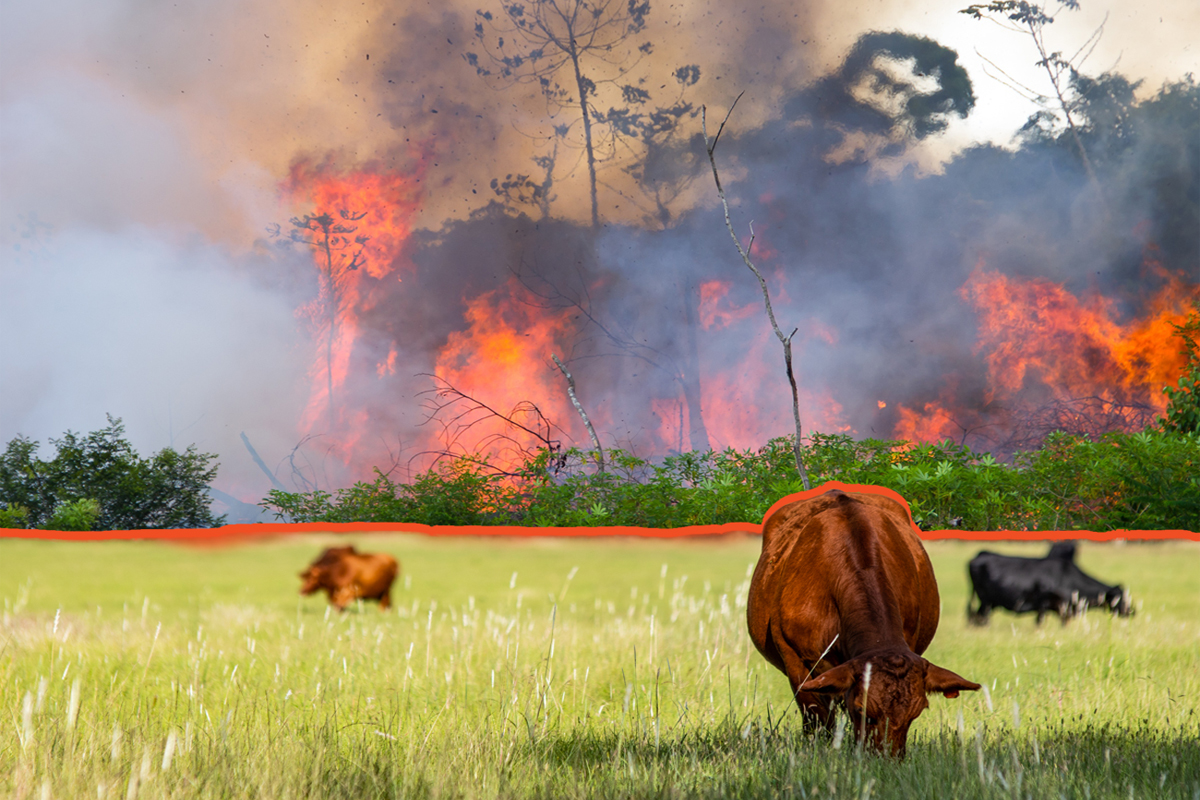 For over three weeks thousands of acres of once lush green forests of the already severely threatened Amazon, home to local indigenous communities and millions of animal, bird, insect, and plant species, have been burning.

According to Brazil’s space research centre Instituto Nacional de Pesquisas Espaciais (INPE), over 75,000 fires have now been spotted in 2019 so far — an 85 per cent increase from the same period last year.

It’s believed around one million indigenous people from up to 500 tribes are at risk from the fires, while hundreds of thousands of other animals for whom the dense forest is home, are desperately trying to flee, or are dying agonising deaths in this human-made inferno.

Massive amounts of carbon are being emitted into the atmosphere as smoke billows up from the blazes and blankets entire cities such as Sao Paolo, blocking the sun, and turning day into night. The fires are not restricted to Brazil but are affecting other countries in the Amazon basin. In Bolivia, video footage from its Santa Cruz department shows monkeys and other animals running in search of shelter from the fires, amid burning trees and a blackened landscape. The European Union’s Copernicus Atmosphere Monitoring Service (Cams), reports that smoke has reached the Atlantic coast.

While Jair Bolsonaro, Brazil’s right wing president, has been pointing the finger at NGOs for igniting the fires, there is no evidence to support this claim. In fact, evidence points squarely at Bolsonaro himself for inciting farmers to set the forest ablaze in order to clear the way for cattle grazing land and soy production.

Bolsonaro has made no bones about his apparent death-wish against the Amazon and its human and nonhuman inhabitants. Upon entering office, Bolsonaro proudly asserted that he would be dismantling existing environmental protections to make way for agricultural land expansion and intensified production and his policies have reflected this.

According to OpenDemocracy (DemocraciaAbierta), recently leaked documents suggest that Bolsonaro intends on wreaking yet more havoc on our earth’s respiratory system, by cutting through it to build hydro dams, bridges, and highways to service the booming agricultural sector. To crush opposition before it has a chance to form, Bolsonaro plans on increasing government presence — which will almost certainly translate into intimidation and aggression, and perhaps worse, against local communities and activist groups — in the affected areas.

Meanwhile, indigenous communities’ legitimate claims to sovereignty within the region are being trampled on. Although not necessarily stated in the leaked documents, it is clear that part and parcel of Bolsonaro’s extremist ideology is the idea that cattle farming is integral to Brazilian national identity. At stake are not only local identities and ways of life, but life on earth as such.

Celebrities and global leaders have joined the chorus of public figures calling for action. Leonardo Decaprio, Madonna, and Ariana Grande, among others, have expressed horror and apocalyptic scenario, while president Emmanuel Macron tweeted, “Our house is burning. Literally,” and called for the fires to be a top priority in discussions at the upcoming G7 Summit.

But much more urgent action at the grassroots level is needed. The climate is already in major crisis and these recent events only accelerate our headlong journey to catastrophe. We cannot rely on world leaders like Macron, who have a vested interest in maintaining the eco- and zoocidal status quo, to save the earth in yet another round of talks. It is past time to take matters into our own hands — to take to the streets and in peaceful protest demand swift action to slow the tide of destruction.

To this end, we animal justice activists from newly formed movement Animal Rebellion joined climate justice group Extinction Rebellion outside the Brazilian Embassy in London on Friday 23rd August to mass protest the Brazilian government’s responsibility for the fires raging through the Amazon rainforest. Around a thousand people attended the protest, which was led by Brazilian indigenous groups. In line with Animal Rebellion’s use of non-violent civil disobedience to bring about change, the protest included an occupation of the street outside the Brazilian Embassy and surrounding area.

While Bolsonaro, lit the proverbial match, the global animal agricultural industry and the desire for animal flesh around the world are ultimately the main culprits.. Condemning Bolsonaro for his negligence is paramount, as he is directly responsible for this latest act of zoocide. It is essential to take Bolsonaro to task for his ruthless and unforgiving scorched earth policy, but he has only brought to a head an already perilous situation for which our totally unsustainable profit-driven and exploitative global food system is fundamentally to blame. We are facing an existential crisis that can be mitigated but by no means solved by removing Bolsonaro from office and boycotting Brazilian products. An entire overhaul of the global food production system is needed.

Through peaceful civil disobedience, governments worldwide need to be pressured to take a cold hard look at what it is really fuelling this inferno — global animal agriculture.

Our governments need to commit to taking immediate steps to transition to a sustainable plant-based food system. According to the UK government’s own report, agriculture is estimated to be the driver for around 80 per cent of deforestation worldwide. Approximately 450,000 square kilometres of deforested Amazon in Brazil are now cattle pasture. A 2015 study calculated that “pasture [cleared for cattle] was the dominant driver of forested area and related carbon loss in South America”. Compared to data from 1970, over 90 percent of the cleared land in the Amazon region has been converted to cattle ranching.

While we must rise up in peaceful protest against Bolsonaro and his shamefully irresponsible policies, we must also ramp up pressure on governments worldwide to change our food system now. Time is running out.

The Amazon Ablaze: Bolsonaro and the Meat Industry Are Fuelling the Flames
Scroll to top
PLANT-BASED FUTURE ACTIONS HAPPENING NOW!