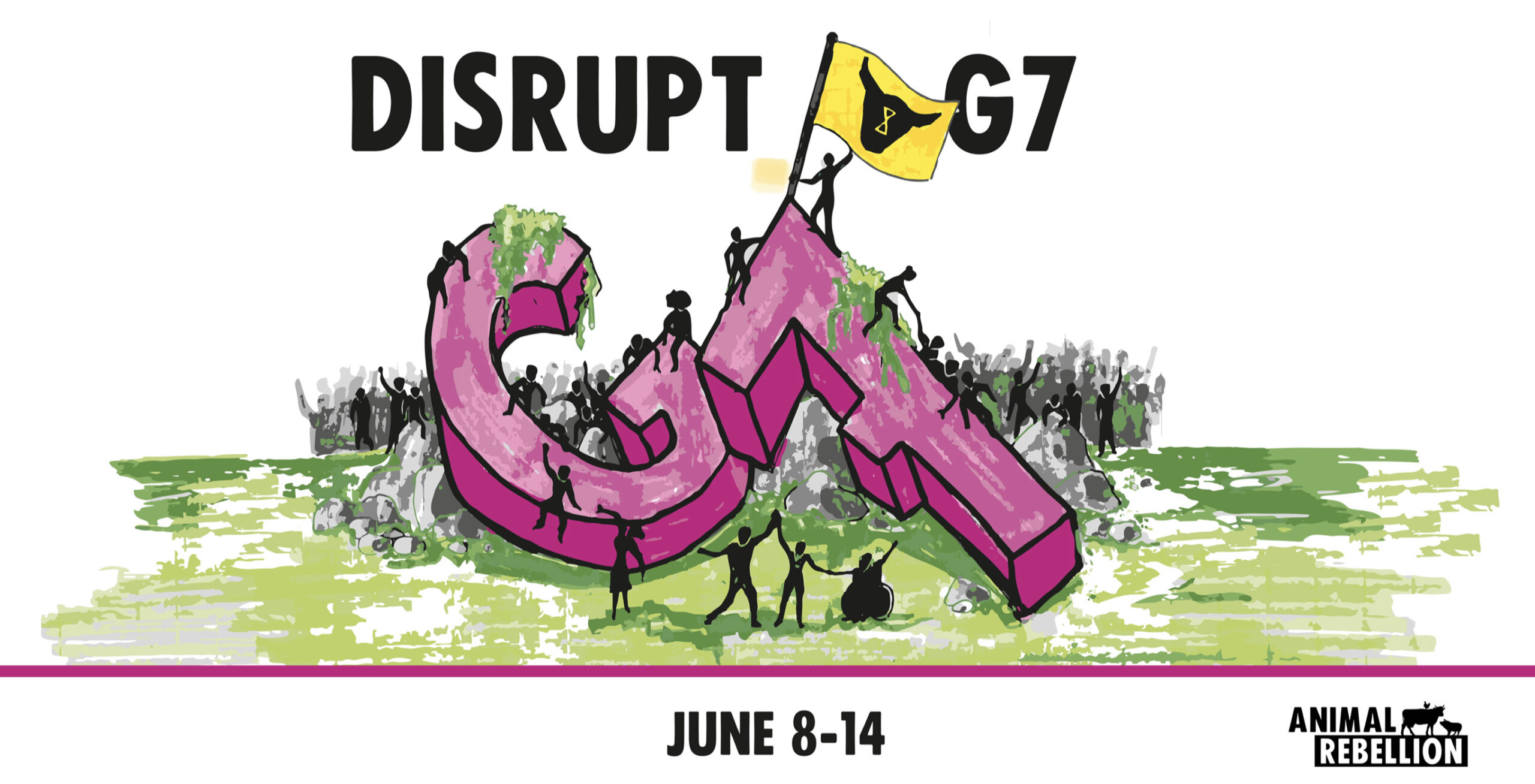 Every year heads of seven industrialised nations (plus two representatives from the EU, and guest/invited countries), who collectively own over 58% of global net wealth  meet at the Group of Seven (G7) conference. They claim their goal is discuss and resolve global challenges.

Despite said intentions, 46 years have gone by since the G7 coalition was formed, human economic activities led by G7 countries have degraded the Earth`s ecosystems pushing through some of the Planetary  boundaries and set off the Climate and Ecological Emergency.

The truth which G7 leaders avoid is that they are failing to fulfill their assigned role to protect lives and planetary health for generations to come. This includes the G7 Food Security Working Group’s failure to secure resilient agricultural systems, food security and balanced nutrition for all. The criminal enabling role which G7 played in the Climate and Ecological breakdown cannot be ignored. G7 countries got rich by upholding an inequitable, anthropocentric, global economic and political agenda. The G7 leaders self-serving short-term leadership structure has failed each and every one of us.

While G7 countries themselves are facing emergency, for hundreds of millions of people , for millions of species in the wild, for animals in factory farms, and for humans most exploited in the Global South‘s frontlines of resistance, pain, suffering and the social and ecological crisis is not a forecast but a lived reality.

It is time for G7 to represent leadership as a service for all, not ruling for the benefit of the few.

Earth is home for all of us. 2021 is a critical year for climate action and all eyes are on the United Kingdom as the country hosts two summits that have the potential to change the course of history: the G7 conference in June and the COP26 in November.

This year more than ever, we have already seen movements unite in the spirit of true democracy, aiming to work together and in solidarity for a just transition, recovery and reparations, demanding immediate social and economic changes to keep global warming below 1.5°C.

We can reach our “North Star”, the vision of planetary health and human wellbeing, by ending  “Business as Usual” through immediate prioritisation of a major financial rescue effort for front line communities in climate vulnerable countries and for all non-human animals whose needs have been completely overlooked. This includes prioritising the broken global food system on the G7 agenda, to avert further food shortage, halt mass extinction, biodiversity loss, deforestation and prevent future pandemics. Science tells us that a rapid transition to a plant-based food system is not only possible but absolutely necessary. We urge G7 leaders to urgently divest from animal farming and fishing and lay out a path of solidary and equity for the whole of the food industry.  We call on the G7 to invest in ecosystem restoration and recognise the land rights of indigenous peoples.

Animal Rebellion is a global grassroot movement, demanding truth from governments and world leaders and corporations in power. G7 representatives hold a moral duty towards the whole of Earth’s current and future generations.

We stand beside in Extinction Rebellion`s and support their demands, as we, Animal Rebellion, extend those demands as:

G7 telling the truth about the climate and ecological emergency (CEE), this must include telling the truth about a plant-based food system. Animal Rebellion recognizes that one cannot speak about the CEE without openly talking about the impacts of animal agriculture on the planet. This includes, but is not limited to, deforestation, ocean dead-zones, biodiversity loss and air pollution.

We are heading towards a climate catastrophe and will be facing social collapse, mass starvation and the death of billions of beings if the G7 governments do not act now and act decisively. We focus on what is necessary and that is ending biodiversity loss and reducing greenhouse gas (GHG) emissions to net zero by 2025. We recognise this cannot be done without a transition to a just and sustainable plant-based food system and restoring degraded ecosystems.

Animal Rebellion is joining the resistance against a system of power holding, for a system of service and solidarity.  We continue being a part of a movement of movements, and create a roadmap to a healthy, sustainable and just food system for all. Together, we can re-imagine humanity at its best and walk into that shared future.

Animal Rebellion will be coming to Cornwall this year June 8-14 to set out these demands at the G7 conference. Will you be there or will you support us from home?