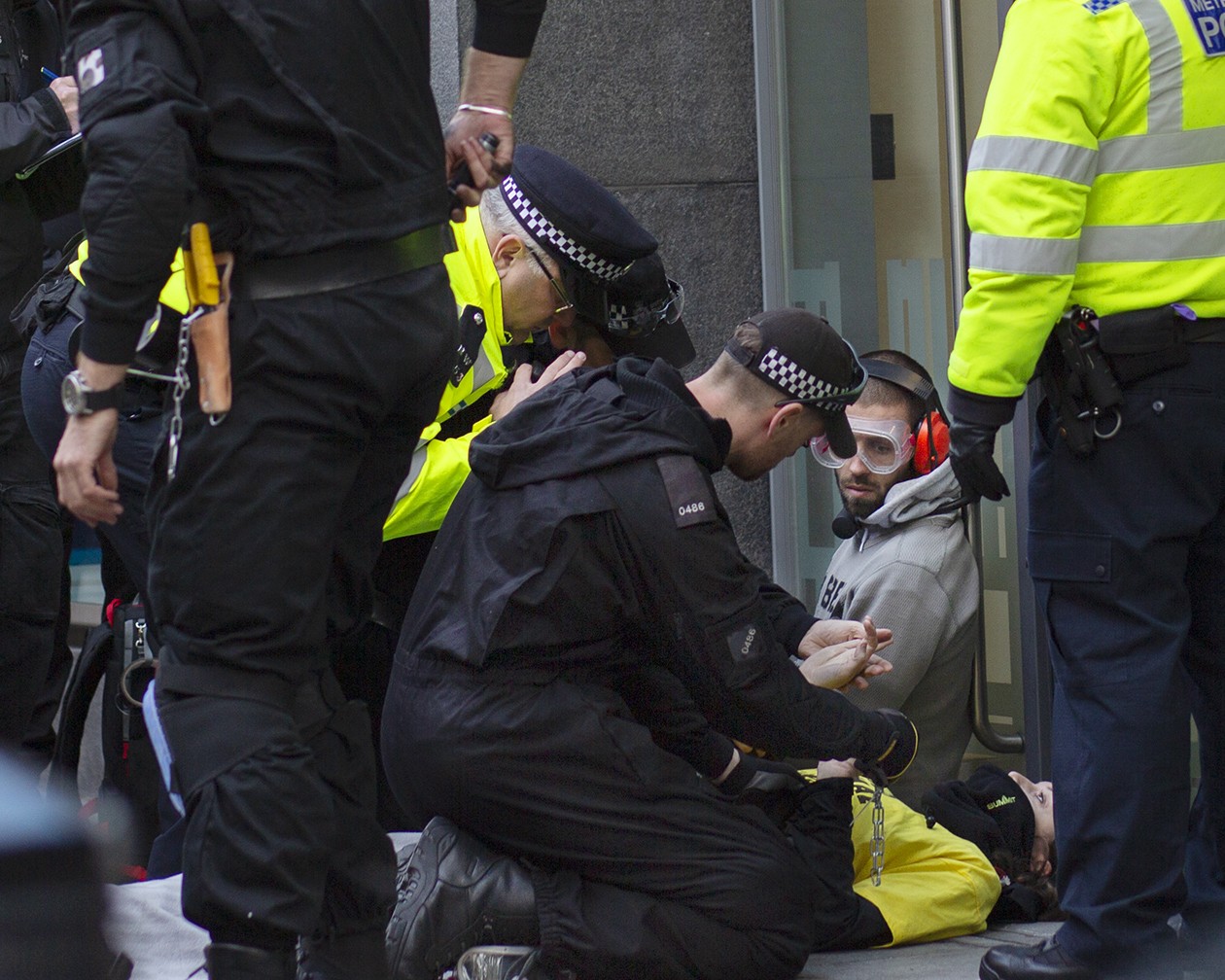 Animal Rebellion promotes civil disobedience as a catalyst for political and system change. We recognise the value of different campaign methods, such as lobbying MPs and signing petitions. However, there are other groups that already focus on these areas and they do it well. Our focus is on attention raising actions with higher consequences, such as risking arrest, and causing mass civil disobedience in full view of the public. We apologise for any inconvenience this causes, as our motives are directed towards the system, not the individual.

Nobody wants to be arrested. Sitting in a police station for hours on end, with your liberty at risk, a criminal record that could affect your career prospects for the rest of your life, and not to mention the legal fees. This is a serious and unpleasant situation that mustn’t be taken lightly.

Movements like Animal Rebellion use a strategy called Non-Violent Direct Action (NVDA). A feature of this involves ‘arrestables’: people who undertake action with the knowledge that it will probably result in arrest.

While the 2019 Rebellion officially ended on 19th October, many people had to wait much longer for their court cases to be determined before it was over for them. These are dedicated individuals who put their liberty on the line in protest of the climate and animal emergency. Hundreds of Extinction Rebellion and Animal Rebellion activists were arrested during the two-week protest in October.

The demonstration of arrestables shows the Government the severity of our situation and that our planet is worth making sacrifices for. Time is ticking. We are acting before it is too late.

This article tells the story of one rebel’s experience of getting arrested in the centre of the October action.

Early 2020 saw six activists arrested for NVDA when Animal Rebellion held Arla, a monolith dairy producer, to account for their impact on the environment: The meat and dairy industry is one of the leading causes of climate change. Protesting at Arla’s headquarters in London, Animal Rebellion urged this representative of the dairy industry to transition away from animal products and towards a sustainable plant-based alternative. Watch this short video to see how our rebels prepared for their arrestable action at Arla.

Just last month, two protesters were arrested when they turned the Trafalgar Square water fountains red for our Blood on Your Hands campaign. We brought international attention to the role governments are playing in exacerbating the climate emergency. Protests were held simultaneously around the world, including in the UK, Germany, Canada, Portugal, Australia, Finland, South Africa, Hungary, Poland, Spain, Netherlands, Sweden, Mexico, USA, and Romania.

Not all members of members risk arrest and there are vital roles to fill in all areas of the organisation. Parents and children help make signs and banners and support Animal Rebellion at protests and marches. People from the ages of 8 to 80 volunteer behind the scenes and on the frontlines. It takes all types of people to keep a movement moving.

Vast amounts of research have been carried out to study the methods used by campaigners around the world. Gene Sharpe’s This is an Uprising draws on the examples of Martin Luther King Jr and Gandhi to demonstrate how non-violent direct action (NVDA) is the most effective way to achieve change. NVDA uses creative and active ways to cause disruption, stealing the attention of the public and media to spread the message. Sharpe’s list of non-violent direct actions includes boycotts, road blocks, protests with banners and placards, singing and chanting, as well as hunger strikes and more high risk arrestable actions.

Non-violence in this form is not passive. It is a strategy for momentum-driven mass mobilisation and confrontation. It means the voices of the masses cannot be avoided by the media or silenced behind prison walls. This is an Uprising touches on examples of anti-war movements in the 1960s, women’s rights in the 1970s, and AIDS campaigns in the 1980s. What do they have in common? They all used NVDA and they all achieved historic change.

Mainstream media often portrays such actions as spontaneous acts of recklessness. Usually, putting the focus on young misguided adults. On the contrary, an arrestable action is meticulously planned for maximum effect. It is creative, brave, and powerful.

Power belongs to the masses, and if we unite for a shared cause, in the name of animals, people and planet, we will change the trajectory to a just and sustainable future for all. The Government must lead the transition for positive system change.

Learn how you can join the UK team
Join or form a local group
How to Win the Battle Against the Animal and Climate Crisis
Scroll to top
PLANT-BASED FUTURE ACTIONS HAPPENING NOW!