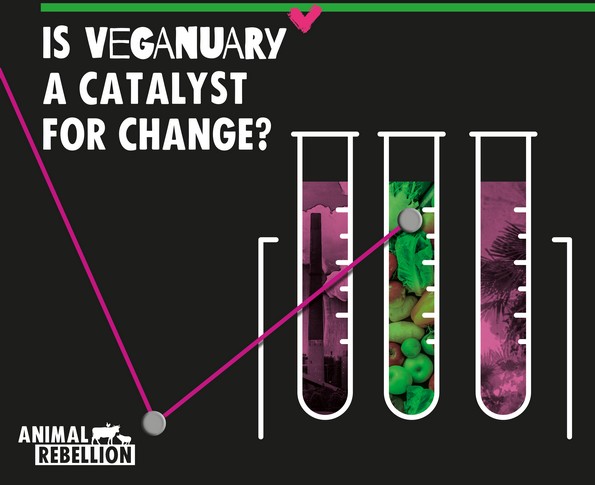 Veganuary is more than a challenge. It is a direct catalyst for food system change.

Around the world we face grave climate catastrophes and huge animal injustices. Data has shown time and time again that a plant-based food system is the best way to reduce our impact on the climate (Poore and Nemecek, 2018). Food can hold a lot of cultural value. However, culture is dynamic and as a society we are already showing that we are ready to align ourselves with the planet. We have been actively creating a shift in culture!

In 2014, Veganuary began as the first annual challenge for people to take a one-month pledge to go plant-based. The aim being to educate and promote veganism. Only eight years later and the global pledge to try plant-based for 31 days has risen to 2 million. In the UK, over 75 companies signed the Veganuary 2022 pledge. The rise in pledges is a true reflection of how we collectively wish to move forward. It is a powerful and active protest against our current system which unapologetically contributes to environmental degradation and animal injustices.

A core principle of Animal Rebellion is to focus on system change and not individual change.

The staggering uptake in the pledge to go plant-based around the world shows how Veganuary is enacting and facilitating system change. It is acting as a catalyst to change attitudes, behaviours and even the global relationship with food and its connection to the environment. Public behaviours and demands shape what companies create and sell to us. The popularity of Veganuary has led every supermarket to create their own plant-based line of food and fast-food restaurants to increase or add plant-based meals to their menu.

This is definitely a food system change heading in the right direction. However, it is not enough. Large food corporations like McDonald’s, Burger King, Subway and Papa Johns hold the economic resources to make impactful and substantial change in the way that we need to see. Their current changes are hopeful but these companies need to see entire food menus change to plant-based.

NO to “Less But Better“

Big corporations have felt the tide of scientific evidence piling up against meat, fishing and dairy. And some try to fight back to save this obsolete and injust meat and dairy system.

We can mitigate this climate crisis if we listen to the science and adapt. We ask for a just transition to a 100% plant-based food system, because no meat or dairy products are sustainable or just. Since 2020 we have seen an increase in the sales for plant-based products and as a direct retaliation we have also seen environmental organisation such as “A Greener World” promote meat and dairy consumption as environmentally friendly and just to animals.

The absurdity in this lies in the fact that countless studies have shown that meat and dairy is not sustainable for our planet (Mason and Lang, 2017) – so why are “green” organisations diluting the matter by redirecting our energy towards meat again? Plant-based is not only a simple solution, but a necessary one to build a positive future for everyone on this planet.
In addition to the environmental destruction caused by meat and dairy farming, we can not ignore that animals are sentient (Kumar et al., 2019). There is no humane way to kill a non-human animal just as much as there is no humane way to kill a human animal. All animals exploited can feel pain and joy. They want to live with their families and be free, just like us. It is unjust to separate a mother from a baby as is inherent to the dairy industry. To kill one individual is not justified when abundant nutritious food that can feed the world is available.

What are companies and organisations doing NOW?

It might have seemed unbelievable 10 years ago, but here we are: full organisations and companies are paving the way to a food system revolution. Where plant-based businesses led and innovated, big companies are learning from their mistakes and becoming part of the solution to the problems they are causing. Here are some food-system change highlights:

We disagree with the exploitation of animals (humans included) that these organisations continue to take part in with meat and dairy still on their agenda; however, we want to recognise these first positive steps being taken towards a fully plant-based food system. Whilst making plant-based more accessible and affordable, we can’t wait for them to transition to zero meat, fish and dairy!

Reasons to be hopeful

These days, the media is filled with this overarching sense of doom: that we have no hope because these industries have gone too far. However, if we zoom out and take into account all the above, we are already making an incredible impact.

Firstly, over 2 millions animals were not exploited and killed in January 2021, Veganuary estimated. This number is based on the Vegan Society’s Veganalyser calculator and Veganuary participant data including geographical location and pre-pledge diet.

Second, we estimated the environmental impact of the 580,000 participants in Veganuary in 2021. We based our calculations on the lowest quantity of resources saved from switching from a UK meat-eating diet to a plant-based one (scientific papers and organisations in sources). In 2021, Veganuary may have cut emissions by 15,777 CO2 tons, saved 48,000 metre square of forest and 72,442,000 cubic metres of water. Besides, eating plant-based food directly saved 31,552 tons of grains, which can feed people.

Thirdly, our movement is growing and a cultural shift is taking place before our eyes. Whereas before the media consciously kept meat and dairy out of the news, they are now increasingly joining the dots between meat, dairy, fishing and the environmental crisis. Their change in approach is a no-brainer when scientific studies show that a plant-based food system would use 4 times less land cover. Any plant milk emits at least 3 times less carbon emissions than dairy milk.

Lastly, as a consequence of the above companies recognise the role they can play by offering nutritious, plant-based food. They are taking steps towards increasing plant based options, but we have to keep the pressure on to ensure this only goes further.

Energy Secretary, Kwasi Kwarteng, said plant-based food is helping to cut UK’s emissions. “I think that there is a lot of societal change that will actually help us and drive the progress to 2035, where hopefully we will hit the 78 per cent reduction target.”

A JUST, PLANT-BASED WORLD IS NOT ONLY POSSIBLE,

IT IS ALREADY WITHIN OUR GRASP.

These estimations are based on research provided by the following organisations and articles: