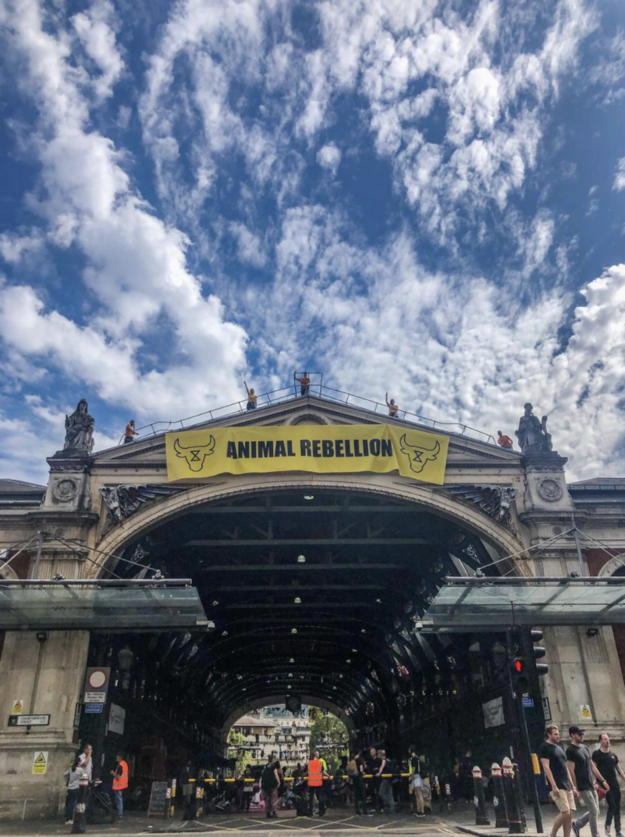 The Official Animal Rights March on Saturday 17th August was an incredible day, being both uplifting and motivating, heart-breaking and full of love. It was also our launch, the official first action of Animal Rebellion. And as a wholly new movement, there were of course many questions about who we are and what we’re about.

Some of these ranged from: why is an animal justice movement foregrounding climate breakdown, and not the animals? Why aren’t we talking about cruelty to animals more? Do we only care about farmed animals? And why announce Smithfield Market as the October target so soon?

We’re going to answer all of these questions. As a brand-new organisation, it’s incredible how quickly we’ve grown. While those involved day-to-day perhaps think the answers are clear, it’s easy to forget that it’s not the same for everyone. So over the next few days and weeks leading up to October 7th, we’re going to answer them here. Starting with the last question first.

So, why Smithfield, and why so soon?

Animal Rebellion has formed because we’ve been inspired by the success of Extinction Rebellion (XR), are terrified by the reality of climate breakdown, but know that any vision of the future we want to see must be one that includes animal justice and liberation.

So while we are demanding the same of government as XR, and we are employing the same tactics of non-violent civil disobedience, we felt it absolutely necessary to focus on the exploitation of animals, and animal agriculture’s major complicity in the climate emergency.

So that’s why we’ve announced our civil disobedience will be at Smithfield Market.

But if the Market knows we are coming, won’t they be able to prepare more easily to disrupt our occupation? Won’t it fire up farmers and butchers against us? Aren’t we targeting the working class and letting the wealthy elite and their government apologists off the hook? If we’re in solidarity with Extinction Rebellion, why aren’t we heading to Westminster with them?

This was something we debated for a while amongst the core organising group of Animal Rebellion.

Some thought that the sooner we release the intended October action, the sooner activists and those wanting to take part could prepare (and prepare for the expected resistance to our plans). Others thought it was too early. Others have the same reservations and questions that people on the march were asking.

On balance, we considered the benefits of an early announcement were greater than keeping our plans hidden. Yes, it can act as a rallying call for those who would like to resist our non-violent direct action: and already they’re flocking to our Facebook page to shout abuse! But it also acts as a beacon for all of those who believe in Animal Rebellion’s goal: to demand of the government a swift end to the exploitation of animals within animal agriculture by investing in a safe, just and sustainable transition to a plant-based food system.

Let’s get some facts straight on Smithfield

This is the reason why we have selected Smithfield in the first place: its position at the symbolic heart of the UK’s animal agriculture industry. This is a provocative and challenging goal, to go straight to the core of the UK’s relationship with the animals we use for ‘meat’ and other products.

So let’s get some facts straight about Smithfield (and show why this is an animal justice action first and foremost). This will also straighten out some misrepresentations that the media have made about who we are.

Smithfield Market is the UK’s oldest and largest ‘meat’ distribution market, selling what they claim to be ‘high quality’ products to London’s restaurant trade and ‘discerning consumers’. Smithfield and its traders pride themselves on its ‘state of the art’ handling facilities and draws heavily on its history dating back to 1174 to justify its continued role in the exploitation of animals.

But unlike what the farmer told our spokesperson Kerri Waters on Ian Payne’s LBC radio show recently, no, not every ‘meat’ product sold at Smithfield came from an animal in the British animal agriculture industry, raised on supposedly idyllic green pasture without a care in the world. Many traders in Smithfield are importing ‘meat’ from abroad, including Brazil and the US.

That farmer on LBC urged us to ‘do our homework’ and protest against the imports coming from devastating animal agriculture of larger, more intensive industries.

Well, in occupying Smithfield, we are.

And Kerri was correct: as DEFRA have identified, British farmers are importing soy and other grains from abroad to feed their animals. Most if not all cows, for example, will be brought indoors during the winter to be fed on grain; and most ‘beef’ cows switch to grain before slaughter to be fattened up on grain. Around 75% of soy is grown to feed ‘livestock’ worldwide. Much of this comes from deforested land in the Amazon, and other cleared rainforest. In the UK, around a third of all imported soy is used as animal feed.

We are not anti-farmer. That is a myth used to attack us. We want to see a healthy, plant-based food system where farmers are secure and rewarded for crop production and environmental stewardship. This is the only way forward: because even the most sustainable animal production is still worse for the environment than the most unsustainable plant-based production. (Let’s be clear: we would never want any animal production; we’re just stating facts here. Until every animal is free.)

And like the Amazon, the UK used to be covered in forest, which was cut down for animal agriculture. What humans are doing in the Amazon is what we did centuries ago. We need to repair the damage we have done to our own country, not just point the finger at other countries and the degradation of their own land. We need to re-wild — and farmers are our best allies in this, in the right system.

And even if Smithfield Market only sold ‘meat’ from the UK? Well, no, it is not okay to suggest that we Brits get to eat our ‘meat’ while it’s ‘them over there’ cutting down the rainforest that need to change their ways. These colonial and racist claims are always to be challenged. As most research shows, not only do Western countries such as the US, Australia and the UK eat far more ‘meat’ per person than countries in the global south, it is these same Western countries that have far larger carbon footprints.

But until the animal cruelty stops, we won’t stop. Look at what else is sold at Smithfield. Veal: the male bobby calves of no use to the dairy industry, that are kept in single crates, often tethered, and fed a deficient diet so as to keep their ‘meat’ pink enough for the consumer, then killed while babies.

And foie gras, the production of which is banned in this country, because it is so cruel, but that it is still legal to sell. There are many campaigns to ban the selling of foie gras here.

Claims that meat industry workers make, that Brits are somehow more ‘loving’ of the animals and animal parts we eat, are wholly blown apart when you take a look at the products sold in this market.

What about people’s jobs?

We remain deeply sorry for the inconvenience we cause in our actions. We are ordinary people with ordinary jobs too — teachers, cleaners, engineers, project managers, vets, driving instructors, schoolchildren, grandparents — who are terrified of the future that climate breakdown is bringing. We know that climate breakdown will cost all of us our jobs.

But to claim, as LBC’s Nick Ferrari did, that a ten-working-days shut-down of Smithfield will risk thousands of jobs doesn’t hold up.

And as the comments on the LBC news story of Nick Ferrari’s interview with our spokesperson Alex Lockwood suggest, Brexit is likely to lose Britons many times the number of jobs that our two-week action will. And those job losses will hit the poor and northern more, they will hit women more. We wonder if Nick asks the same question about jobs to Boris Johnson?

Our choosing Smithfield was not about targeting working-class people. If we do not avert climate catastrophe then there may be no jobs left in any industry. As many have pointed out, including Extinction Rebellion’s Rupert Read and academic Professor Jem Bendell, climate breakdown is driving our entire civilisation to a cliff edge.

Our plans are a response to the heavily subsidised animal agricultural industry, and one that includes the selling of veal, foie gras, game birds (let’s not get started about the illegality and cruelty of ‘game’ birds, shall we?). But the industry is just as horrific an existence for every pig, cow, sheep, chicken and goat that has his or her life ended when he or she desperately wanted to live. Every trader at Smithfield is part and parcel of the industry deeply responsible for those deaths, that are also, in turn, responsible for climate breakdown.

The UK government must show leadership

The UK is deeply responsible for climate breakdown, and we play our part in animal exploitation too. It is we who need to show leadership in transforming our food systems and our consumption of fossil fuels. The industrial revolution started here, in the UK. There is no country with greater responsibility — or opportunity — for transforming the status quo when it comes to climate breakdown.

We know that we need to act. And we know that non-violent civil disobedience has been part of every successful social justice movement, from the Suffragettes to Martin Luther King’s Civil Rights marches.

In that, the launch of the new nationalfoodstrategy.co.uk initiative is window dressing. Another year-long exercise to tell us what we already know? What the UN has already said? What the RSA’s Food, Farming and Countryside Commission have just spent the last year researching? That we need an urgent transition to a plant-based food system.

Our target is the government, and we are demanding it lead the transition of the UK to a plant-based food system, investing in and supporting farmers and workers into new and more secure jobs. We already know most farmers in the UK who raise animals also grow crops, such as beet and grasses, to feed their animals. Working with, for example, the Vegan Society’s Grow Green campaign, there is a huge opportunity here to improve the UK’s food security and food sovereignty. And to transition Smithfield into the biggest, brightest, boldest statement of the UK’s investment in its own future, as a new fruit, veg, grain and pulse market (plastic-free, too), as a statement of our intent to take climate breakdown seriously.

This is why we announced Smithfield Market as our occupation site so early. It gives us the chance to build a movement, plan well, and talk in public about this transition with a clear, definable subject at the heart of our story.

But Smithfield is not our only target. Watch this space…

We wish to stand in alliance with all of those who fear for the future, and want to act. From farmers to city workers to environmental and animal justice activists, we will only bring about the change we need if we stand in solidarity together, with love in our hearts, ensuring the future is fit for every animal, as much as it is for we humans.

Why 10,000 Animal Rebels are Occupying Smithfield Market in October

One thought on “Why 10,000 Animal Rebels are Occupying Smithfield Market in October”