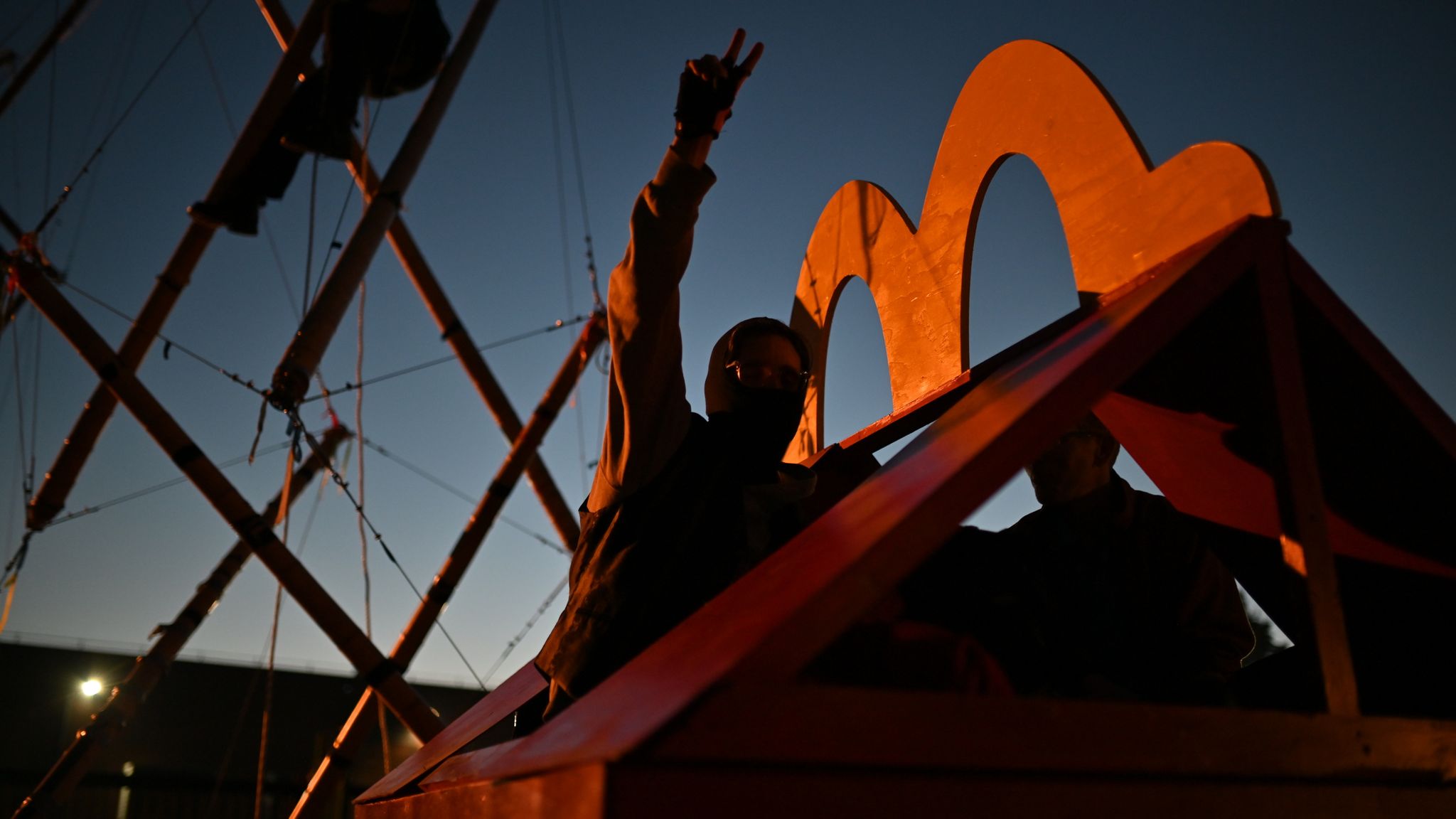 If we have any chance of slowing down climate change, the rampant and widespread deforestation taking place in Latin America must be stopped, and fast. Many of us are aware of the monumental problem that is deforestation and make efforts at an individual and collective level to recycle, use less paper, and donate to charities who plant trees. However, what we might not be aware of is that we are sabotaging our own efforts to protect these habitats through our dietary choices, in particular by stopping off to grab a meal at one of the world’s most popular fast-food chains: McDonald’s.

For those of us in the UK, we may wonder how buying a burger from a McDonald’s outlet halfway across the world from South America has anything to do with the deforestation taking place in the continent. Here’s how.

McDonald’s buys most of their chicken from Cargill, an American global food corporation founded in 1865, now one of the largest privately held corporations in the United States. Cargill has evolved into a food-product empire and has enormous power, with a vast proportion of the world´s main agricultural commodities passing through its hands.

There is no reason any British consumer tucking into a Chicken Burger or McChicken sandwich would ever know that an American company is involved in almost every step of their foods’ production. Or, more importantly, that areas of rainforest have been flattened in the process.

In the early 2000s, deforestation rates in the Amazon were shocking. Following campaigns from environmental groups and retailers, companies like Cargill agreed not to buy soybeans grown in newly deforested areas of the Amazon in the 2006 landmark Amazon Soya Moratorium. This worked, and from 2004 to 2012  the clearing of trees in the Amazon fell by 84%. But of course, it didn’t work for long. Cargill and McDonald’s put profit before the planet, and simply found loopholes in the moratorium to ensure they could continue buying soya grown on deforested land.

Companies like Cargill simply began buying from soya plantations in the Bolivian Amazon and the Brazilian Cerrado according to a Mighty Earth report. The cerrado is a crucial ecosystem containing 5% of the world’s plant and animal species. More than half of its native vegetation is already gone due to deforestation.  In addition, with the moratorium applying only to soya in particular, farmers have been able to sell their crops as deforestation-free as they continue to clear land for cattle, maize and other commodities. Consequently, deforestation has continued and reached an all time high last year.

Efforts to extend the soy moratorium to the Bolivian Amazon and Brazilian Cerrado have long been opposed, despite calls to do so by local NGOs, scientists and the Brazilian environment minister. Retailers have so far not used their leverage over Cargill to compel it to support a soy moratorium expansion. Being Cargill’s biggest customer in Europe, McDonald’s would have huge influence. The company however, would appear to care far more about soy reaching Cargill´s chicken processing plant here in the United Kingdom Hereford. Cargills’ Hereford site slaughters over a million birds per week, many of which will go on to be sold in McDonald’s branches across the United Kingdom.

Brazil is the biggest producer of soy consumed in the United Kingdom, and 70 percent of it is imported into the UK by Cargill, the vast majority of it to become animal feed. Only about two percent of the world’s soy crop is processed into plant-based alternatives such as meat alternatives, tofu and soy yoghurt . It is  mostly grown in Europe and does not drive deforestation.

With their poor track record on deforestation becoming increasingly obvious to consumers, McDonald’s announced a series of ‘’ambitious’’ sustainability initiatives in October 2021. The company explain on their website: ‘’We want to make sure the beef in our burgers contributes to a sustainable food system in which communities, animals and the planet thrive.’’ Animal Rebellion has a very different idea of a sustainable food system. In our eyes, flattening rainforests, slaughtering millions of animals, and selling a ludicrous quantity of largely unhealthy products is in no way sustainable.

McDonald’s sells more than 75 hamburgers per second. Each year McDonald’s buys 1.9 billion tons of cow flesh to be used for patties in outlets across the world, producing more than 53m metric tonnes of greenhouse gases. The fast food giant stresses its burgers sold in the UK come from British and Irish farms, but have been accused of feeding animals with feed  coming from deforested areas in Latin America. Glenn Hurowitz, chief executive of Mighty Earth highlighted that ‘’everything we know about their suppliers suggests they’re still chock full of deforestation.”

Despite McDonald’s massive and ongoing role in the destruction of primary forests, it has gained several certification labels. For example, there is evidence that the Rainforest Alliance, who certifie McDonald’s coffee, uses child labour in their farms. In addition, the RSPCA has given its stamp of approval on McDonald’s chicken factories, instead of telling the truth and highlighting that captivity and death can never be aligned with good welfare standards. Instead of standing up for the animals, RSPCA complies with the big business. The labels on meat and dairy do little but confuse and greenwash. They are certified lies.

McDonald’s recognises their own complicity in deforestation by stating on their own website:  ´´We’ve set an ambitious goal to eliminate deforestation from our global supply chain by 2030.´´ It is difficult to take this, and all of McDonald’s other sustainability targets seriously, as not only is the breeding of cows the largest driver of deforestation in the world, with beef potentially being the single most environmentally destructive food in existence.

According to landmark environmental documentary Cowspiracy, cows are the world’s largest source of methane, which is up to 100 times more destructive to the climate than CO2. Cows around the world produce 150 billion gallons of this gas per day. Raising cows is incredibly resource draining with a staggering 2,500 gallons of water needed to produce just 1 pound of beef. This means that the production of one hamburger requires 660 gallons of water – the equivalent of the average person’s showers over a period of 2 months.

Raising cattle also requires a huge amount of land, which is why so many forests are being cleared to make room in the first place. According to the Cowspiracy, 1.5 acres of land can only produce 375 pounds of beef as opposed to 37,000 pounds of plant-based foods. Rearing livestock and their feed already occupies up to 45% of the earth’s ice-free land. With the demand for meat being so large, there is still not enough space to raise the animals to feed our appetite and more forests are having to be cleared. Where will this end, with the whole planet being deforested and devoted to meat production?

By selling huge quantities of these catastrophically polluting foods, at the expense of both animal and human kind, we believe McDonald’s to be running one of the most polluting and morally corrupt operations underway in our world today.

Animal Rebellion calls on McDonald’s to stop this madness and transition to a fully plant-based menu by 2025. After all, this is the only hope the company has at meeting their climate goals. Climate experts who reviewed McDonald’s targets say: ´´The company is largely dodging the one bold step it must take to slash emissions: dramatically reducing the amount of beef it serves. Not moving boldly on their menus suggests motivations might not be to mitigate climate change but to manage investors.”

Gidon Eshel, an environmental and urban studies research professor at Bard College says: ´´The naked truth is McDonald’s is in a business that is fundamentally at odds with the Earth’s integrity. The culture of beef is not consistent with Earth’s wellbeing, and we have to choose: do you eat beef and let Earth incinerate, or do you forgo beef and give Earth a fighting chance?”.

The answer is simple. McDonald’s must cease to sell products which cause deforestation and pollution and transition to a fully plant-based menu, now. The introduction of one or two plant-based products is, at this point, a drop in the ocean. We need a complete and thorough reinvention of the McDonald’s menu and we need it now.

Join Animal Rebellions campaign No Love In It for McDonald’s to transition to a fully plant-based menu by 2025. Take a look at some of our previous actions here including the blockade of McDonald’s UK burger factory for 3 days, the overnight occupation of McDonald’s Leicester Square and sit-ins across the country. Please fill out our Volunteer Form to get involved with what we´re planning next!