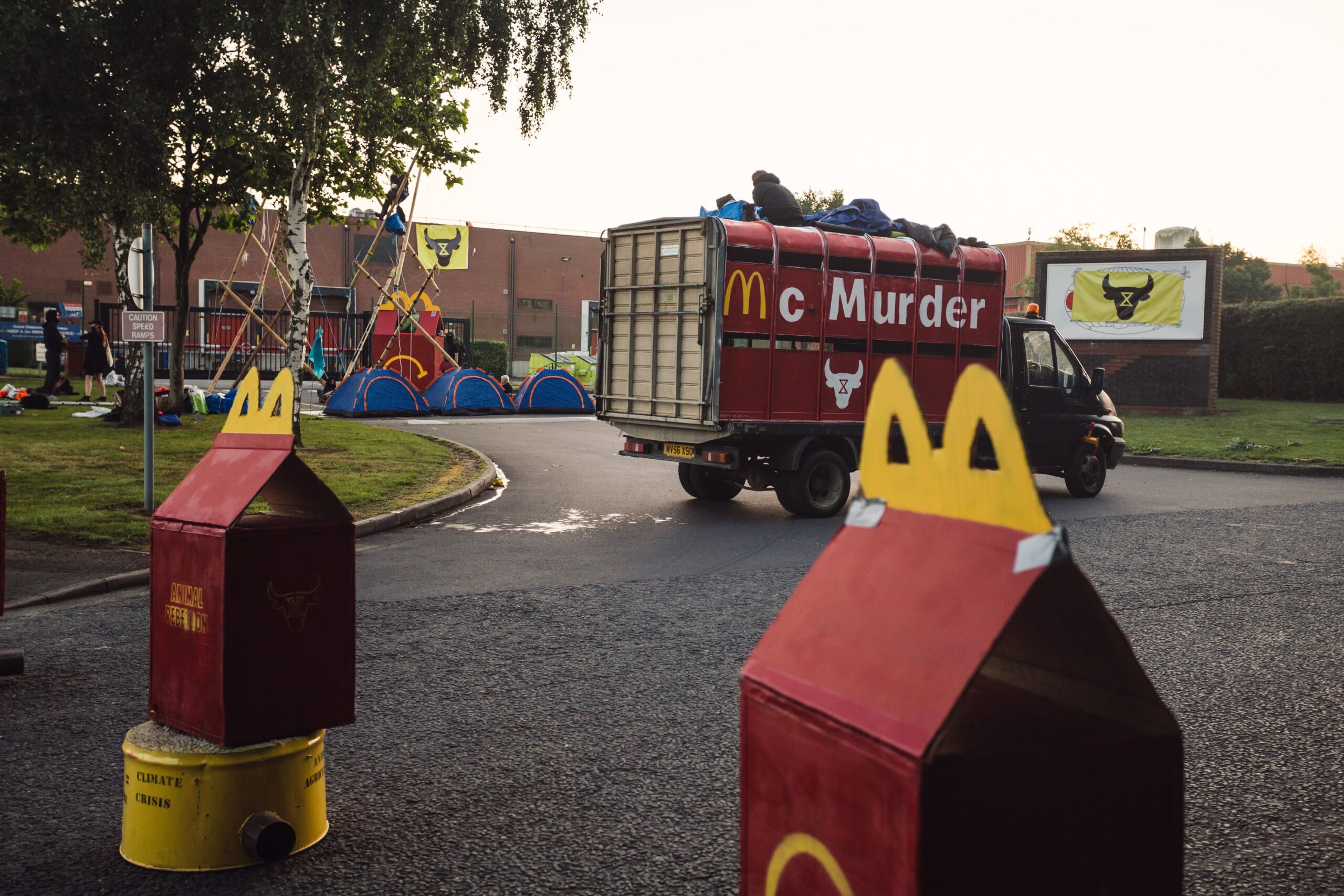 Animal Rebels occupy McDonald’s to demand the fast food restaurant chain to go fully plant-based by 2025 for the animals, people and the planet. Click here to read the first press release and here to read the update after 24 hours of blockade. Our blockade showed us that around a few dozens of people can shut down one of the biggest brands in the world. We are here with solutions and ask the biggest fast-food company to transition to a sustainable and plant-based only system.

A small group of people took on a giant. Why? We target McDonald’s because they are the perfect illustration of a system that unapologetically destroys animals’ bodies, society’s wellbeing, and the environment. McDonald’s is a symbol of a system that causes the environmental and climate emergencies and creates injustice. It favours profit over everything else, as shown in this video. We will put a stop to the destruction done by the biggest fast food chain. We are the 99% of the people who want a just and sustainable future and we act non-violently for justice. We walk in the footsteps of Gandhi, Rosa Parks and Martin Luther King by using civil disobedience to make our voices heard. Who said David could not defeat Goliath?

The fast-food giant has a history of making profit by exploiting workers. People working in the supply chain of animal products face poor working conditions.

McDonald’s workers went on strike to ask for better salaries and protection against sexual harassment. 5000 women filed cases to fight the systemic sexual harassment in the company as complaints did not lead anywhere.

Poverty and job insecurity are the norm at McDonald’s – except for the chief executives who get millions of pounds in bonuses. The workers filed complaints about their hazardous working conditions. The fast food giant puts employees at risk of violence, which is another source of stress.

These working conditions are not acceptable. Together, we can create a world where workers are paid fairly and treated with respect. We want safe and decent working conditions for everyone. Food justice is social and global justice.

Animal agriculture is a leading cause of the climate and environmental emergencies. People, especially in the global south, are already on the front-line of the environmental breakdown, facing disastrous floods, air pollution and tornadoes. Animal agriculture would only lead us to more severe weather events, higher temperature and sea rise.

Currently, 80-90% of Amazon deforestation is related to cow farming. An investigation by Mighty Earth revealed that the cows killed for McDonald’s meals are fed with soybean cultivated in deforested areas in Bolivia and Brazil. Pollution from these soybean crops makes people ill.

McDonald’s kill animals. But cows, chickens and fishes are sentient individuals, who want to live and enjoy relationships with their family and friends. Scientific studies have shown that cows have different personalities, just like us. Animals are not objects to be used.

In 2019, McDonald’s was worth almost $150 billions. Through reductions in costs of making and selling their products, McDonald’s currently makes billions of gross profit per year. Meanwhile, in the UK McDonald’s workers make on average £7.83 per hour. Surely, with this sum of disposable money, the fast food giant can take actions that make a positive impact on our environment. At the same time, global consciousness on the climate and environmental emergencies is rising, so the fast-food giant did not hesitate to portray itself as eco-friendly. But switching from plastic straws to non-recyclable cardboard ones is far from addressing the core problem: meat and dairy.

McDonald’s can stop hurting animals, people and the planet on a massive scale, because climate, social and animal injustice are connected to animal farming. Expert organisations and scientists have concluded that plant-based food systems are a key solution to solve the environmental and climate emergencies. We cannot solve the climate emergency without addressing the animal emergency. Beyond greenwashing and false promises, McDonald’s needs to transition to plant-based meals. Plant-based options are both tasty and available. Yet McDonald’s has been refusing to act and continues the most destructive practices in the name of profit.

Sustainable plant-based eateries with decently paid employees are already leading the way and show what a plant-based McDonald’s could look like. The plant-based Impossible Burger has a 89 % lower carbon footprint than a burger made of cows. We need a food system change to halt the climate crisis, save animals, and stop worker exploitation. This big change can only be brought about if giant companies like McDonald’s show leadership and transition to plant-based meals by 2025.

People have the power to make change

We are ordinary people who ask for a transition. We cannot let injustice happen again. We need to act now to reverse climate change. Throughout history people have risen up and seen the world change around them. Together, we have the power to make the fast-food giant listen to the climate science and show compassion.

We acted because meat and dairy production are not normal, natural, nor necessary. How broken is a system where it is normal to grind to shreds thousands of chicks every day? We can imagine a better future with plant-based food systems, away from the path of destruction that animal agriculture puts us on.

Big corporations have a responsibility towards people to listen to science and make the changes that are needed. As the largest fast-food chain, McDonald’s has the potential to make positive waves for the planet and future generations. It is its duty to shift to just and sustainable plant-based meals. By transitioning their menu, McDonald’s can set us on this path and make necessary transitions easier for ordinary people.

Join the movement to make McDonald’s go plant-based by 2025. People from all walks of life have organised, because acts of civil disobedience can lead to system change. When it’s an issue as important as climate, animal and social justice, we can unite. We ask them to act for global compassion instead of greed.

This is our moment to make change. Come down, bring your tent. This is our chance to make history.

Take direct action against to put pressure on McDonald’s.

Read more about our No Love In It campaign.

Watch our new 22-min documentary YOU HAVE FOUR YEARS. It shows the lead up and unfolding of our previous action that blocked all four McDonald’s UK distribution centres on May 22nd.

Why We Occupy McDonald’s

One thought on “Why We Occupy McDonald’s”